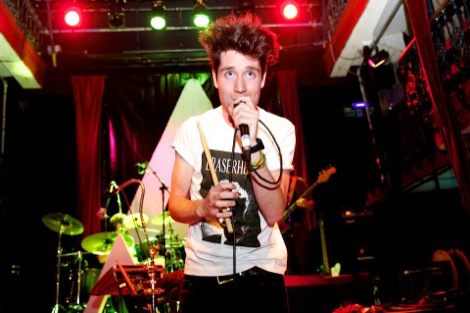 Sessions with Huw Stephens, one million Youtube hits and counting for recent single Bad Blood and even shouts from little ol’ X Factor mug Dermot, Bastille are seemingly doing quite a bit right these days.
The Liverpool University Guild of Students was the latest place to lap them up with heavy adoration, playing host to their haunting melodies and intricate washes of synths.
The subtle use of digital sounds, instead of the saturation of electrics which so many others are guilty of, is used to evoke emotions paired with lyrics that sound more like little stories than songs.
The London collective’s fan base was out in force donning skeleton masks from recent release Flaws while singing along to every lyric of every song, leaving lead singer Dan Smith clearly overwhelmed.
Amid repeated cries of ‘You look like Nick Grimshaw,‘ (clearly a reference to some impressive hair quiffage), the band tackled intriguing covers including City High‘s What Would You Do?‘ and Corona‘s club classic The Rhythm of the Night both of which worked a treat.

Earlier, support came from Manchester’s Swiss Lips. From nondescript first impressions, the quartet surprised with a set of catchy electronic pop that recalled Two Door Cinema Club fused with a flicker of MGMT rounding off a superb night of synth-orientated sounds.