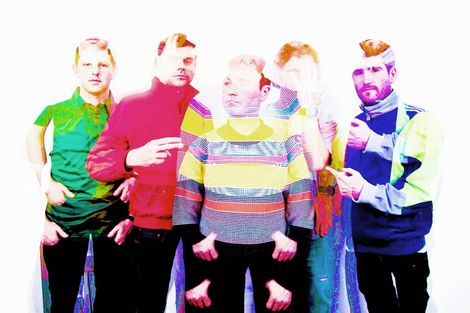 Not since The Smiths were shoed off have Ormskirk music night’s been this exciting.
Edge Hill University are bringing some serious noise back to the campus with the launch of a new gig night on their campus with several GIT Award nominees kicking off proceedings.
Music hall board-breakers The Tea Street Band, lo-fi carnage firecrackers Death At Sea and springheeled sonic surfers Ninetails are all among the talent unveiled at a new night called Cantina.

Collaborating with Liverpool Sound City, Cantina, launches on Friday October 5, and is set to become the regular Friday night in the Student union venue
The initiative was launched by The Farm‘s Carl Hunter, senior lecturer in Media at Edge Hill.
Carl said: ‘There has been a long tradition of live music on campus and it’s great that it’s back after many years.
‘I remember playing here with The Farm myself and have some great memories! Some really big names played here back in the day, including The Smiths, Siouxie and the Banshees, and I’ve always wanted to have something like this recreated so that our students can be involved in live entertainment, both as participants and spectators.
Also joining the bill are Getintothis-approved kraut-folk siren Eva Petersen, hip-hop soul newcomers Coffee and Cakes For Funerals and beatpop jumper botherers The Hummingbirds.
Ormskirk market goers really are in for a treat.

‘It really complements the new Arts Centre offer here, providing another strong on-campus social event. Cantina is an antidote to mediocrity,‘ Hunter said.
SU Chief Executive Paul Malone added: ‘There is also talk of us becoming involved in the annual SoundCity Festival and UK Student Music Awards, including participation and work experience, which will increase employability opportunities for students who become involved. We’re delighted that the SU have been able to help make this all happen.‘
The line-up for this month is:
October 5: Tea Street Band
October 12: Death at Sea and Ninetails
October 19: The Hummingbirds and Eva Peterson
October 26: Coffee and Cakes For Funerals and Ady Suleiman
If you’re off for a pre-gig bevy in Ormskirk, Getintothis recommends The Queen’s Head for the best pints and Lyme Tiger for some serious cocktail action.
The Venue is a members club for students and staff. Tickets for the gigs are available from the Students Union are £2 with an NUS card or £5 without.
Students who click ‘Going/Attending’ on the Cantina Facebook event page can pick up a FREE ticket until 5pm on Friday.
Edge Hill University