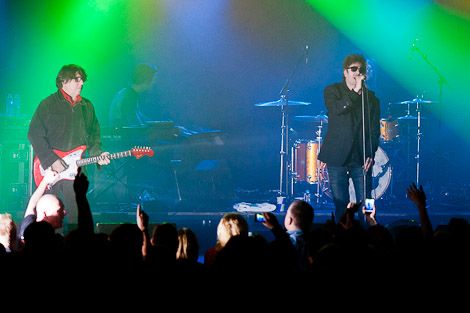 Echo and the Bunnymen deliver a storming Christmas cracker as an unusually subdued Ian McCulloch lets the music do the talking. Getintothis’ Andy Kelly joins in the mass singalong at the O2 Academy.

A great night with a great band. Another enjoyable chapter in what has become a most welcome modern Liverpool Christmas tradition.
Can I just stop there? Do you need another 300 words?
You see, after seeing quite a few of these nostalgia-filled seasonal homecoming shows and reviewing a good few too, I’m not sure what to say about Christmas with Echo and the Bunnymen any more.
The songs have stood the test of time, some a barely believable 30 years old plus now. They speak for themselves and if they don’t, the man who sings them is usually no retiring violet in singing their praises.
Except, well not tonight.
It is an unfamiliar Ian McCulloch this sell-out crowd glimpses through the obligatory dry ice and back-lit gloom at a full-to-bursting O2 Academy.
There is none of the usual Mac banter, unpredictable, funny, inflammatory, baffling, magical, intoxicating. There’s no ‘This is the greatest song ever written‘ intro to The Killing Moon. The only words one of the great stage wordsmiths of our time mutters through the whole show are several ‘thanks for coming‘.
He seems pretty straight and that definitely looks like water he’s drinking in the shadows. Maybe the afternoon events at his beloved Anfield had proved all too sobering?
But what Mac lacks in banter is made up for in the quality of his vocals which has not always been the case in recent years. The songs get all his attention tonight and the evening’s none the worse for that. And what songs they are. 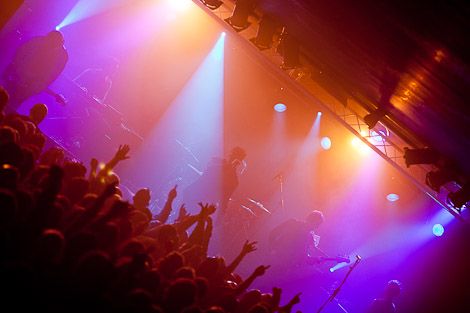 Within the first 10 minutes they’ve got the front rows bouncing to Rescue and an admittedly rather perfunctory Do It Clean.
Villiers Terrace is all edgy paranoia and the bassline to Never Stop recalls those other great survivors of post-punk, The Cure.
While Mac does his thing up front, guitar genius Will Sergeant takes up his traditional position stage left, hunched almost motionless over his instrument, spitting out his lines with never a solo in sight. An impressive four piece band augments the two originals.
You never have to wait too long for another classic to come along and it’s Seven Seas which produces the first widespread singalong of the night with everyone ‘kissing the tortoise shell‘ with joyous abandon while Bring On The Dancing Horses almost sneaks up on us before its familiar chorus increases the sweat level even more. 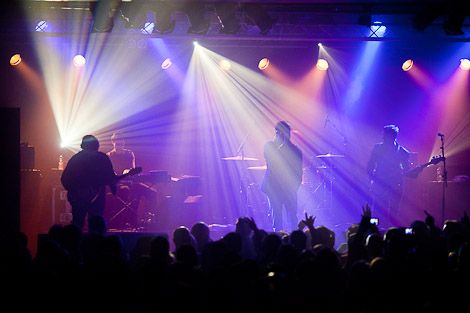 Topping up at the bar, we hear one unhappy casualty suggest, somewhat incredibly, ‘they’re playing all the weird ones‘. Maybe he missed the 80s? Or maybe he just didn’t enjoy Bedbugs and Ballyhoo, maybe not played as often as some of the Bunnymen canon but a welcome addition tonight.
The main set ends in astonishing fashion, The Killing Moon as ever worthy of the superlatives Mac dispensed with tonight and followed by maybe the best version of The Cutter we’ve ever heard – Sergeant’s finest hour tonight.
Two encores include the great orchestral tone changer of Nothing Lasts Forever before Lips Like Sugar – so often thrown away early in the set – is transformed from three-minutes of pop perfection into a full-on, sprawling epic.
Most, myself included, were probably expecting Ocean Rain to conclude matters but the band – probably wisely – decided it was time to leave with the crowd still wanting more.
They’ll be back in April in that tasty looking double header with James but for now we can be satisfied that some Christmas traditions really are worth preserving. See you in 2013! 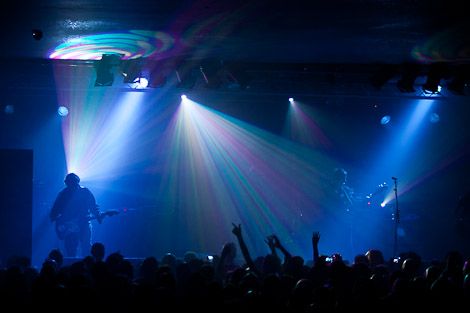 Getintothis talks to Will Sergeant on his new record and his love affair with psych music.
Getintothis reviews Echo and the Bunnymen live at the ECHO Arena performing Ocean Rain.
Pictures by Getintothis’ Keith Ainsworth