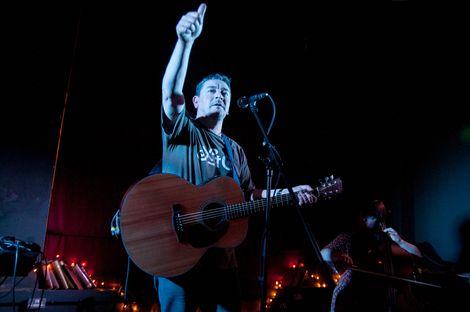 Shack icon Mick Head makes a triumphant return to the stage at Leaf mixing golden oldies with a plethora of new nuggets – Getintothis Sean Bradbury joins the sellout crowd in saluting one of music’s lost heroes.

“This one is for Alice,” says Mick Head. “She’s had to put up with me for 20 years.”
“So have we all,” comes the inevitable shout from the front row.
It may be the depths of a cold December, but the packed upstairs room at Leaf is bristling with warmth and affection for Harvest Sun‘s improbable, early-Christmas-present booking of one of the city’s finest songwriters.
A magical evening with Michael Head begins with Cadiz before a bit of flirtation with the crowd – “Love you Mick!” says a female voice, “What’s she look like?” batted back from behind the microphone – sees in My Pretty Girl.
Initially there are nerves, there is a slight vocal waiver, there are false starts – but there are instantly timeless melodies and heartening signs of a restless musical creativity that will not be repressed.
There are more ‘new ideas‘; Winter Turns To Spring is a vintage Strands story over sweeping waves of acoustic guitar, serenely surrounded by the sound of Andy Diagram‘s trumpet and the Mono LPs’ Victoria Mutch‘s cello.
Mick takes a solo spot with a perfect As Long As I’ve Got You – the shortest, sweetest and scousest love song there is – then a cover of The Doors‘ Crystal Ship. Tara K, a distant memory that has thankfully been rekindled, and a dedication to the Tea Street Band – several of whom are in attendance – follow before the other musicians return. 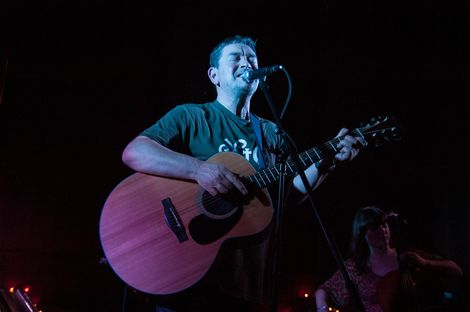 A rousing rendition of The Prize, complete with psych wig-out induced by Andy Diagram delivering echo-soaked vocals through his trumpet mic, a delicate Meant To Be and a triumphant Undecided bring the main set to a close. Mick takes to the stage again for Daniella and signs off with Love‘s Maybe The People Would Be The Times Or Between Clark And Hilldale.
Is it even worth mentioning? Only because this was so, so different. Almost a year ago, Mick’s festive gig at The Brink bar was brought to a premature end. Tonight, Leaf revelled in his resurrection. 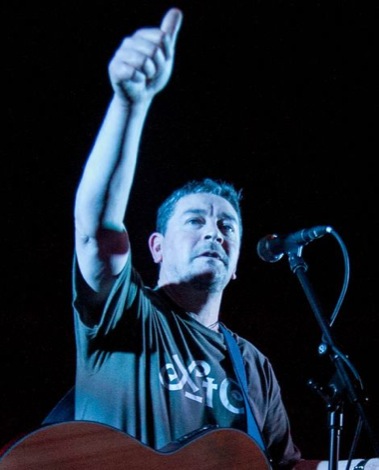 Earlier on there was another revival in the form of The Sand Band, whose demise it seems has been greatly exaggerated.
Despite the new personnel and the lack of pedal steel, the purity of David McDonnell‘s musical vision still shines through.
Set Me Free aches with emotion and while When We Kiss sounds restrained as unfamiliar hands get to grips with it, it has the bare bones of brilliance and the scope to change gears as potently as The La’s Looking Glass.
Getintothis talks to Harvest Sun on their momentous year in Liverpool music.
Pictures by Getintothis’ John Johnson