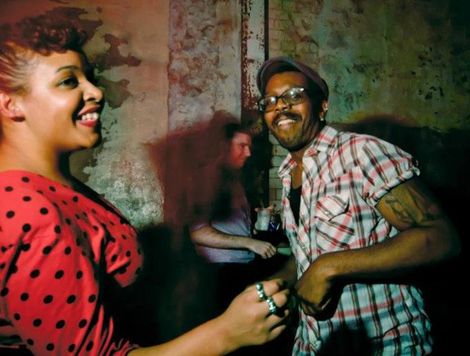 Chew Disco returns to Liverpool on Saturday for a night of salacious hedonism. With that in mind, Chew Disco resident, Khalil West drops Getintothis an exclusive mix. AWESOMENESS abounds.

Chew Disco, the Liverpool-based alternative club night, queer punk party and /performance art project returns to the Kazimier on Saturday.
And to celebrate the return of one of the most intelligent, radical and downright funky collective’s this city’s ever known, we’ve enlisted the help of Chew Disco‘s top cat Khalil West to provide a fresh off the block mix of choice cuts.
As DJs, Chew Disco have supported MEN, Bonjay, Japanther, Shellac and GHXST plus loads of other rad bands.
They were also super adept at making EVERYONE dance their behind’s off at the GIT Award 2012 where Khalil and right-hand dude, Emma Obong manned the decks throughout the night.
Expect a mix equal parts vintage house party jams, 80s trash, club classics, no-wave, new and old school hip hop and plenty of alternative anthems.
All of which can be experienced first hand at the Kazimier on Saturday (February 2) when London no-wavers Trash Kit, disco noise trio Queer’d Science, and lo-fi Mancunians Sex Hands add to the thrills.
Chew Disco: body like Arnold, face like Denzel. Enjoy.