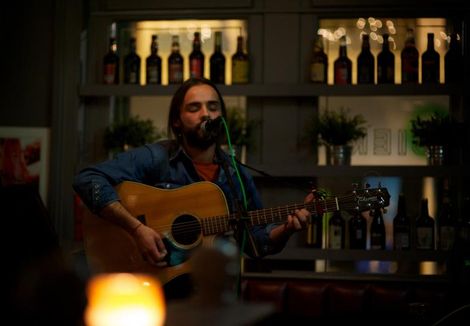 The Writers Club at Bier evades open mic cliché offering a refreshingly refined evening for Liverpool songsmiths to play their trade. Getintothis’ Stephanie Heneghan pulls up a pew and tucks into the free pizza.

In it’s previous incarnation as The Old Ropewalks it was open mic 24/7 with the out of tune karaoke shrieking escaping through the door as you’d walk past.
They were far from halcyon days for anyone other that the singer clutching the microphone – there are only so many ways you can murder Islands In The Stream.
Since it’s been adopted, repainted, rebranded and relaunched as Bier, the musical offering has greatly improved.
This is something the gang at Bier take seriously, especially the championing of local unsigned bands that they add to their in house playlist.
There’s also a band wall with the names of noted local acts written on it.
Getintothis was in there recently with a mate who stared at it for a while and then triumphantly declared, ‘Ha! I can’t believe they forgot to put THE BEATLES on there!‘ They hadn’t. Pretty embarrassing.
As part of supporting the local music scene, Bier have collaborated with Milk:Presents to hold a weekly open mic night, Writers Club.
Open mic nights can be an unpredictable animal, we’ve been to some shockers in the past with bedroom superstars holding an audience captive as they wield a guitar like a weapon and shout incoherent poetry for verse after verse.
However we were lured down to Writers Club after hearing good reports of previous gigs. Oh, and they were dishing out free pizza. We’ll do pretty much anything for free pizza. 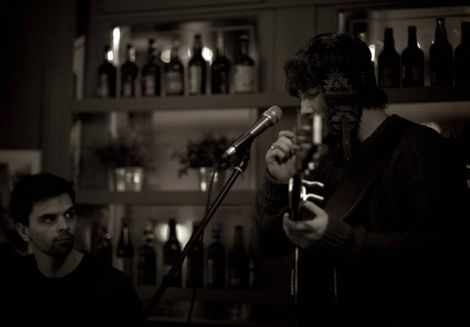 Liverpool musicians and fans soak up the surrounds in Bier for Writers Club
Bier is a cosy venue, even more so when you fashion a make shift stage in one corner of it.
We arrived to catch the end of Ste Neild‘s set, with the refrain of Echo, Echo ringing out.
Next up was Ed Poole, resplendent in lovely bit of knitwear (to use our exact notes “a Christmas jumper”) and in fine voice with a track called 95 being the definite hit of his setlist. He was followed by Louis Berry and the lead singer from local act, Reva.

The talent on show tonight are not strictly amateurs if truth be told, we’d already seen a few of them in various showcases around the city and so there were little nerves in evidence, few bum notes or dropped lyrics.
One guy who is definitely not an amateur is Mark Frith, of The Troubadours fame.
Closing his set with some Bob Marley and an audience request of The Jam led to A Town Called Malice and a bit of a singalong. We did not sing along. We were too busy with our pizza.
Ahh yes, the pizza. Let’s cover the important business. Opting for an American Hot, our companion chose the Hawaiian (much to our disdain – pineapple does not belong on a savoury setting).
For a Wednesday evening, you really can’t do much worse than sitting in a decent little pub, eating pizza and watching some decent local acts perform for free.
We can absolutely promise you that there is no adhoc poetry to be found, zero scat jazz in evidence and no Bonnie Tyler tribute acts. If this sounds a disappointment to you, I think you might be better off taking a trip to The Vines.