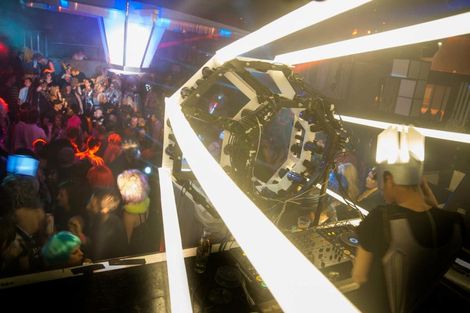 A one-in-a-lifetime intergalatic trip courtesy of the Kazimier, Getintothis’ Marie Boon steps into a new dimension.

December 2012 may not have meant the end of the world as we know it, but any earthling who stumbled across the Kazimier‘s working film set on New Year’s Eve almost certainly presumed they had in fact stepped into post-apocalyptic pandemonium.
Proceedings commence in an intergalactic karaoke bar located on the Quartz Moon where native revellers and ‘interplanetary freaks’ alike have congregated to see in the new year amid raucous merriment.
Some or other intergalactic creature takes to the stage in a warped impersonation of a futuristic Freddie Mercury, and glancing around the darkened club at the seedy looking space-characters just as the K kicks in, there is no doubt in my mind that we are actually, physically inside the Mos Eisley Cantina…or maybe the Blade Runner strip joint.
Cut to scene 10, and the whole club pixelates before our very eyes. We’ve been transported to the Binary Dimension where Captain Kronos is being pursued by giant Tetris and zapping space invaders in a real life black and white 8-bit computer game. 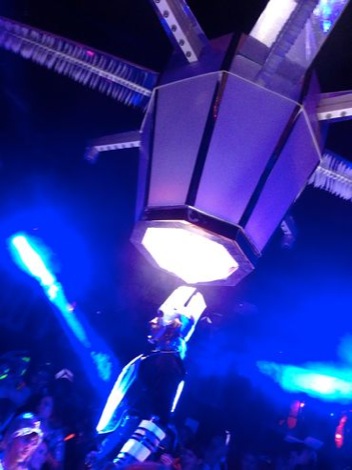 Further trouble ensues when the Assembly of Doom capture the Captain and strap him to a spinning wheel ready for execution by ray-gun, a weapon of which there is no shortage among the obliging black and gold extras.
An armour-clad band of evil musicians serenade the revolving rocketeer with an intergalactic death knell until a scene-change shifts the action to the centre of the dancefloor for a climatic countdown to midnight.
Space-suited and booted, the drum ensemble pound out a dramatic beat around the newly escaped Captain Kronos with a giant spaceship suspended above them. The Quartz Moon civilisation have now gathered around, adorned in white robes and bearing crystal light-sources, ready to present their offerings to the guardian of time, Kronos, at the stroke of midnight.
Thirty seconds to go, the drumroll intensifies and a cylindrical arm protrudes from the overhanging spaceship, engulfing the room in a thick cloud of smoke and enveloping Captain Kronos entirely… as the clock strikes twelve the smoke disperses and the Captain has vanished: all that remains is a room full of space-men (in every sense of the word), hugging, kissing and bidding each other a delightful new year…
Hats, helmets, and crystal crowns off to the Kazimier crew – you never cease to amaze and entertain.

For more Getintothis coverage of the Kazimier you can read our end of 2011 review, our exclusive chat with the team, our review of their most ambitious project to date – Atalonia or watch and listen to the Atalonia video and soundtrack.
For a full photographic look at the Kazimier’s The Kronos Begins follow this link.