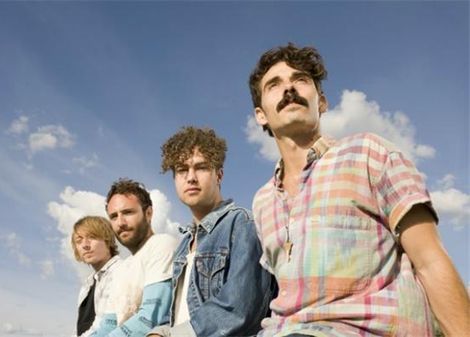 Local Natives experienced death and losing a band member while making new album Hummingbird, however as they prepare for their date at Liverpool’s Kazimier, they tell Getintothis’ Tom Dani it’s led to a more creative rebirth within the band.

It’s been over three years since Local Natives introduced themselves to the masses with their debut Gorilla Manor.
The band’s debut received gleaming reviews, showcasing a band so artistically coherent that it was mind blowing to hear this was their debut venture.
The album cycle for Gorilla Manor launched the LA band onto a global platform and saw Local Natives headlining tours across North America and Europe, as well as supporting the likes of Arcade Fire, Edward Sharpe and The Magnetic Zeros and The National – the latter inviting the band to appear on their curated ATP event in November.
In the time which passed between the end of their debut and the recording of their new record, the band were put through a high level of emotional strain; loosing family members and even parting ways with bassist, Andy Hamm. Moving forward to January 29 2013 and the band have released their highly anticipated follow up, Hummingbird.
The band state that this record is born from the emotional frame work of being stretched across two opposite poles, always a collaborative band, the now four-piece faced writing their follow up as a unit in face of the highs from their debuts reception and the lows of the turmoil that followed.
The band enlisted the help of new found friend and multi instrumentalist of The National; Aaron Dessner to produce the record, a role that was previously done solely within the band. Hummingbird is undoubtedly a deeper offering, blending the sounds of Gorilla Manor with the frailty of the band as a result of the writing process resulting in a unit boasting eloquent songwriting, and delicate composition.

Getintothis caught up with Kelcey Ayer just ahead of the band’s performance on Jimmy Fallon in the US to catch up before they visit the UK for their string of headline dates.
Getintothis: It’s been three years since the release of your debut, you’ve been gone for a while, how does it feel to be back?
Kelcey Ayer: We just finished a week of shows today and we’re going to pretty much start touring the record now, so its going to be a lot of shows coming up. I haven’t really felt touring hit just yet, but really soon I’m sure.
Getintothis: Local Natives have always undertaken a heavy touring schedule, how do you feel this has shaped the band – do you consider yourselves a live band or do you prefer the studio environment?
Kelcey Ayer: I definitely would say I feel like we’re a mix of both, we really enjoy our time in studio, but we really enjoy playing live. We really enjoy bringing the songs to life in a different way, listening to the music live, opposed to on record definitely brings the songs to an audience in a whole new light.

Getintothis: Having worked with Aaron Dessner on this record, how do you feel he contributed to Hummingbird – why the choice to work with a producer this time around?
Kelcey Ayer: We wanted to work with somebody in a creative capacity if it was going to be outside of the band. We were looking and no one really felt right in the end and we didn’t want somebody to whom it was a day job.
We just wanted someone who could really help up make the record. He comes from a background where he really understands the process of being in a band, not just in engineer and producer way, more as a collaborator; he was kind of an overall helping hand throughout.
He started to become kind of a big brother to us, he had so many wise things to say, and there was such a great vibe throughout. He’s an impressive dude and really the only one we felt right going forward with as its really a passion project for him, he’s a genuine fan of the band and what we do.
Getintothis: You’ve stated that this album really emphasises the emotional state of the band whilst writing. How do you feel that this record has changed and developed the band?
Kelcey Ayer: Well I mean we always write about what we experience and what we know from our own experience. Personally I feel that I now really understand my own voice, I like to explore my thoughts and feelings and put that into our own music.
The last few years had things that were kinda tragic, its definitely led to us making a darker record. We’ve definitely built up ourselves as songwriters, which in turn allowed us to really approach making this deeper record together. We never set out to make a record like this; it just developed through the process.
Getintothis: Gorilla Manor received endless praise for its strong artistic direction – what did you want to achieve with Hummingbird – did the thought of a follow up make the band nervous?
Kelcey Ayer: I think for the most part we just wanted to make something we were proud of; any nerves, and any pressure came from each other.
I don’t think anyone was trying to meet any specific fan base or sound, we wanted to write a record for ourselves. If I were able to impress Taylor (Rice), Ryan (Hahn) and Matt (Frazier) it would be a huge triumph. We’ve always been a really collaborative band; no song goes ahead unless the four of us all love it.
Getintothis: Local Natives are such a tight, collaborative band, how difficult moving on from losing Andy?
Kelcey Ayer: In that way it actually made things easier, because there were less cooks in the kitchen, so to speak.
As devastating as that was, I think that it definitely lead us to a more productive place. I think that it lead us to be more focused, and then also an unexpected thing was to be more reliant on recording.
We’d been so focused on writing songs to play live and now we approached things with a new dynamic. We had to rely on recording more, we were able to approach things differently in production and be creative in a new way.
Local Natives‘ new album Hummingbird is out now of Infectious Records and they play Liverpool’s The Kazimier on February 12.