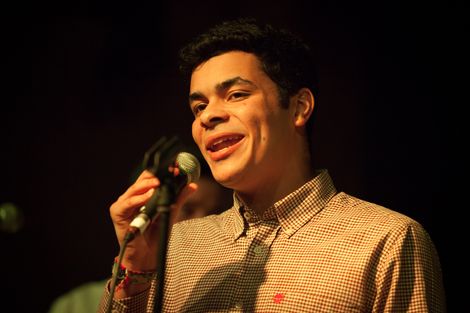 A raft of Liverpool’s new urban pop artists take to a packed Elevator Bar, Getintothis’ Laurence Cheeseman finds a scene on the up.

There’s been much bubbling in Liverpool’s emerging urban pop scene – and the opening ILuvLive Liverpool event inside a rammed Elevator bar showed why.
A strong cast of Merseyside’s emerging artists, from the crisp soulful pop of industry-eyed Ady Suleiman, to the stripped back pop foxyness of Getintothis tip Taylor Fowlis through to MiC Lowry‘s honed street-pop vocals and the charismatic philosophical balladry provided by the E-laborators‘ Merki, there’s much to champion of this developing scene.
For a cold, damp March evening the temperatures were high early doors as one half of Liverpool duo, E-laborators, Merki started the ball rolling.
His set of piano-rap ballads about poverty, hope and the hype machine provided a mellow opening to proceedings with Real Life proving the highlight. The calibre of the Liverpool talent on show was backed up by former GIT Award nominee, Miss Stylie‘s mini-epic 60 second rap battle ensuring a slot at the next ILuvLive event.

Vocal R’n’B group, MiC Lowry were given night’s biggest response – as a noticeable increase in the amount of teen girls down the front when Johann Green introduced them.
With their distinctly 90s vibe – think Boyz II Men on the Fresh Prince of Bel-Air Christmas special, replete with acoustic backing – MiC Lowry their well-honed pop provided a glimpse of an act to keep an eye on, yet they could do with adding a bit of diversity to the mix to ensure they maintain interest.
Hotly-tipped vocalist Taylor Fowlis du jour brand of retro, jazzy soul, has brought her recent rotation on BBC 1Xtra on TS7‘s house-garage track Heartlight – which is given an excellent acoustic transformation here.
Her remarkable cover of Yesterday received a (predictably) rapturous response, adding rhythm to the Fab Four’s timeless melody – her fantastic stage presence certainly didn’t hurt either. At the risk of repeating ourselves – Fowlis is another one to watch.
Closing the night was the stand-out act, Ady Suleiman, who, while continuing the retro soul vibe; albeit with a refreshingly reggae-esque twist, added something of a real unique sense of occasion.
Ady also provided some relief from the evenings professionalism performing unfinished sketches of songs, and was certainly better for it. Tonight provided a snapshot into Liverpool’s pop future, it’s looking brighter than ever.