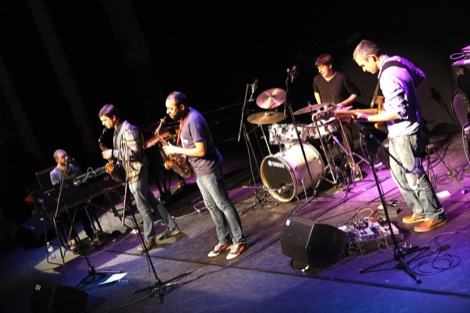 Led Bib are a London based avant jazz band, who over the course of five albums and one Mercury Prize nomination (for 2009’s Sensible Shoes) have pretty much created their own unique space on the UK music scene.
Playing at the Capstone Theatre as part of the first Liverpool International Jazz Festival, the band bring something special that is often absent from the more traditionally focused jazz acts that play, or are based in the city.
Across two lengthy sets (no formal support acts, although local prog-pop adventurers Gorp played in the theatre cafe afterwards), the band played a mixture of back catalogue and new tracks, demonstrating why they’re held in such high international regard.
We’re no jazz aficionado; knowledge of the genre barely stretches beyond Sun Ra, Don Cherry, Art Ensemble of Chicago, and On The Corner era Miles Davis, so it’d be difficult to comment on the Londoner’s influences or direction, however, we loved Led Bib‘s approach – precisely because they infuse their music with the adventure and creativity present in all those mentioned.
It’s not just that each song is perfectly complex, coherent, and rhythmically intricate, but each member takes an approach to playing their instrument that filled us with a real sense of witnessing something rare.
Keyboardist Tony McLaren, for example, firstly distinguished himself by being the only musician we’ve ever heard to get a decent sound from a Jen SX 1000 synthetone, but he also underpins much of the musical mood with his effected Rhodes and grand piano playing. 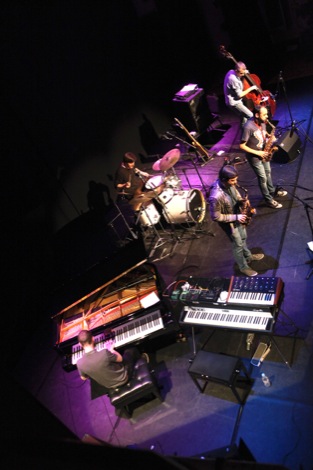 Leb Bib at the Capstone Theatre for Liverpool International Jazz Festival
The two alto sax players (Pete Grogan and Chris Williams), are each accomplished musicians of course, presenting spidery winding solos, but they really come into their own with interlocking sections that recalls Terry Riley at his psychedelically glorious best.
Drummer Mark Holub, nominally the band leader, and fresh off the plane from Vienna, is affable and his infectious enthusiasm is evident in his playful approach to the set.
Bassist Liran Donin was particularly impressive and has developed a range of idiosyncratic playing styles that show how just as important mechanical effort is as composition.
However, before you have visions of some mid-70s Louis Balfour jazz club horror, let us stop you there, he’s definitely more Holger Czukay than Jaco Pastorius.
Indeed, we hesitated to use the jazz descriptor, not simply because of the (negative) connotations it has in the pop/rock world, but for us, Led Bib are a great example of how kosmische music has developed and evolved in strange ways since the 1970’s; a band that are much closer to the spirit and intent of, say, Faust or Embryo, than anything encountered on Jools Holland.