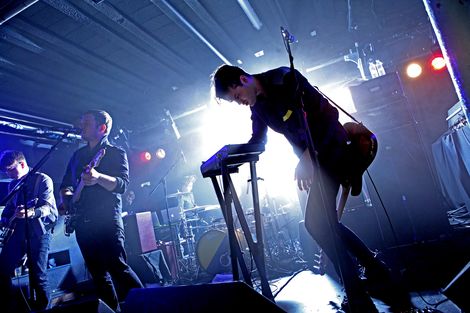 Everything Everything dazzle with their polymath structures and precision pop, Getintothis’ Stephanie Heneghan ventures upstairs to the basement. Or something.

It occurred to us the other day that we’ve always described the smaller room in the O2 Academy as ‘the basement’ despite the fact you have to walk up two flights of stairs to get to it.
A small insight into our level of intelligence there. Anyway, we’ve become extremely familiar with the basement recently and it’s fast becoming our favourite local venue – it’s more intimate than the larger space upstairs (gonna call that the attic from now on, just to keep things balanced), the sound is ace wherever you stand, it’s easier to get served at the bar and those little gaps in the wall near the back means you can have a proper good geg at the band and feel a bit VIPish (we’re never VIP).
Our most recent visit was to see Everything Everything, which was hotly-anticipated not just by ourselves, but by everyone one in Liverpool it appeared.
The place was chokablock, we couldn’t even get to our favourite spec, that’ll teach us to arrive earlier. Never undeterred, we clamoured onto the sofas at the back where we could see the whole audience bathed in blue lights (Instagrammed the shit out of that, obviously).
With a set list that blended the old album with the new, they had those present eating out of the palm of their collective hands (IDIOM ALERT).
Most recent single Kemosabe was up early doors, with Photoshop Handsome and Suffragette Suffragette providing the most single along action of the night.
The Peaks showed off their falsetto vocal, heavy basslines pounded throughout and there were strobes. STROBES! On a Sunday.
They’re awfully polite lads too, thanking the crowd for coming in their droves but we doubt it was a hardship for anyone who turned up.
Then of course, the old encore pantomime where the band leave the stage and we all stand there waiting for them to come back on and play the glaring omissions from the night thus far… apart from the hapless few who got confused and left (ha, fooled you!).
And come back on they did, with MY KZ, UR BF sounding just as fresh three years down the line.
They’re playing Liverpool again soon as part of Liverpool Sound City. We’re definitely going back to see them.
Photography by Dave Munn.
Further reading on Getintothis
Getintothis review Everything Everything, Delphic and Egyptian Hip Hop at O2 Academy.
Getintothis reviews Everything Everything‘s debut album Man Alive.