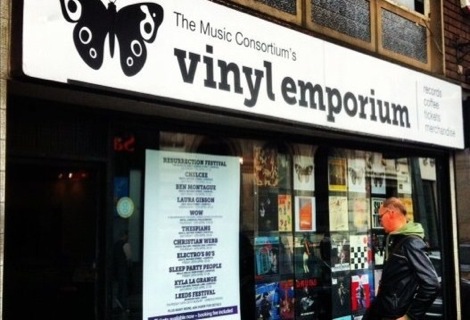 Iconic Liverpool independent record shop Hairy Records, recently renamed The Vinyl Emporium has announced its closure.
Liverpool based music promoters The Music Consortium announced the sad news on their website over the weekend.
Owner and founder of The Music Consortium, Spike Beecham, reopened and rebranded Hairy Records on Bold Street in February 2012.
The shop, one of the oldest record shops in the country, has been a mecca for record fans for decades and it now leaves just Probe Records and 3 Beat Records as the only independent Liverpool city centre based record stores.
Notable fans of Hairy’s included Dave McCabe and Noel Gallagher while film director Quentin Tarantino fell in love with the shop when he visited Liverpool in September 2007, saying: “I found this great little record shop in Liverpool, Hairy Records. There’s one record I’ve been hunting for worldwide for years, and they had it. I was on fire.”
The sad news comes just weeks before Record Store Day.
A statement on the shops’ official website, read: ‘As many of you are aware, Hairy Records was a haven for vinyl junkies in Liverpool and all around the world. We at The Vinyl Emporium were happy to keep that tradition going and loved every minute that we did just that. However the truth is, even though we were doing alright financially, circumstances concerning the property were beyond our control. This meant that we had to make the difficult decision of quitting whilst we were ahead.
‘The closing of any independent store is a sad day and a reminder of just how important it is to keep supporting them. When you believe the records on your shelves have their own unique tale to tell – not just about the music contained on it but the story of how it got there in the first place – then hopefully you will understand what an honour it has been to take on the legacy of one of the oldest record stores in the country. We haven’t made a final decision on what we will do over the coming months, but when we do we will let you know. Thank you.‘
Music lover, Jane Weller, echoed the sentiments of many, when posting this message on the Vinyl Emporium’s facebook page: ‘This is very sad news especially with World Record Store Day around the corner. I shopped here when it was Hairy Records and Vinyl Emporium found some great records and a warm welcome every time. Jesus even DJ Shadow dug here when he was in town! A Liverpool institution gone but will never be forgotten.‘
Further reading on Getintothis
Getintothis on the death of the indie record shop.
Record Store Day in Liverpool – Wolstenholme Creative Space, Game Theory and more.
Getintothis on Record Store Day
Getintothis on Probe Records.