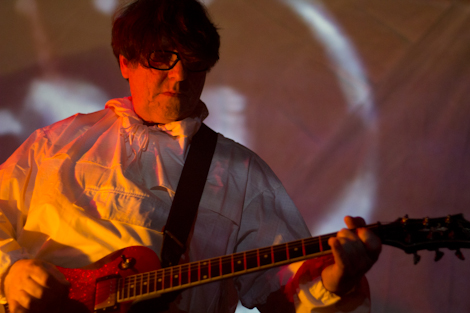 Will Sergeant and his spacerock cosmonauts deliver cyclonic wonder for the senses at the Kazimier, Getintothis’ Jamie Bowman submerges himself in the sonic void.

It has been a good few weeks for fans of 80s alternative guitar heroes.
Johnny Marr returned to Liverpool doing his solo thing and next month sees Terry Bickers reattach himself to the moorings with the reformed House of Love.
First up though is Poltergeist, the new interplanetary rhythmic juggernaut of Will Sergeant; one of the city’s favourite sons and the man who turned Echo and the Bunnymen into such a glorious force of nature.
There was always something of the mad professor about Sergeant’s on stage demeanor so it’s fitting that he and his band mates take to the Kazimier stage in all white, resembling the hairy Arctic outcasts of John Carpenter‘s The Thing.
An extra thrill for Bunnymen followers comes in the form of Les Pattinson, the band’s erstwhile original bassist, back in the fold after 15 years away and still playing his iconic blue Fender Jazz bass.
A motorik groove starts up courtesy of former Black Velvets drummer Nick Kilroe and we’re off on a kaleidoscopic and hallucinatory trip
through down the ley lines of 70s space rock.
Opener Dem Bones sets the tone as Sergeant weaves his trademark chiming riffs over Pattinson’s solid groove. The rhythmic section are tight and taught, recalling the crystal days when Les and Pete de Freitas spiralled into the ether.
Crucial to the whole glorious experience are Sergeant‘s cyclonic visuals as a huge white backdrop displays retro images ranging from racing cars careering around Le Mans to Peter Cook dressed as a jester.
The packed out crowd are mesmerized during a one hour blitz of the new album Your Mind Is A Box (Let Us Fill it With Wonder) with titles like
Dreamers Dreams of Spectrums and The Book of Pleasures hinting at the sky scraping sound within.
If there’s one quibble lurking at the back of this Bunnymen fan’s mind it is the regret that these are tunes that Ian McCullouch wouldn’t touch with a barge pole. Happy to let his band’s legacy drift into middle age it’s unbearably tantalizing to speculate on how so many of these soaring riffs would sound with a Mac croon in between.
But perhaps Duke McCool’s loss is our gain. Poltergeist don’t just go bump in the night.
They make a fantastic noise, full of the glacial splendour that the Bunnymen once specialised in and for now that’s enough.


Pictures by Getintothis’ Matt Owen
Further reading on Getintothis
Poltergiest: Your Mind Is A Box (Let Us Fill It With Wonder)
Getintothis talks to Will Sergeant on his new record and his love affair with psych music.
Getintothis reviews the Liverpool International Festival of Psychedelia featuring The Time And Space Machine, Dead Skeletons, Wolf People and more at Camp and Furnace.
Getintothis‘ Liverpool International Festival of Psychedelia – picture gallery.
Echo and the Bunnymen review from O2 Academy, Liverpool 2012
Getintothis reviews Echo and the Bunnymen live at the ECHO Arena performing Ocean Rain.