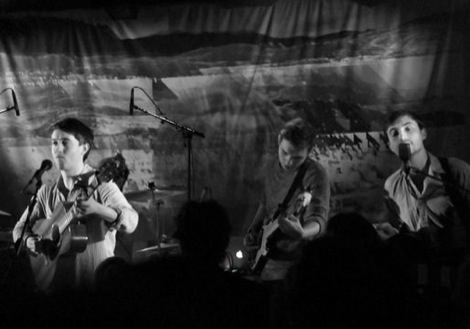 Villagers’ Conor O’Brien delivers a tour de force of song-writing intensity in Manchester, Getintothis’ Alan O’Hare hangs on to every drop of noise, melody and confusion.

Villagers live are an intense proposition.
Noise, confusion and melody drip from every note the five-piece make.
Sure, there are more tender moments when main man Conor O’Brien goes it alone (we’ll get to that soon), but most of time they are just a Radiohead outro away from a wig out.
The songs are fantastic. The rhythms are as urgent as an alcoholic before opening time and this is a band who builds from the drums up. They get you moving, they get you thinking and they, well, just get you.
Know what we mean? Of course you do. Villagers are living proof that great music hits you where it hurts. Bass lines throb, electric guitars scream and shout and you can’t take your eyes off the singer.
O’Brien is something else. He spits vowels like Elvis Costello, writes couplets like Leonard Cohen and delivers like Bob Dylan. There’s nobody to touch him as a band leader in 2013.
And God bless him, he leads the band through EVERY song from new album, {Awayland}.
The electro folk of the record is a step on from his Mercury-nominated debut, but most of the ingredients remain the same: The Bell‘s twitchy rhythms, the dramatic landscapes that inhabit Earthly Pleasure and lapping of the electronic shore of The Waves.
Nothing Arrived takes REM‘s Electrolite and finds its Celtic heart, before Rhythm Composer (and boy is that an apt title) makes you think how John Lennon would have sounded with a laptop. The tunes are great.
The sold-out crowd at Manchester’s Gorilla (think Static Gallery) stay with the Irishmen through the new stuff – most even know the words already – but they treat the songs from first record, Becoming A Jackal, like long lost friends.
The Pact, Home and Set The Tigers Free are big highlights. But it’s when the diminutive O’Brien takes centre stage with his little acoustic guitar that you can hear the gasp of collective breaths: That Day, The Meaning Of The Ritual and My Lighthouse are jaw-dropping in their eye-widening intensity.
O’Brien believes every word he’s singing – and therein lays the rub. The true measure of greatness is when you can be yourself and make people think that it’s all part of the show.
“So before you take this song as truth, you should wonder what I’m taking from you, how I benefit from you being here, lending me your ears, while I’m selling you my fears,” he sings in melodic narrative, Becoming A Jackal.
‘Selling you my fears,‘ – long may he continue.