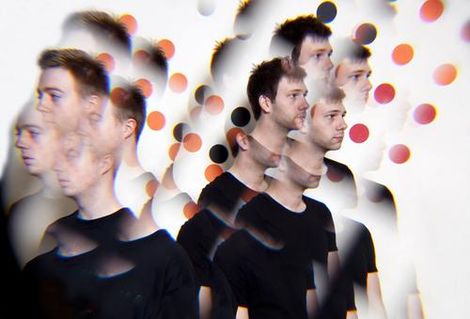 Two years is a long time. It’s enough to have turned London duo Mount Kimbie into something of an enigma.
Their 2010 debut Crooks & Lovers is already a landmark release in the context of UK electronic music, with singles Carbonated and Before I Move Off becoming two of the most iconic tracks of the last decade.
New track Made To Stray finally dropped alongside an album announcement last month, prompting a whirlwind of hype and acclaim both sides of the Atlantic as we all remembered why we loved these guys in the first place.
Next month, Liverpool Sound City will host them for only their second Liverpool appearance. We caught up with one half of the duo Dom Maker for his thoughts on this, the new album and their upcoming US tour.
Getintothis: Hi Dom! What have you been upto today?
Dom Maker: We are right in the middle of two days of rehearsals at the moment. We’re just sat in a café area of a rehearsal space in.
Getintothis: So you’re coming up here next month for Sound City. Have you heard much about the festival?
Dom Maker: Not really actually. We know Darkstar are playing, and of course Enter Shikari (laughs).
Getintothis: Since your debut in 2010, you have kept pretty quiet in terms of releases and remixes, a bit of an anomaly when it comes to the rapid fire UK electronic music scene. Was this a conscious decision, or have you been just keeping your head down, getting on with other things?
Dom Maker: Well it’s worked out quite nicely really. The main reason we’ve been away so long is that we’ve been touring the last album seriously hard for the last two and a half years.
So, we’ve just been out of the loop naturally. Having said that, I’m quite happy that it’s worked out like this. We certainly could have released something between now and the last album, but we felt like we had said everything we needed to with Crooks & Lovers.
I mean it’s quite a small pallet of sounds. It felt good to have a bit of time away and reflect on stuff, let new influences trickle into what we’re doing.
Getintothis: I know what you mean. Three years goes by so quickly now though doesn’t it – especially in electronic music.
Dom Maker: Yeah exactly. Its weird really, we didn’t really notice it until we came back and journalists like yourself were like ‘2 years guys, really?!’
Getintothis: On your press release for Made To Stray you said, “Two years is a long time. Tastes change, what you want out of your life changes, and so on. Naturally, how we want to sound has changed too”. How do you think your tastes, or even your listeners tastes have changed in the last two years?
Dom Maker: To be honest, due to this bubble we’ve been in we’ve listened to quite a small amount of new music.
I think what’s happened with this new record is that, because we’ve had a bit more backing behind us with the Warp guys being on board (Mount Kimbie signed to Warp Records last Summer), its given us the opportunity to use equipment and use spaces that we wouldn’t usually have had access to.
So whereas before with Crooks & Lovers we were solely using Fruity-Loops and sampling, things like that, with this one we’ve had the chance to step into live rehearsal rooms and live studios with live musicians.
One guy in particular called Andy Ramsey (drummer from Stereolab) has been fantastic.
He has a studio about five minutes walk from where we’re based, and it has a vast collection of vintage drum machines and harmoniums that he’s acquired over the last 30 years. And he just let us run riot in there, playing stuff we’ve never played before and generating sounds that we were really excited about.
This ultimately kick-started a lot of the ideas for this new album. Having said that, we were very cautious about moving too far away from who we are, so this record still feels very much like a Mount Kimbie record.

Getintothis: So will there be live instruments on the new record then?
Dom Maker: Yes there will be. We layered a lot of live drums on top of some fills and stuff. The main thing for us though was that we bought a Dave Smith Tempest drum machine (uses six analogue synthesis voices), and that really became the heart of the new album. Everything across the new album feels a bit more analogue, with a much broader pallet of sounds.
Getintothis: Sure. I suppose that last album was quite sparse in texture, staying away from that build-and-release song structure in favour of a more constant, steady stream of ideas. Is this something that you have carried through to the new recordings?
Dom Maker: Absolutely. I think a lot of what happened structurally with our records is because we don’t want to necessarily overplay ideas.
We just want the idea to be in completion and run its course, and then either evolve it into something else or just stop it totally.
For example, there is a track on the new record where we have a two-minute build up of an analogue arpeggio, and then a live jam with some synth, bass guitar, live drums and keys for literally just thirty seconds – and then it stops.
And a lot of people who have heard it comment saying it’s a little bizarre, but to us, we are presenting this idea and then moving on before we bore people with it.
Getintothis: Yeah totally. I think there is always a danger with electronic music of ‘blowing your load’ so to speak, and some of the best songs are built on those moments of restraint.
Dom Maker: Definitely, and we have really tried to carry that approach over to the new record. For me, it’s a more challenging listen, in that it feels like a bit of a grower of an album.
Getintothis: In terms of this new instrumentation, is this something you are going to bring into your live shows? Will you be bringing in some more band members?
Dom Maker: Yes we will be. We’ve got a new a new drummer, who is a very close friend of ours. He also plays bass, keys and sings too, and his presence has really given me and Kai (Campos) the freedom to be much more expressive on stage, instead of worrying about timings and things like that.
In that respect, that’s the main change. The focus is still on me and Kai at the front of the stage. We’re still doing the same kind of thing we did before though.
Just taking the song, replicating it and then vamping it up for the live setting. It’s been really enjoyable rehearsing and working out how the hell we’re going to play these songs live.
Getintothis: You’ve got King Krule featuring on the new record. What made you want to get him involved?
Dom Maker: Its something about his voice that’s always been a step above other vocalists we’ve heard. We didn’t just want a conventional singer.
We we were really wary of producing a set of electronic songs with any singer over the top as if it was just a featuring album. We wanted someone who could contribute as much as they could vocally as they could in terms of ideas, almost as if they were part of the band, and Archie (King Krule) really was perfect for that.
From the moment he heard our new sounds, he really was on it and immersed himself in those two tracks he features on.
Getintothis: You’re about to start on a US tour with Holy Other and another band called Vinyl Millions. How do you find US crowds compare with UK ones?
Dom Maker: Yeah we’re really excited for that, and American crowds are great. I mean both US and UK crowds have their pros and cons.
But with the Americans, they just go wild with anything. They aren’t as inhibited, they just lose their minds. It feels like that whole country was built for touring, and we’ve been really surprised with how well our live shows have gone down over there. We’ve developed quite a good, solid fan base already and we just want to build on that, get the chance to speak to different people and expose our music to different crowds.

It’s difficult to wrap your head around the idea of all these live instruments on a Mount Kimbie record. The prospect is exciting though. When you consider what they achieved with just Fruity-Loops and their ‘limited pallet of sounds’ on Crooks, just imagine what they can do with a full fucking studio full of instruments.
Mount Kimbie play Liverpool Sound City on the Saturday at 1:30am at The Garage.