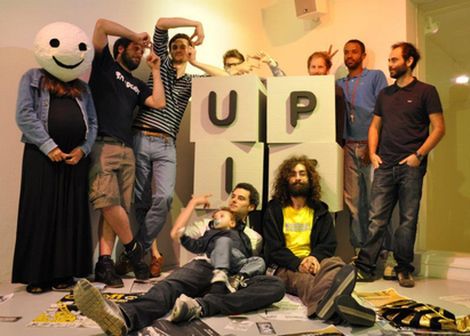 Precisely one decade has passed since five Roman upstarts decided to harness the kind-of-new power of the internet to transfer files as big as a few megabytes in a not inconceivable amount of time to share their own experiments in electronic music with each other and the world.
They created UpItUp Records as a creative outlet for their own music, and it has grown into one of Europe’s most respected electronica labels.
Their tenth year of ‘business’ is made all the more remarkable by the fact that all the music that they have released over the internet – that’s 55 releases and counting – has been absolutely free of charge.
As a celebration of flying in the face of the flapping music industry, UpItUp planned a tenth birthday party to end all birthday parties.
The first night was a Thursday unlike any other Liverpool has ever seen. Beyond the heavy snow in Spring obstacle, Ergo Phizmiz and The Wyrding Module topped a bill that brought nigh-on incomparable music and theatre to Liverpool’s Mello Mello.
Mercurial Rephlex Records veteran P.P. Roy supplied a fittingly fuzzy theme to the pre-theatre crowd, before The Wyrding Module took to the stage.
Sitting down behind his goat-skull adorned laptop in his long black hooded robe, Chris Gladwin looked like, and in a way sounded like, a one man Sunn O))).
Gladwin quickly immersed the audience in darkly meditative drone, with chest-crushingly intense, constantly morphing bass frequencies. Inside the cinematic, onyx dark drone-dub, many influences lie undeniably to the east.
His self-described “kosmische-doom-ragas” contain deeply spiritual reflections of Mongolian throat singing and ever circling melodies akin to electronic Tibetan singing bowls.
This preceded Ergo Phizmiz‘s Gargantua – a genuinely unique stage-show full of toilet humour, gigantic papier-mâché heads, sliced up gramophone recordings and disturbing religious imagery.
As impossible as it was to follow the spiralling, convoluted plot, the visual imagery, wordplay and music all made for an other worldly experience the likes of which only Phizmiz could conjure.
Bubblegum freak-pop from Liverpool’s Chiz Turnross and some knob twiddling from Deep Hedonia‘s Kepla served to level everyone out at the end of what was an intense first night of music and performance.
The Kazimier played host to the biggest event of the weekend, and all the performances were predictably top notch.
Liverpool’s own Captain Johnson played a stormer of a live-set packed full of acid stompers which set the tone for an incredible line-up of electronic music.
London’s Datassette and Blackpool’s VHS Head were seemingly born on the same bill, as their decidedly crunchy takes on electro and old school funk complemented each other remarkably well.
AGT Rave Crew served up a dancefloor destroying smorgasboard of raved up bassline and old school breakbeat before the night’s main attraction took to the stage.
In fact, Ceephax Acid Crew‘s myriad of real-life synth-porn hardware had already taken over much of the stage before the man himself took the controls.
With his seemingly endless jumper and shell-suit wardrobe, and penchant for Commodore 64 soundtracks, Ceephax is one of the more all-round entertaining artists on the electronic, breaking up his set of untouchable acid techno and old school electronica with hilarious outbursts such as, ‘This chord here, is actually known as the Laurence Olivier Chord. Not many people know that.”
By the close, the crowd are throwing themselves around the Kazimier with reckless abandon and are left shouting for more at the end.
The night finished with local favourites Tony Loco and Oddbwar spinning their own unique blend of dancefloor friendly juke, bassline and kitchen sink tunes.
While the Friday night was the bill with the biggest names, the final, Saturday night was the real birthday party, with the whole UpItUp stable – upwards of 20 artists – playing in Drop the Dumbells.
It was a remarkably elated atmosphere, which can only come from a group of people, who over their ten years of releasing music, have not sought to make a penny.
The music has always been at the heart of everything UpItUp have done, and as a result it has become so much more than that. It is a family, and this was perfectly evident as all the members pulled together to help those who were somewhat worse-for-wear at the end of, what was for some, a heavy weekend.
Every single act was a highlight, but especially worth a mention was Tracky Birthday‘s 8-bit comedy rave-rap, Pierlo‘s chunky, neck breaking electro, and Liverpool’s own Big Effigy‘s bonce-bouncing melodic glitch.
The indubitable star of the night, however, was Rome’s Buromaschinen. Despite making music since 1996, he only recently equipped himself with a milieu of synths and sequencers, customised the flight case for a sniper-rifle so he had a way of transporting them, and flew over to Liverpool for what was his first ever live performance.
His gloriously textured sound consists of cascading layers of arpeggiated bleeps. Euphoric, crunchy and swaying in equal measure.
After 14 sets, the final party of the decade drew to a reluctant close, but it was clear that, 10 years on, the label was only getting stronger.
The whole weekend was a party which was as much a reward, as it was a testament to, 10 years of disregarding commercial interests for music and friendship, and society could do worse than to at least have a look at the pages in UpItUp‘s book, even if it won’t take one out of it.