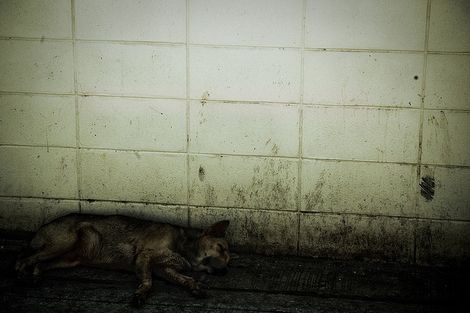 Owls* return with first new material in aeons – a filthy louche groove to get your sweat on.

‘I swear he thinks he’s invisible, his ball sack must be considerable,’ is up there with the lines of 2013.
And it’s indicative of the kind of lascivious lumbering rock and roll drool penned by Owls* on their comeback Dogs.
A half-paced lollop through the scum-drenched back alleys of debaucheria – a nowhere land populated by the remnants of a depraved society crawling down the sewers to wash clean their scum-soaked souls; the kind of swaggering trinket usually peddled by the Bad Seeds.
Dogs is the double A-side with Gravity Sweetheart out on Witchfinder Records on Friday May 17 and will be given a special airing at Milk:Presents’ LSD showcase night alongside Broken Men, Clang Boom Steam and Where We’re West at Milk on May 17.