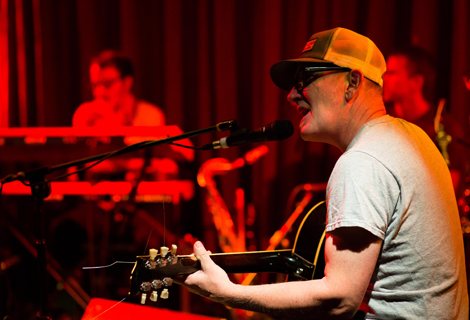 Lambchop commanded a hushed and reverential crowd at The Kazimier, Getintothis’ Will Fitzpatrick feasted on a gig with all the trimmings.

We have eclectic tastes nowadays. Or so we flatter ourselves, in any case.
It’s no longer quite so satisfactory to validate our identities by pledging allegiance to ghettoised scenes or subcultures.
When asked what music we’re into, we commonly reply “oh, a bit of everything,” whilst glibly forgetting how much of that wide sphere we actually find to be trite, tedious or turd.
…and let’s be honest here, it’s the fear of any combination of those three terrible t’s that causes our hearts to sink ever so slightly at the sight of a man walking onstage alone, clutching an acoustic guitar.
Tonight’s prime example, Liverpool troubadour Robert Vincent. He is the type of songwriter that appeals to those who profess to like a bit of everything, with the unwitting subtext ‘without specifically liking anything all that much’.
He’s a little bit country, he’s a little bit rock’n’roll, he’s a little bit folk when the mood takes him, but despite some nimble fingers and an enviably bruised croon, it’s hard to see anyone feeling particularly fascinated by the forgettable yet pleasant Light Of The Stars.
What he isn’t is interesting. So many downbeat personal songs! So many vowels strangled into incomprehensibility by faux-American enunciation – note that: not, say, Tennessean or Texan. Just generic ‘American’.
Where’s the empathetic sense of humour? The desire to tell a story? We need more than merely pretty songs with a broad appeal, for yonder lies James Morrison territory.
This is all starting to look rather damning, so just to be clear, Robert Vincent is not bad. But not quite ‘not bad’ enough. Quick capsule review: Tryin’ Adams. 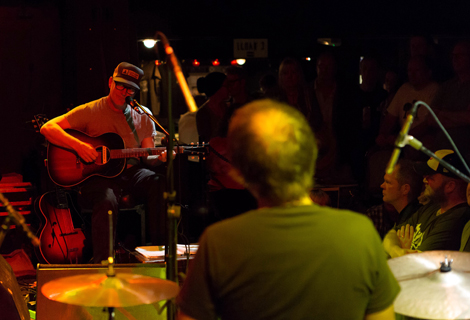 Lambchop’s set at The Kazimier was fantastic from every angle
Such troubles do not afflict Lambchop, for whom eclecticism amounts to another day at the office.
They’re a prize curio; nuggets of gold pulled from the stashes of country, soul and jazz, all ground up together to create rocks of purest Americana. And they’re so damn quiet with it too; there are moments in tonight’s set where the band rock so gently that you can hear the dull clink of ice being poured into tumblers at the bar.
Naturally they’re greeted with reverential silence: “I don’t know what the fuck they talk about,” sings Kurt Wagner on set opener If Not I’ll Just Die.
The entire room seems to nod solemnly in agreement. Who knows? Who cares?
Maybe it’s the warmth of the Nashville veteran’s creaky baritone, or the way his verbose wit comes wrapped up in layers of luscious, beautiful sound.
Perhaps it’s just the ripples of Tony Crow’s piano adding zing to the overall flavour. Whatever. The upshot is that the six-piece band are simply spellbinding. 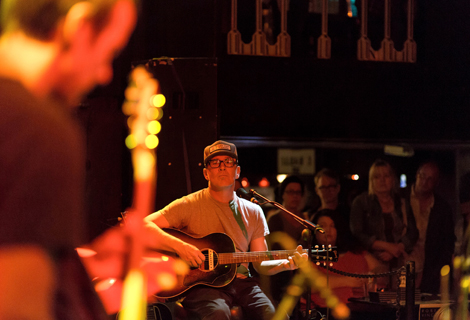 Kurt Wagner was very much in focus throughout Lambchop’s set at The Kazimier
As you might expect, song choices are largely drawn from latest opus Mr M, with swoonsome countrified strummers like The Good Life (Is Wasted) blowing prairie dust across the Kazimier stage before it’s completely overtaken by the sweet expanses of Nice Without Mercy.
The biggest cheers, predictably, are reserved for older favourites like About My Lighter and, indeed, the subtle majesty of Up With People, originally found in more voluminous form on their 2000 album Nixon.
In between we’re treated to snigger-worthy smut from Crow, as the genial Wagner beams proudly and gratefully throughout.
There are plenty of acts abusing American roots music in this day and age, adopting tried’n’tested tropes while serving up distastefully large portions of blandness.
It’s incredible that Lambchop should head for the same sources, and yet time again they emerge sounding like no-one else but their own distinct, inspirational, wonderful selves.