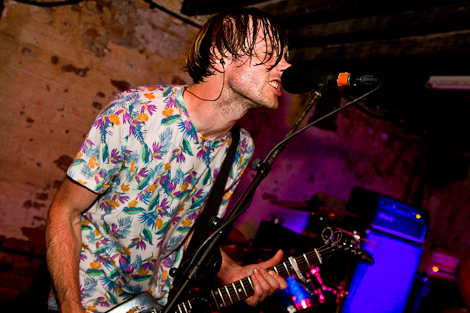 Watching live music in the summer is sometimes a struggle.
Sunburn when you’re outdoors, stifling heat when you’re inside, it isn’t always fun.
Attending the sauna of The Shipping Forecast‘s downstairs bar, The Hold, was always going to be a challenge in this weather.
First up was Tigercub, the post-grunge three-piece from Brighton. Sounding like Sonic Youth playing Bay City Rollers songs, the band’s set was magnificently layered in feedback and loud choruses. They certainly deserved a bigger audience.
Next was the heavier Max Raptor, with singer Wil Ray stepping off the stage to literally get in people’s faces, singing inches away from the crowd and bobbing back and forth to get a reaction from them.
The Midlands-based band’s new single Breakers was a highlight of what seemed a fairly repetitive ‘alt-rock by numbers’ set, but Ray energised the crowd to a large degree.
His stage antics may have been a shrewd distraction from the actual music though, which at times descended into a pretty poor sludgefest of noise. Still, the crowd seemed to enjoy it. 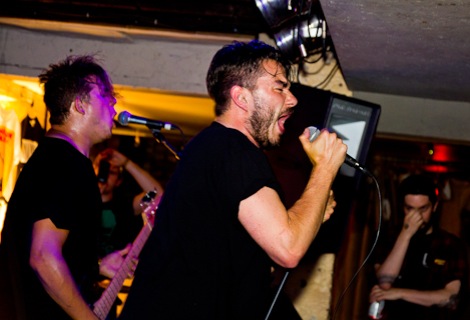 Max Raptor tear their lungs out at the Ship
By the time Dinosaur Pile-Up took to the stage, the place had filled up and everyone was sweating. With mercifully less crowd interaction, the Yorkshire band tore energetically through their set, playing many songs from their new album Nature Nurture.
They’re a strange band in many ways, having released their underrated debut album in 2010 and failing to really live up to its promise. Three years later their ‘grunge revival’ sound has changed only slightly, but just enough to maybe make a bigger name for themselves.
Their early singles My Rock ‘n’ Roll and Mona Lisa saw singer Matt Bigland, the creative force behind the band, belting out Cobain/Grohl-influenced vocals that garnered a great response from their fans.
But it was when the band strayed away from their heavier stuff to a more melodic, east coast sound that they really electrified the crowd. 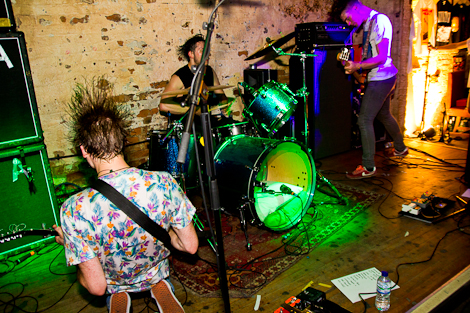 Dinosaur Pile-Up’s weekend roast
New songs Arizona Waiting and Lip Hook Kiss, with their more tuneful harmonies alongside big meaty riffs, really set this band apart from most other British rock bands around at the moment.
It’s sometimes easy to forget that there are only three of them onstage, as the crunching power chords create such a wall of sound.
The crowd grew more enthusiastic as the gig went along, despite the roasting temperature of the evening. As we say, sometimes live music in the heat of summer isn’t fun. Tonight was, though.