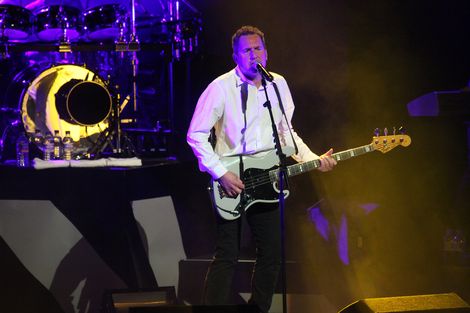 OMD showcase their three-part career evolution with a towering display on hometurf, Getintothis’ Michael Booth reflects on an epic display which tested the very mettle of the Empire Theatre.

OMD, the band that put the Wirral Peninsula on the musical map (apologies for a shameless Liverpudlian dig) rounded off the home leg of their English Electric tour by playing to a capacity Empire Theatre in a gig which generated a surprising amount of energy given the average age of the audience.
Indeed the stanchions of the rowdy upper tier had their mettle tested during the course of the night in a celebration which highlighted the huge well of affection that remains for the band after all these years.
Having been defunct during the height of the Britpop era when the idea of a band sans guitar was tantamount to heresy, it’s clear that OMD are now relishing their brand of music being granted acceptance once again. Listening to their latest album, English Electric, Getintothis found ourselves at a loss as to why this music became so marginalised and frequently the subject of ridicule.
Such is the fickle nature of fashion. As Gary Numan found out, a charlatan can become a Godfather overnight if the vagaries of pop deign it to be.
OMD took over the reins from the support act of John Foxx & The Maths who kicked off the evening with a real muscular performance, keeping the expectant crowd simmering with choice cuts from their latest album, Evidence and also delving into John Foxx‘s Metamatic era work.
A master class in contemporary analogue electronica, in many ways not entirely divorced from OMD, but with a harsher, disconnected edge. 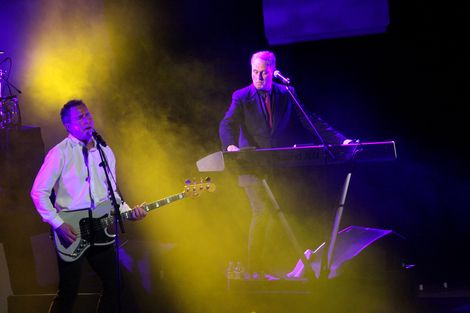 With the stage now set, OMD took flight with the timeless grace of Metroland, the showcase single from their new album and a wonderfully nostalgic nod to Kraftwerk and the passing of an age.
With its breezy Europe Endless style riff and open, optimistic melody it perfectly encapsulates so much of what OMD have strived for and excelled at throughout their career. And from this contemporary brilliance the band appeased the old guard by effortlessly stepping back 30 years and launching into their brooding sophomore single Messages to rapturous cheers and applause.
While OMD are very much a studio band they are by no means studio bound and the quality of their musicianship was evident from the outset. A certain degree of automation is inevitable when performing such texturally rich electronic music but the live element was very much to the fore, delivered with a truly seasoned level of showmanship.
It was heartening to see OMD together in their classic line-up, so along with the core duo of Andy McCluskey (vocals, bass) and Paul Humphries (vocals, keyboards), extended band members Martin Cooper (keyboards, saxophone) and Malcolm Holmes (percussion) completed the outfit.
Holmes is a hugely charismatic hairy biker style figure and the surrounding bank of skins sure took some punishment as he laid down the heartbeat of the set list like a true rock veteran.
Andy McCluskey must also be applauded for the sheer amount of vigour injected into his performance. In the early days of OMD he became (in)famous for his decidedly uncoordinated approach to dancing and swinging the ol’ bass around and we’d be lying if we said this had improved with age, but in fairness the ‘giddy schoolteacher on stage’ persona was always part of his appeal for the OMD faithful.
By contrast Humphries and Cooper are far more reserved figures, studiously colluding with their synths in Stockhausen style. When Cooper did occasionally reach for the saxophone, his performances were sensational.
OMD evolved through three very distinct musical phrases during their career and all were keenly represented as the set list continued.
The experimentalism of the band’s first four albums was best exemplified by the back to back combo of Joan of Arc and the strident Maid of Orleans.
As the waltz style beat thundered out in 6/8 time in accompaniment to the shrill synths there was a palpable feeling of ecstasy amongst the crowd. Arguably this was the highlight of the night and produced the headiest of crescendos.
Equally, the pure pop era was unashamedly celebrated with If You Leave, So In Love and the joyous Tesla Girls.
It was this phase of evolution which saw OMD flourish across the Atlantic, as film-maker and 80s icon John Hughes frequently named checked the band and included them in his movies.
These soundtracks now serve as a who’s who of the 80s alternative scene and there was a real passion to how these tracks were performed and received. OMD truly had a Midas touch when it came to writing fluid, confident pop songs with bittersweet words and aching melodies.
Had OMD played the game, ditched the pullovers and applied the requisite amount of lip-gloss their commercial trajectory could’ve been even higher but thankfully they left such excesses to Duran Duran. Their inner-Techies simply wouldn’t allow it. 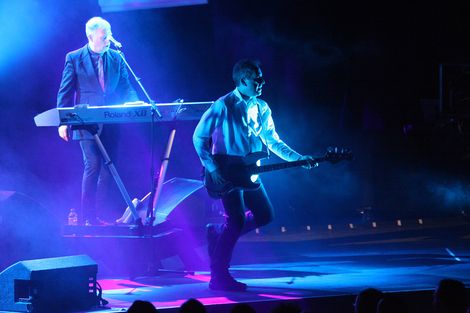 Finally we have the renaissance period OMD, the last two albums, History Of Modern and English Electric, both of which basked in critical acclaim and saw the band returning to their more experimental inclinations while at the same time retaining a pure pop element for the purpose of single releases.
Thus we were treated to warm, fuzzy electronica with OMD’s ode to Edward Hopper – Night Cafe counterbalanced by a confection of unashamed pop numbers in the form of current single Dresden and the infectious History Of Modern Part 1.
Elsewhere the experimental side was represented by tracks such as Our System which features some wonderfully haunting samples provided by NASA from the Voyager spacecraft as it left our solar system, and also the Karl Bartos/ Claudia Brucken collaboration Kissing The Machine. Many of the tracks were interspersed with brief passages of musique concrète, something OMD have frequently included on their albums to great effect.
Occasionally the retiring Paul Humphries took to the microphone and although he isn’t a natural front man, it was a poignant moment when he lent his delicate voice to the ethereal Souvenir complete with its choral backing track. If there was a time to hold the cigarette lighters aloft then this abstract ballad certainly provided it.
Appropriately the gig ended with a high BPM as OMD exploded into their quintessential single, the irrepressible Enola Gay, with Andy McCluskey hammering away on his tortured bass as if his life depended on it.
Like the electron of an atom, he was seemingly present everywhere at once on stage. The audience had been treated to nearly 20 tracks by this point and the band still managed to summon the energy for a cracking encore with the wistful Walking On The Milky Way before returning to the very dawn of their career with the fizzy debut single, Electricity.
It was an epic performance and the connection the band forged with the crowd was that special kind which only a home-turf gig can generate.
Plenty of light-hearted banter was forthcoming from McCluskey which went down well and there was also a special moment when he pointed out the seat he’d sat in as a teen when attending Kraftwerk‘s visit to the Empire in 1975.
It was evidently a moment of enchantment he’d carried with him all these years and we suspect for many in today’s audience the same will be true.
Pictures by Getintothis’ Dave Munn.
Further reading on Getintothis
Getintothis talks to OMD: We’re still trying to be the future and challenge ourselves.
OMD: Atomic Ranch.
John Foxx and the Maths interview: We’re going to assault Liverpool with light and sound.
John Foxx and the Maths: Stanley Theatre, Liverpool.