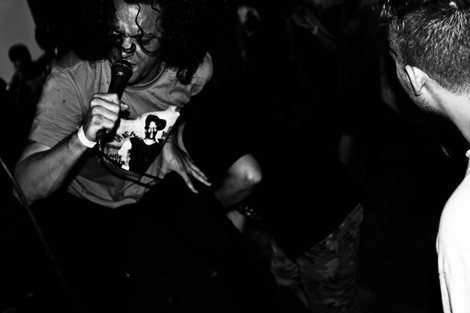 Hardcore thrash and a billowing heatwave hit Blade Factory as Trash Talk whip up a storm, Getintothis’ Laurie Cheeseman experiences everything pushed to the extreme.

Given Liverpool’s reputation, Stateside at least, for being a cold wet city on the edge of the Atlantic Ocean, our American cousins in tonight’s main attraction are perplexed by our recent run of excellent weather. And what a perfect day for a hardcore punk freakout it is.
Given the sweltering July heat, it’s perfectly understandable that Merseyside metal fixtures Iron Witch‘s spectacularly bearded (and eerily back-lit bassist) was topless even before they began their doomy delta-metal offensive.
With hindsight, the fact lead pig-squealer Chris Fane was in the pit before anyone had picked up in an instrument should have been warning enough of just how gloriously intense their cymbal-heavy drumming, all-out-assault riffage and hollering was going to be. All of which created a wonderful tension which was furthered by the glorious weather and the Bloc Party festivities next door at Camp and Furnace, as it spilt out into a glorious heady funk. 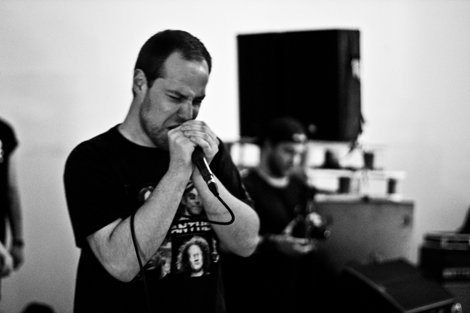 Add to this wonderful mix was the fact that, where most bands would go for your common-or-garden breakdown, Iron Witch switch it all up and go full-on thrash resulting in a gloriously insane recipe for success. 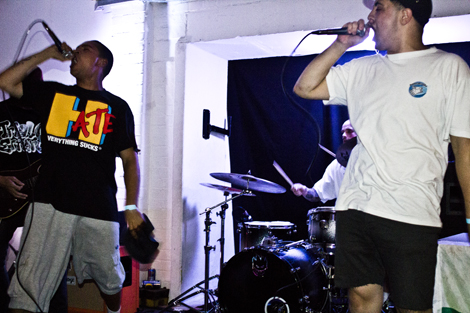 Following such a stellar support act, Astroid Boys had a lot to live up to, and things start out good when the hype-men promptly work the pit into a whipped up frenzy. Sadly, however, they never deliver the goods. When will people learn that the hypeman-and-hardcore combo has only ever been done properly by Fugazi?
Add into the equation a curious re-imagining of Limp Bizkit, and you have to ask yourself, is the world really ready for that? The answer is unequivocally: no. 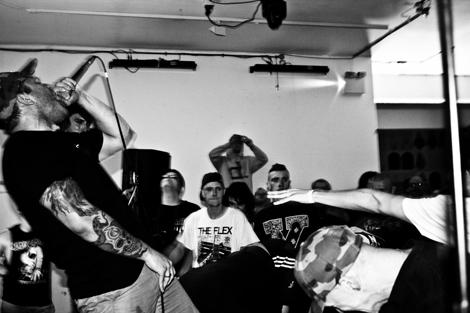 Alpha and Omega, a rather excellent ensemble, blend thrash and hardcore influences without turning into mega-corny thrashcore.
Despite an absolutely epic intro ratcheting up the suspense, there’s perhaps too much going on stage to discern who is making what noise – let alone what is actually being said.
Still, they have to be one of the most frightening prospects live on the planet. More terrifying than, say, Iceage – and they littered the ground with broken spectacles and ripped clothes at their last appearance at the Shipping Forecast, so it’s not all bad.
Short but flipping sweet is Trash Talk‘s modus operandi, and boy does it thrill. The whole shebang could have dropped straight out of L.A.’s 80s underground; it’s far too rare these days to go somewhere where there is no barrier between the band and audience. 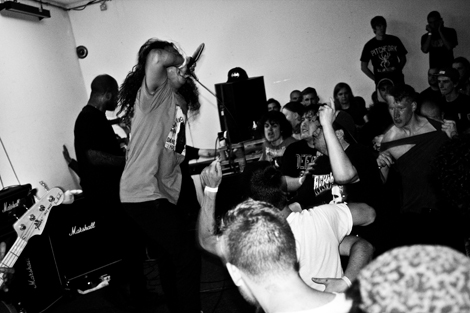 Awake and F.E.B.N. are the undisputed highlights; people everywhere, limbs flailing and one chap with the unfortunate tendency to faint several times per song only add to the pandemonium.
Even slow tracks like Hash Wednesday can’t slow the momentum – well, slow is rather relative for a band where most songs come in under 60 seconds.
With a pit where people come out looking like a drowned rat what could go wrong? Well, when the portly skins decide a t-shirt amnesty is in order and decide to rough it up a bit too much it really hits the fan like it’s 1982. Sort of the reason Ian MacKaye carried wads of $5 bills to give to ruffians as he turfed them out.
Still, it was totally worth being stuck in a sweatbox on one of Liverpool’s few sweltering summer days for this: punk as it should always be – live, loud, fast and most of all unashamed fun.