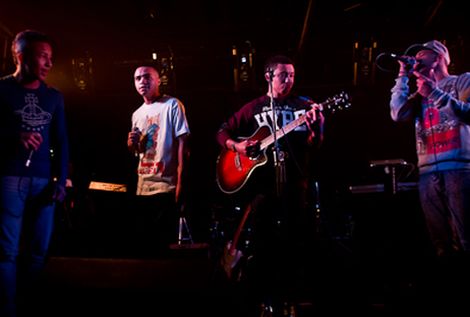 MiC LOWRY are to play an intimate showcase gig tonight at Leaf Tea Shop.
The Liverpool soul-pop band have been bubbling under the radar for sometime now and will play this hastily-arranged showcase tonight at Leaf on Bold Street.
The teenagers – Ben Sharples, Kaine Ofoeme, Akia Jones, Delleile Ankrah and Michael Welch – who formed through Positive Impact‘s community production company have been under the guidance Esco Williams and despite having released no material have accrued a huge fan base selling out gigs throughout the region.
They featured at the GIT Award 2012 launch and more recently were on the bill at Esco’s O2 Academy headline show while also featuring during the Liverpool International Music Festival.
Special guests include Normske – aka Janiece Myers.
Find out what the fuss is tonight at Leaf, for more details visit here.