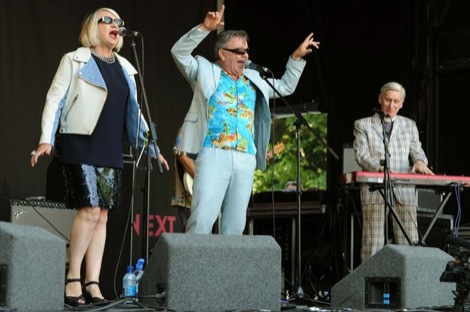 Deaf School are part of Liverpool’s fabric as much as the fab four, ahead of their East Village Arts Club date, Getintothis’ Alan O’Hare salutes a band reborn at Sefton Park.

“In the whole history of Liverpool music two bands matter most, one is The Beatles and the other is Deaf School.” Paul Du Noyer said that. He should know.
If the tired old myth that states everyone who bought a Velvet Underground record went on to form a band can be considered a fact these days then the same can certainly be said of Deaf School.
In fact, it’s probably true. In a tangled history that includes links to Dexys, Madness, Elvis Costello, Derek Taylor and Eric’s, Deaf School have ploughed a furrow created by nobody but followed by most.
Getting together in the 70s, they arrived fully formed by the time of their first album (1976’s 2nd Honeymoon) and took on the world over three albums in three years.
That the world wasn’t listening didn’t stop them. As is proved by the age range of the crowd listening at Sefton Park for the inaugural Liverpool International Music Festival. Kids, teenagers, mums, dads and cool uncles in tight trousers and Deaf School T shirts bop along to classics like Taxi and the sublime What A Way To End It All like there’s no tomorrow.
There might not be with this band. And therein lies the rub to Deaf School’s greatness: there is no career path, marketing gimmicks or concessions to compromise. Just life on the wire and artists coming together to bend strings, blow saxophones and bash drums.
And what a glorious racket they make! Tempos speed up and slow down like a raver up the road at Creamfields, Ian Ritchie’s sax makes noises like it’s in the throws of passion or gasping for its final breath (sometimes both in the same song!) and guitarist Clive Hanger (real name: Langer, yes of Shipbuilding fame) makes his electric guitar sound like it was invented just yesterday.
The singers? They’re as fantastic as the names suggest: Bette Bright brings the top end and glamour (hitting more big notes than Debbie Harry does these days, for six times the ticket price), while front man Enrico Cadillac Jnr leads the sing-a-longs, sweats through his turquoise suit and carries on like Mick Jagger without trying.
They’re just cool. And, quite frankly, bring a much needed shot of credibility to the proceedings.
Recent Liverpool music film The City That Rocked The World may have missed them out. And you’ll never find a statue of Enrico Cadillac Jnr on Hope Street (though we should start a Facebook group today). But Deaf School are a quintessential part of this city’s cultural fabric and their rebirth continues to impress. Long may they reign.
Deaf School play Liverpool’s East Village Arts Club on Saturday October 19, for a full 2013 tour list visit here.