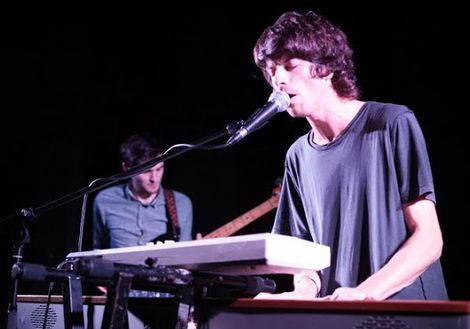 Euros Childs brought years of experience and a devoted following to Leaf. Getintothis’ Jamie Bowman was bowled over by the wealth of talent on show.

With the nights drawing in and the cost of energy bills soaring, thank goodness for promoters Harvest Sun whose bill for tonight’s gig provides a pleasing winter warmer to even the most cold hearted of musical misanthropes.
First up is Maghull maverick Laura J. Martin, whose extraordinary mix of flute, loops, melodica and mandolin soon wins over the early evening crowd.
Martin has certainly moved on from the weird beard folk of her debut LP The Hangman’s Tree, with the new songs taken from forthcoming record Dazzle Days displaying a focus to her eclecticism.
Live, it’s an often staggering watch, as she scuttles around the stage picking up instruments like a toddler let loose in the primary school music room. 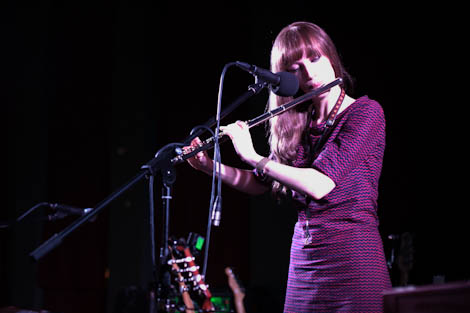 To mention Martin’s name alongside Kate Bush and Johanna Newsome could be seen as hype but there is an originality and uniqueness here that cannot help but recall the famously mysterious Wuthering Heights singer at her best.

At the very least it’s doubtful you’ll come across another flute wielding, piano playing, mandolin strumming, singer-songwriter any time soon.
After the originality of Ms. Martin, it seems rather a let down to see a bunch of scruffy, twenty something lads shuffle onto the stage but as former Coral guitarist Bill Ryder-Jones explains in graphic terms he is not feeling well so we’ll just have to put up with it. 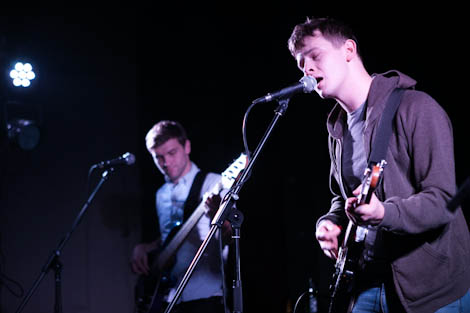 Thankfully Ryder-Jones’ pale demeanour complements the startling beauty of many of the fragile, delicate and moving songs taken from his A Bad Wind Blows In My Heart album.
Since leaving the Dreaming Of You hit-makers in 2008, Ryder-Jones has cut and impressively avant-garde figure, recording with the Liverpool Philharmonic Orchestra and composing soundtracks to imaginary films.
It all seems a long way from the days of Woy-Oy Boy and Skeleton Key, and to his credit, the 29-year-old’s latest career move is another neat sidestep.
It’s all incredibly sedate and as far removed from the raucousness of his former band as it could possibly be as the likes of Christina, That’s The Saddest Thing and Wild Swans reveal their hidden charms over fellow Coral graduate, Nick Power’s gorgeous keyboard drone.
Topped off by Ryder-Jones’ cracked husk of a voice, this atmospheric and beguiling set is as surprising as it is delightful. 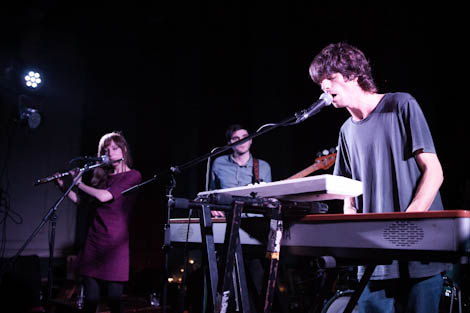 Many of tonight’s weeknight audience packed with discerning indie punters can well remember the days when Euros Childs’ former band, the much-missed Gorky’s Zygotic Mynci, could headline the Philharmonic Hall, but the inexorable passing of time should not detract from Childs’ hugely entertaining career post Gorky’s.
Releasing an album a year on his National Elf record label, Childs has followed his restless muse to become one of our more reliably eccentric singer songwriter, willing to discuss anything from Edwardian serial killers (the maddeningly catchy Brides In The Bath) to the sexual allure of equine enthusiasts (Horse Riding).
Standing behind his bank of keyboards, Childs is a bug eyed enthusiast, willing the punters on as he launches into a succession of gallomphing piano led boogies, which still manage to have enough of his former group’s wide-eyed psychedelic wonder and country rock tendancies to stop them from grating.
As the gibberish fun of Ooh La Oona and Tete a Tete show, Childs still knows his way around a great pop song and although he may not be performing at the top of the bill of any provincial theatres any time soon, we can rest safe in the knowledge one of British music’s great music eccentrics is alive, well and flourishing.