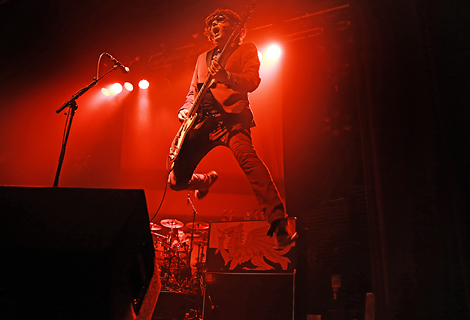 Manic Street Preachers have more to say and greater energy the older they get Getintothis’ Joseph Viney found them in fine fettle.

The Manic Street Preachers‘ career, like many rollercoaster football classics, can be deemed a game of two halves.
Since the disappearance of the talismanic, troubled Richey Edwards in February 1995, a very clear dividing line has been drawn between the two stages of their career. Gone are the feather boas, reckless and nihilistic lyricism and the militant aesthetic (an appearance on Tops Of The Pops in balaclavas gathered a record number of complaints) of their younger days.
In its place is a more considered, music-for-musicians approach that has seen their later work earn pride of place among the Edwards-infused records of the past. If it seems like Getintothis is patting The Manics on the head, saying “you’ve done *so* well“, as if talking to a particularly stupid parrot, then that isn’t the case at all.
Their set at Manchester’s Ritz on Friday night was confirmation of the old proverb that youth is wasted on the young. From the opening bends of Motorcycle Emptiness, its bittersweet lyrics capturing that essence of modern, urban detachment to an eye-watering tee (“under neon loneliness“) it’s plain to see that while they have nothing to prove, they still don’t give a fuck what people think.
And why should they? Even the most casual music fan in attendance tonight can’t help but be bowled over by the sheer weight of gold-plated tunes in their canon.
The night is yet young already we’ve been slapped about the face with the aforementioned opener, Your Love Alone Is Not Enough, (It’s Not War) Just The End Of Love and You Stole The Sun From My Heart. The Ritz’s famously bouncy floor is getting the workout of a lifetime already. 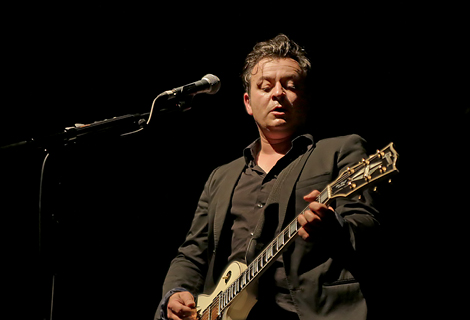 Manic Street Preachers at the Ritz, Manchester
New record Rewind The Film has been in receipt of stellar reviews and it gets a good airing tonight, a good quarter of a 25-song set being let over for the new ones.
The new songs show a flair for the dramatic, and in a parallel universe are being used as the soundtrack for a Ken Loach film somewhere; no doubt set in the north as a hard-bitten boxer and doorman is trapped in a loveless marriage to his own dog who works down the mines.
Ignore the cynic though, as Show Me The Wonder, Anthem For A Lost Cause and the new album’s titular tracks all hit the spot. As we discussed earlier, they may have skimmed off the surface anger and extroversion that defined their riotous beginnings, but deep at the heart of The Manics is a beguiling mix of anger and playfulness; anger towards those they deem not worthy and oppressive, playfulness and inclusivity in tune with those who suffer so or are deserving.
The best example of this lay in Nicky Wire (never a wallflower of course) and his condemnation of people like Michael Gove and his cabinet colleagues as “fucking idiots” not long before Bradfield hit the stage and serenaded us to solo snippets of Stone Roses’ Waterfall and Frankie Valli’s timeless Can’t Take My Eyes Off You.
That mix comes to the fore again in You Love Us. Its refrain of “you love us like a holocaust” was designed to shock and even now, the paucity of its feelings of offence are still enough to create a buzz. Sure, it’s playing to the gallery a bit, but if there’s one thing The Manics have never been, it’s insincere. They’ve picked their side and they’ve never wavered since.
Only one song is proffered in Richie’s name tonight; the oddly sexual Revol (“Stalin: bisexual epoch, Kruschev: self love in his mirrors, Brezhnev: married into group sex“).
There were plenty of others that could have been played to, and while you cannot underestimate Edwards’ role in the group even to this day, tonight was not the night for the abject horror and violent imagery his songs can invoke. 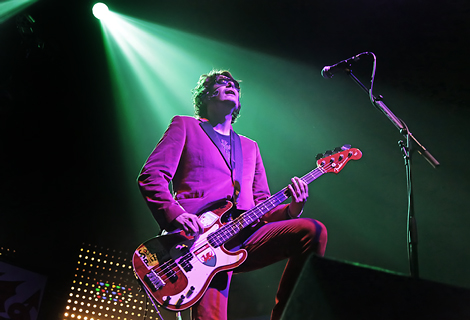 Manic Street Preachers at the Ritz, Manchester
A three-song encore did for the crowd. Kevin Carter’s trumpet solo belies the song’s harrowing story and Motown Junk received the sort of welcome it always has.
The inevitable end came with A Design For Life. As hundreds of people waved their pints in the air, linked arms and shoulders with those around them for the soaring chorus, maybe we all realised that yes, these are type of moments the song is looking to denigrate.
But nobody gives a shit. And you suspect neither James, Nicky or Sean would either.
Support act Public Service Broadcasting gave us a glimpse of the future via the past with a real eye-opening performance.
Helmed by what just looks like two archetypal nerds (the kind you’d see in Happy Days or some other dystopian comedy of that ilk), the ferocity of their music is underpinned by the eerie calls from the not too distant past; warnings of nuclear terror, safety regulations and the rapid ascension of new technology.
Signal 30 is the pick of the bunch. It runs and run and runs, clattering about with heavy chords and carpet bomb drumming. They have a collective sense of librarians channelling the spirit of The Prodigy about them; the combination of past and future in the present. All delivered with real panache and no shortage of bone-shaking aplomb.
Pictures by Getintothis‘ Sakura.
Further reading on Getintothis:
Godlike geniuses and fallen idols: Michael Jackson and The Manics Street Preachers.
Festival Number 6: Portmerion, Wales – picture gallery feat. Manic Street Preachers
Public Service Broadcasting, Baltic Fleet: The Kazimier, Liverpool