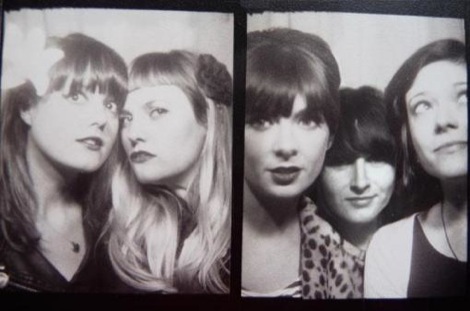 Singles Club swings back into action with breathtaking sliver of reverb and harmony-drenched garage-pop, Getintothis’ Chris Burgess takes notes on rubbish British sitcoms, living in mirrorballs and the small matter of animal conservation.

September Girls: Heartbeats – Single of the Week
Lying somewhere between the Jesus and Mary Chain and The Bangles, Heartbeats is a breathtaking sliver of reverb and harmony-drenched garage-pop.
“Don’t call me baby, I’m not yours” they coo, revealing a glorious darkness hidden beneath the Spector-esque wall of sound. Simultaneously inviting and creepy, this is a tune with secrets and leaves you instantly intrigued and compelled to hear more.
The Dublin five piece, whose debut album is due out in the new year, wear their influences proudly, with flashes of grunge, psychedelia and alternative rock. All in all, it’s truly blissful, with a dreamlike video to accompany it – full of skulls, stuffed magpies and one band member wearing a wedding dress in the bath, for reasons only she knows.

The Notwist: Close To The Glass
They’re back! The Notwist return with the title track from their new album – the first after a six year gap.
Close To The Glass is rambunctious and surprising, full of bouncing rhythms and singer Markus Archer’s melancholic drawl continuing the German band’s evolution from alt-rock to electronica-influenced wonder.
Glitchy and skewed without ever being abrasive, the track swirls moodily, moving around like tree branches in the wind.
The new album is out in February and will be followed by a European tour (sadly no Liverpool date, though).

Lover Lover: Young Free
The Paris-based trio Lover Lover return with another single from their recently released debut album, and Young Free’s video is a mash up of the seminal dance scene in Jean-Luc Godard’s Bande à part,
Full of Parisian cool (despite a jumper that even Noel Edmonds might have second thoughts about wearing) and fits seamlessly here. It’s a dazzling and breezy whirlwind affair, although slightly too lightweight for me to really fall in love with it.
I understand that Lover Lover have actually since split up as a band, with singer Eleanor Bodenham now ploughing her own furrow. Bonne chance, mes amis.

Three Trapped Tigers: Cramm
With this week’s news of the extinction of the African Black Rhino and the ongoing outrage over lion hunting in South Africa, Three Trapped Tigers provide some better wildlife news for us.
They’ve also released a three track live EP, with proceeds going to the WWF’s ‘Adopt a Tiger’ charity. It’s a voluntary donation too.
The noise-rock on offer isn’t going to be everyone’s cup of tea – all clanging drums, math rock rhythms and mad synths – but they are a genuinely exciting band underneath all that. It might take a few listens to really get into, although watching their drummer will keep you entertained enough for long enough. Nice shorts.

Fake Club: Midnight At KOKO
This is from the soundtrack to a new British comedy film, starring Sheridan Smith from Two Pints of Lager and a Packet of Crisps.
For the 2% of you still reading after that first sentence, please don’t be put off by that fact. There’s enough of interest here to keep you listening and tapping your foot along.
The London quintet providing a nice slice of familiar nightclub life, singing about snakebite, plastic cups, romantic trysts in alleyways and sleeping inside glitterballs.
Wait…what? Is that a thing now? Back in my day we had to get the night bus home.

Boxed In: Your Love Is Gone
Boxed In is the solo vehicle for Londoner Oli Bayston and this is an accomplished debut single, rising as it goes along to a glorious crescendo of hazy guitars and crashing drums.
I have seen better videos though. A snowy train journey with Xbox-glitch style overlays doesn’t do this song justice. As nice as the vistas are, it just reminds me that Merseyrail will be a nightmare over the next few wintery months. Yeah, cheers for that.

Miss Kittin: Maneki Neko
This is confusing and scary. A strange eurodance song that slightly tilts towards Barbie Girl at one point, with a video about a Japanese cartoon mouse, produced and sung by a French DJ. What’s going on?
Maybe it’s the theme tune to the next Cbeebies smash hit – a kind of bloodthirsty Rastamouse. Or possibly the French have launched their own version of Danger Mouse. Perhaps it’s big in Japan. Who knows?
Miss Kittin’s vocals are instantly recognisable from Silver Screen Shower Scene, which was featured on the 2 Many DJ’s As Heard on Radio Soulwax. However, here her monotone lo-fi Gallic vocals are replaced by something slightly more melodic.
Literally nothing about this song or video makes sense, and it hurts my brain trying to comprehend what’s happening, which is why it’s fantastic!

Pandreas: Rås
A rousing and hypnotic track from Andreas Kleven Rasmussen, the Norwegian house producer behind Pandreas.
Rås is evocative, playful and nostalgic, like a subdued Royksopp. It’s laid back and doesn’t try to overegg things. Could have done with a cartoon mouse, though.

Noah Kin: 822 / Phantoms: Voices (Split Single)
I really like Noah Kin. He’s incredibly talented, already on album number three before his 20th birthday and looking set to become a huge star.
This isn’t his best work though, with beats sounding slightly weedy and an overuse of resonance filters, it falls slightly flat. A rare faltering moment from the Finnish/Nigerian prodigy.
822 is a split single release with Finland’s Phantoms – worth checking out with their synth-pop tune Voices, a spacious yet gritty laid back groove.
After all the mentions of rhinos, mice, lions, tigers and…erm…Kittins, it seems apt to end this week’s reviews with a guy called Noah.