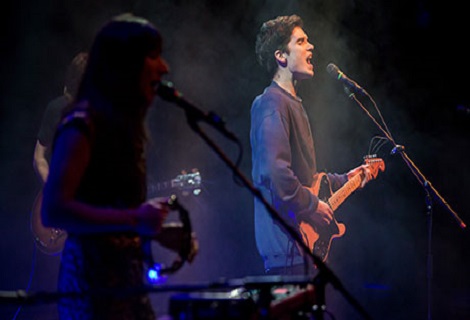 From the Blue Mountains, near Sydney, Cloud Control is a closely guarded secret likely not to be given away lightly.
The venue may well be reasonably quiet on this winter night, but the crowd there illustrate the band’s appeal: teenage hipsters, too-cool twenty something’s and middle aged musical connoisseurs.
The group won the Australian Music Prize back in 2010 and it’s easy to see why. Cloud Control’s brand of dreamy, beat heavy songs, sound like a combination of the best of Sigur Rós and The Shins.
High energy psychedelica was the order of the evening, bringing echoing vocals, distorted guitars and the kind of relentless bass lines that stick in your ribs.
The audience were captivated from the opening strains of Scream Rave, to the final song, Nothing in the Water, and in between was a balanced mix of stuff from their back catalogue. Standout songs were Gold Canary (obviously), Happy Birthday and Moonrabbit.
The crashing drums and cymbals provided the perfect backdrop to their vocals and the bruised light that washed over the razor-sharp cheekbones onstage turned the impersonal Arts Academy into a trippy cocoon.