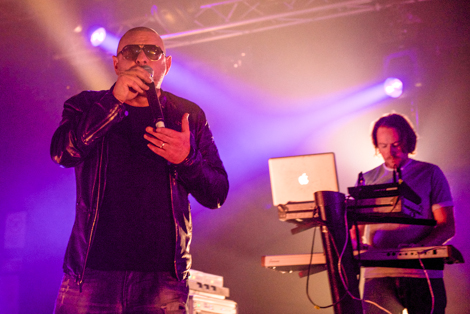 Happy Mondays return with their original line up for a 25th anniversary run through of early classic album Bummed, Getintothis’ Jamie Bowman finds them somehow clawing their way back to what made them so popular in the first place.

Few bands have treated their sizeable legacy with such a don’t-give-a-fuck attitude as Happy Mondays.
Through numerous reformations, I’m A Celebrity… appearances and now Shaun Ryder’s latest foray into the world of UFOs, it’s sometimes hard to remember that behind their cartoonish public image, there is a band who recorded two of British independent music’s finest ever albums.
Exhibit A comes in the form of 1988’s Bummed, whose shambolic monotony somehow chimed with that year’s Second Summer of Love, setting Ryder and Co. on the road to excess which would ultimately lead to their status as Madchester icons.
The decision by Ryder to reform the Mondays’ original line up to celebrate Bummed’s 25th anniversary was something of a surprise to seasoned Ryder watchers, not least as the band announced the news in an interview with Phillip Schofield on This Morning. 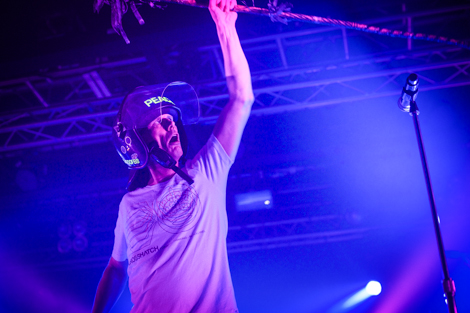 Bez having a typically quiet night at O2 Academy, Liverpool
Just a few years previously Ryder’s brother, Paul, had vowed never to play with his sibling ever again while genius guitarist Mark Day and keyboardist Paul Davis had always been absent from previous get-togethers.
So there’s something pretty moving about seeing the group’s original line up, plus later addition Rowetta, take to the stage for the first time since 1994. Hands have been shaken, hatchets buried and with Bummed giving the previously freewheeling Mondays a strict framework to play with, the following hour is one of the most enjoyable and joyous gigs of the year.
The band immediately sounds superb as they recreate faithfully producer Martin Hannett’s swirling, claustrophobic production work.
The likes of Performance, Bring A Friend and Fat Lady Wrestlers all have that spacey, strangely refracted, slightly slowed down sound that mirrors the Ecstasy experience to a tee.
Day’s totally unique warped funk guitar confirms the fact that the postal service’s loss is baggy’s gain. 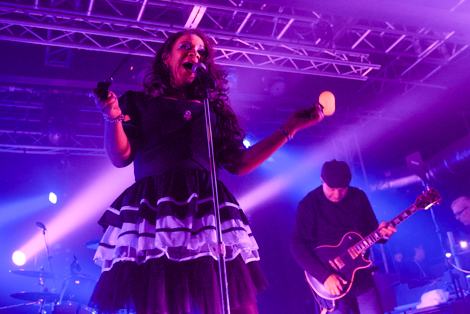 Rowetta in full voice at O2 Academy, Liverpool
Separating the Mondays from drugs is of course impossible, but this is a cleaned up Shaun sipping from nothing stronger than a bottle of lager and chuckling as Bez conducts the masses with a voodoo staff.
Ryder’s sobriety gives you another chance to test out his former cohort Anthony H. Wilson’s assertion that Shaun was a lyrical genius and in the main he does not come up wanting.
For all of Do It Better’s exuberant gibberish, Ryder can still implant a phrase or a line in your brain, whether it’s the slurring sexuality of Mad Cyril or the pop culture references of Lazyitis.
Towering above them all is W.F.L., the alum’s one true monster which today sounds even more like the invention of something special than it did at the time Paul Oakenfold got hold of it.
Interestingly we don’t get the album in its original order but this seems more out of a new found confidence and hunger to experiment than drug-addled confusion.
Even early classic Tart Tart gets a rare airing from a band relishing the opportunity to remind both them and us of their brilliance. They finish with three era-defining tunes which came after Bummed’s day-glo excellence had set them on the path to glory.
Hallelujah, Step On and Kinky Afro all sound like the anthems they are but it was the songs off Bummed that really saw the Mondays reclaim their crown.
Pictures by Getintothis’ John Johnson.
Further reading on Getintothis:

Share. Twitter Facebook Google+ Pinterest LinkedIn Tumblr Email
Previous ArticleBroken Men to launch new records with District knees up
Next Article The music battle for our soul – are you in or out of the box?