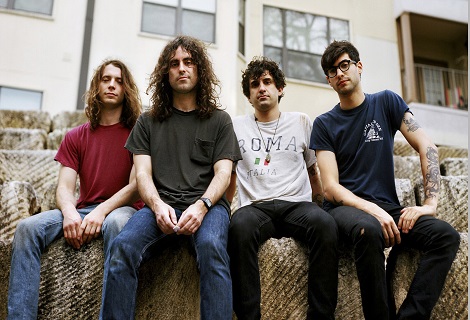 This week’s Singles Club finds Getintothis’ Chris Burgess battling through Status Quo backwards, acting like a fictional police informer and being forced to hear about somebody’s sex life…all for the love of the music.

The Men: Pearly Gates – Single of the Week
BANG! Quick off the blocks, The Men clang into action from the word go!
This sounds like Status Quo being played backwards (which can only be a good thing, right?). It’s so confusingly, fantastically crazy it sounds like it should be played up a tree, and I don’t even know what that means.
There’s just something effortlessly cool about them – all gnarled guitar lines, blasted saxophones and pulsing bass. This is taken from the Brooklyn-based ‘punk’ band’s fifth album Tomorrow’s Hits, and is the type of song that plays as you make friends in moshpits.
The Men are playing Liverpool’s East Village Arts Club on the March 28. You just know that’s going to be one of the gigs of the year.

Ava Luna: Daydreams
A close run thing again this week, with this spiky, groove-filled blast of soulful power from Ava Luna nearly taking the single of the week crown.
Daydreams recalls the stabby guitar sounds of The Rapture and the more esoteric 1970s New York experimental bands. It also features one of the best screams I’ve heard in a song recently.
This is music to make you strut down the street like Huggy Bear.

Speedy Ortiz: American Horror
Cheery indie-grunge sounds here from Sadie Dupuis and her merry men.
Sounding two parts Juliana Hatfield to one part Dinosaur Jr., this is a belting song, taken from their upcoming EP Real Hair.
It reminds you of a more innocent, lovely time – before Britpop – when guitars were crunchy and feedback ruled the world.

Real Estate: Talking Backwards
The nostalgic adventure continues, as New Jersey’s Real Estate treat us to a slice of indie that could have come out in 1992.
Lovingly precise guitar riffs propel singer Martin Courtney’s delicate vocals forward. Even the video looks as though it was shot on a massive, VHS tape-filled camera!

Kevin Drew: Good Sex
Suddenly, Kevin Drew interrupts us all to let us know that he’s slept with someone. Thanks for that, Kev.
Not the greatest tune from the Broken Social Scene singer, just a odd, bland ode to sexual intercourse. When they say ‘sex is overrated’, this is probably what they’re talking about.

The Black Delta Movement: Ghost Dance EP
A four song collection from the Hull indie band, who have been making waves in the North East for some time now.
The standout track – Is That Blood On Your Hands? – has a slow burning, almost doom-laden sound with a psychedelic edge, like a gang of trippy Vikings are about to storm your village. Eek!
The rest of the EP is standard indie guitar fare, which isn’t too bad, but leaves you with the strong feeling that they would benefit from being more experimental.

Scraps: Projections
8-bit synths, compressed, pretty vocals; Projections is like something BMO from Adventure Time would come up with, given half a chance.
If you’re in the right frame of mind this will make you dance. If you’re not, it will just sound like someone singing while the start credits to a MegaDrive game load up.

Merchandise: Begging For Your Life / In The City Light
This is a big-sounding song from the 4AD new boys – weighing in at 14 minutes long (although edited below).
The Floridian trio are usually known for their lo-fi, DIY approach to music. This is the complete opposite – a beautifully crafted soundscape and stream-of-consciousness lyrics.
I’ve replayed this song about seven times now, and I’m still startled to hear something new each time.

Wild Beasts: Wanderlust
The Beasts are back, after a year away, and have lost none of their unique sound.
Vocalist Hayden Thorpe’s falsetto cutting like a diamond through the icy synths and electronic beats of this track, the first to be released from their new album Present Tense.
The video is one of those arty ones, however. You know the type, the ones that don’t really make sense but feature a load of odd looking people doing odd looking things. REALLY nice song though.