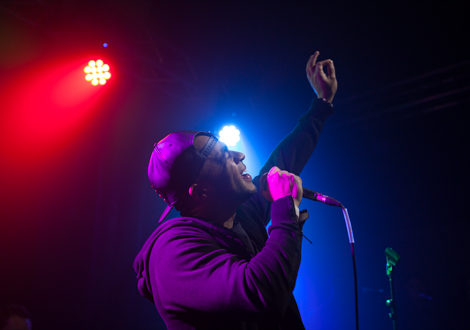 Esco Williams moves into a new phase in his career at East Village Arts Club, Getintothis’ John Gibbons got ready to plug in and play.

It’s very much a Saturday night to be indoors and an impressive number of people are in the warmth of East Village Arts Club by 7pm to catch the highly rated Roxanne Jones.
Singing mostly upbeat Beyonce-style R&B/pop, she is probably a stronger singer than performer at this stage, although as it is her first time backed by a full band she may be getting used to her surroundings.
Frighteningly she is still only 21, and performance can be taught whereas her voice is a gift.
However we would still like to see her having more fun if she decides to go down this direction with her music. She seems much more comfortable when ending with the ballad Living a Lie; a song many of the crowd recognise and enjoy. 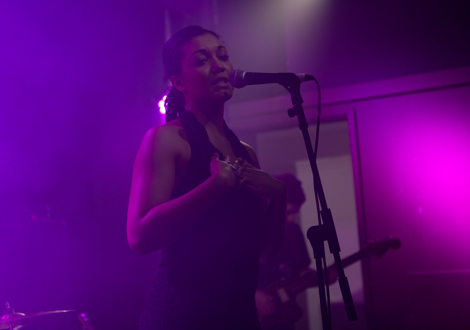 Roxanne Jones at East Village Arts Club, Liverpool
With far fewer inhibitions Mic Lowry arrive to screams and video phones.
We have often (well, occasionally) wondered where boy bands emerge from when you see them full formed on the TV. Apparently it’s here.
They quickly breeze through a set of original material and covers (including a nice version of Disclosure’s White Noise), sharing lead vocals throughout, with the minimal accompaniment of just an acoustic guitar allowing their harmonies to shine through.
Afterwards they gather at the side of the stage and we are barged out the way by teenage girls keen to get a picture. We can confirm they have all mastered the moody pout, which is good news for them. One less thing to worry about. 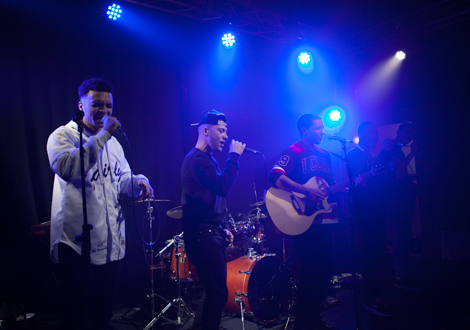 Mic Lowry at East Village Arts Club, Liverpool
But everyone is back in place for main event Esco Williams.
Backed by a 10-piece band, he is full of energy starting with his most upbeat and well known tunes such as New Challenger and Starry Eyed.
Once the crowd have been won over, he changes the pace, performing newer material of a more gospel feel.
Surprisingly he leaves out new single Breaking Bones, but songs such as Sooner Or Later are along a similar vein, heavy on emotion and more prominently featuring his five backing singers.
Perhaps slightly nervous about showcasing his change of direction for the first time, he assures the crowd he “still wants to make people dance“, but is also keen to share things he has been through personally. 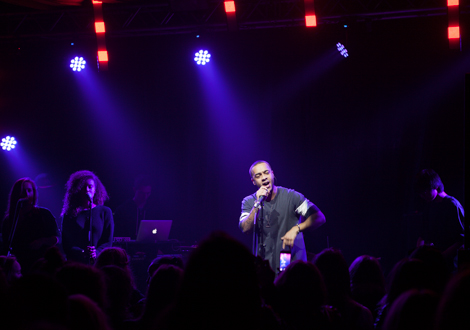 Esco Williams at East Village Arts Club, Liverpool
It is to his credit that he holds an audience more used to a fast paced performance throughout, although it is hard not be dazzled by the vocal gymnastics on display.
It’s a brave new direction from Esco, as he acknowledges when he tells the crowd he “hopes” they like the songs as much as he does. However the reaction of the room that night suggests it is a risk that is likely to pay off handsomely.
Pictures by Getintothis’ Jack Thompson.
Further reading on Getintothis: