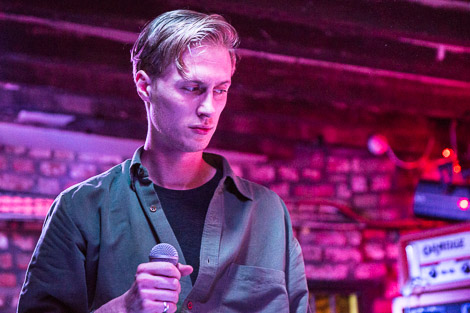 Eagulls and an assorted collection of noise-makers rolled into Liverpool, Getintothis’ Nick Lodge finds something of substance buried beneath the dissonance.

“This is the beginning of the night,” states the head man of Salem Rages, as plastic skeletons hang from their accompanying microphones.
And he’s not wrong, as the band roar into their first song; dark riffs flying into the night and drumming furious enough to wake the dead. Then comes the shouting. Is this horrorcore? We don’t know.
But their Sabbath meets Ramones brew contains plenty of dread and foreboding. A young band with an engagingly eccentric frontman, they’re not afraid to mix with their audience – something this crypt-like venue lends itself to, with barely a stage, and no barriers. There are plenty in attendance, especially for such an early start, and given the positive reception, a few of them will be back. 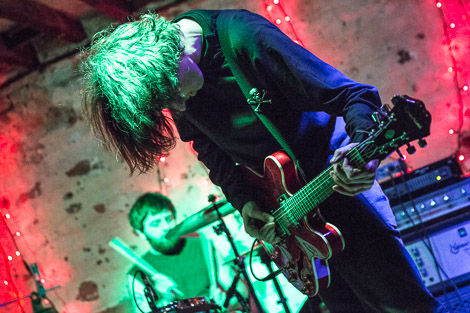 Salem Rages live at The Shipping Forecast, Liverpool
Then comes the intermission, otherwise known as Mind Mountain. Considering they’re supporting a casually-labelled punk-inspired band, it’s perhaps ironic that their set harks back to the late-60s or early-70s, and the penchant for indulgence.
Their twenty minute jam-groove type thing ticks the boxes – a quiet bit, then a loud bit, then a light bit, then a heavy bit, then a widdly bit, and repeat. It really is like punk never happened, as they say. There were many in the audience nodding along to their technically-proficient psych groove. We were just nodding off (shocking, Nicholas – editor’s note).
Top of the undercard, Autobahn sound like they should be a Kraftwerk tribute act.
In fact they’re a product of the Leeds psych-rock factory, complete with a frontman wild-eyed in religious belief beneath a mop of curly hair, and that epic, echoey vocal that seems the effect du jour for bands of a psychedelic bent.
It’s certainly effective the first few times around, but Getintothis can’t help feeling it ultimately diminishes the songs; heavy on atmosphere at the expense of song subtlety. It makes us wonder if the band are a one-trick pony.
As if reading our mind, along comes a song that seems to buck the trend, allowing a little light and shade. We’re convinced it’s called Raise the Bar, and suggests that perhaps they may have a little more to offer if they can leave the main psych highway and explore less-travelled backwaters. 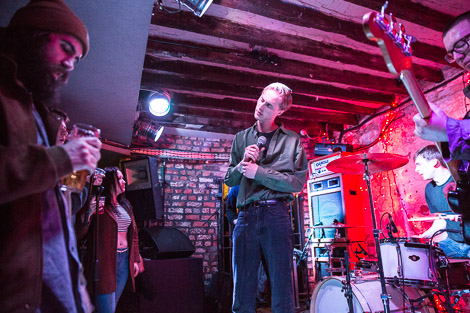 Eagulls live at The Shipping Forecast, Liverpool
It’s left, then, to Eagulls to serve up the tastiest morsels from tonight’s smorgasbord of musical stratospheres. Their brand of streetwise, psych-inflected, punky pop has a swagger that suggests confidence and belief, not in any spiritual goal, but in themselves.
The band themselves are a rag tag of fashion sensibilities. The singer is slick and manicured, and the bass player wouldn’t look out of place on a picket line, while one of the guitarists presents the image of an axe anti-hero, his downbeat, forgettable attire at odds with some sparkling fretwork.
Put together, though, on several occasions during tonight’s blink-and-you’ll-miss-it set they create something memorable. Sharp pop tunes are belted out, and the mosh pit responds with some good-natured rucking, to the obvious amusement of singer George Mitchell.
Again, though, the sound frustrates a little, the echoing effects detract from the strength of the songs and there’s simply not enough cutting through the mix to show their promise. Or maybe we’re just out of step with the times, and we should just follow the moshpit’s lead, and surrender. If I want clarity and meaning we’ll buy the record, as a live experience Eagulls can soar – they’re angels with very dirty faces. 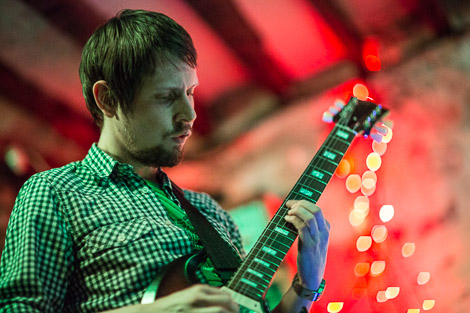 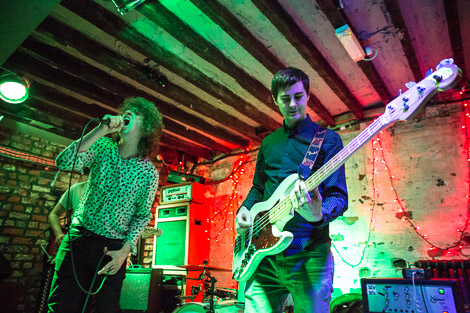