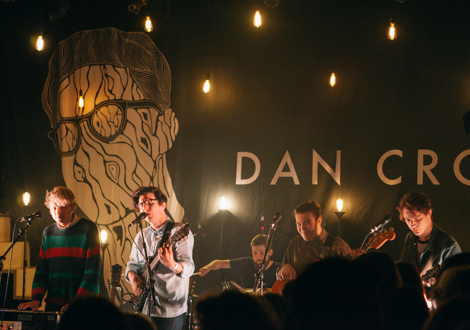 Dan Croll jets off to the US of A, but not before saying cheerio to his spiritual home, The Kazimier, Getintothis‘ Alan O’Hare laps up a global popstar in the making.

Liverpool’s latest breakout songwriter is about to swim the mainstream.
But it’s the last time we’ll see Dan Croll in a room the size of The Kazimier. It’s a shame, as his brand of, shall we say electro-folk, cuts the mustard best in an intimate room. But such are the bigger places he’s destined for – especially following his appearance on Late Night with Jimmy Kimmell this week.
First, however, the GIT Award 2014 nominee closed his UK tour with a rammed date at The Kazimier. It was a cracker.
Croll‘s five piece band were in the pocket all night and proved why it’s so important to pay no less than complete attention to groove, as well as melody. Getintothis has described the songsmith as ‘Paul Simon with a laptop’ recently. Lazy? Perhaps – but it’s a sound bite that suits, with songs as intricate but melodic as In/Out and Compliment Your Soul.
He may have been born in Newcastle-under-Lyme, but this was a packed homecoming for Croll. Playing nearly all of debut album, Sweet Disarray, Croll seemed a little edgy at first – but the instrument swapping seem to strangely help the gig settle down and we soon moved through the fair. 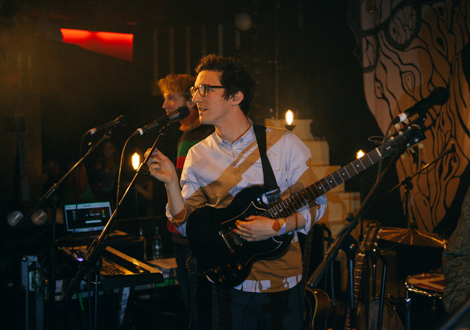 Dan Croll live at the Kazimier
Tunes like Only Ghost and the finger-picked, brushed-drum cognitive magnificence of Home were real highlights, but The Kazimier crowd deserve a mention too: making a racket when required, but paying Croll‘s craft complete respect when a song demanded attention.
Encoring with From Nowhere and the brilliant title track of his recently released debut album, Croll had the room in the palm of his hands. With a busy festival and touring season coming up, it’s a feeling the young man will have to get used to.
What happens next could be the biggest thing to happen to him yet.