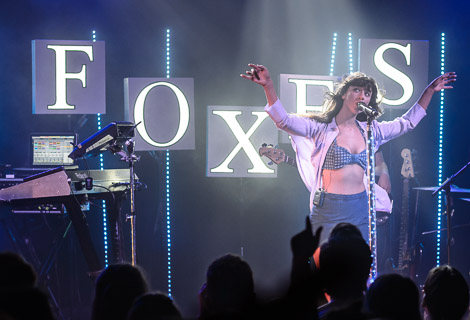 Astral, ethereal and twinkling, Foxes are catching everyone’s attention. A Grammy Award winner and a top ten single, Louisa Rose Allen has been quickly garnering much attention over the past 18 months, gradually making a name for herself.
After rescheduling her show from March two months, this intrigue seems to have made a difference. Upgraded to the main room of East Village Arts Club, the 24-year-old performed to a packed out crowd. 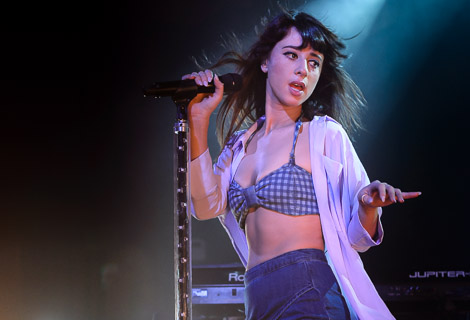 Foxes performing live at East Village Arts Club
Young, beautiful and talented, this girl seems to have it all but she’s far from a processed pop star. As we looked on, Foxes‘ quirky style shone through as she carelessly skipped around the stage waving her arms every which way. Her effervescent performance is paired with BIG choruses married to a whirlwind of synths and powerful vocals drawing you in to a fantasy world where everyone stays youthful and gorgeous.
She pouted her way through album tracks to kick off the show, including Talking to Ghosts as her ardent fans (mostly teenage girls) mouthed along to every lyric. Suddenly screams commence as she belts out, ‘Don’t tell me your youth is running out!‘ – and the dancing begins. 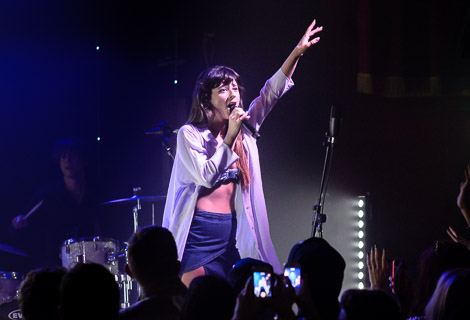 Foxes performing live at East Village Arts Club
After the pounding drums and electro, next up on the hit list was Beauty Queen, a more reflective, softer track about looks being trivial, which is hard to take coming from someone whose beauty and flawless persona is part of her rising stardom.
Clearly still new to the game of gigging, Foxes nervously laughs in between tracks refraining from talking too much to a room of entranced faces. The overwhelming feeling of living her dream still seems to be raw for the singer as she thanked everyone for their support, taking a picture of the crowd to capture the evening. 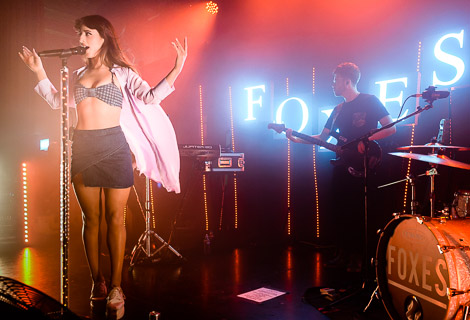 Foxes performing live at East Village Arts Club
The night ended on a high with upbeat pop tune Let It Go For Tonight. We came away feeling carefree and induced with youthful vigour. She had convinced us the only thing to do next was to grab several drinks and spontaneously see where the night could take us. For Foxes it seems the sky really is the limit. 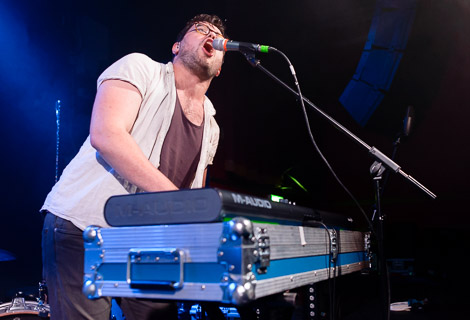