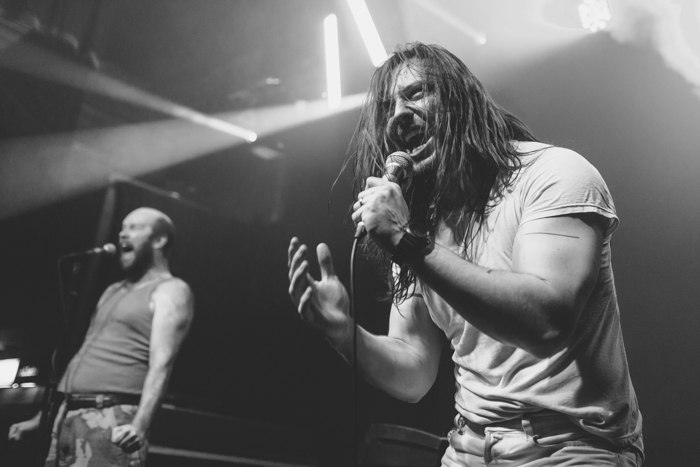 There was an expectant atmosphere in the air at EVAC to see Andrew WK play.

Known for his hard partying style and rocket-paced songs, a lot of people had come along to see what they made of his Special Solo Show, his first without a full backing band. The place filled up early, with a big queue forming outside the venue about an hour before doors opened.

First on the bill were the undisputed champions of music entertainment, Spanish Announce Team. Wearing a variety of Mexican luche libre masks, they stormed their opening slot, growling their way through a variety of wresting walk-on tunes, to ECW-style roars of “this is awesome!” and the Daniel Bryan-inspired “Yes! Yes! Yes!” chant. I haven’t seen a crowd go so nuts for an opening act for a long time, and although the music wasn’t quite as spectacular as their outfits, the band know how to work the crowd immensely.

Covers of the intro songs of Vince McMahon, Hulk Hogan, Daniel Bryan and Shawn Michaels (among others) showed that the band were true fans of wrestling. But that’s possibly their weakness as well as their strength. As gimmicks go, it’s a good one, with a ready-made and enthusiastic audience.

However, it doesn’t give the band much room to expand, and anyone venturing in who doesn’t have a big knowledge of wrestling would be left wondering what the hell was going on. Judging by the amount of fans having their photo taken with the band, however, I don’t think that’s anything they need to worry too much about. 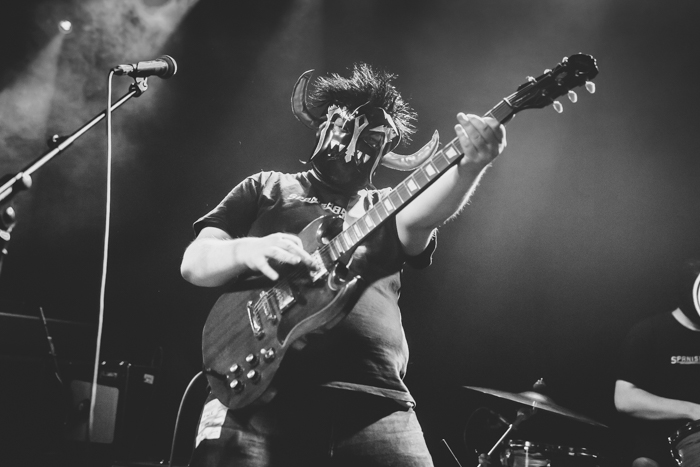 On the opposite side to this were White Blacula, fast becoming one of my favourite local bands and deserving of a much more appreciate audience than they received. With tunes perhaps slightly too extravagant for this gig, the band still delivered fantastically, with their saxophone player crowd-surfing (while still playing his saxophone) during The Great All Knowing, towards the end of their set.

Rousing renditions of Sharp Elbows and Pyramid Twist showed their full, riotous force. The audience grew more involved as their set went on, reacting well to their final song and new single The Big Release, but White Blacula are perhaps slightly more advanced than the crowd expected. Their sax player – dressed in a bikini and pair of Daisy Dukes – has the best eyebrows in showbusiness, too. 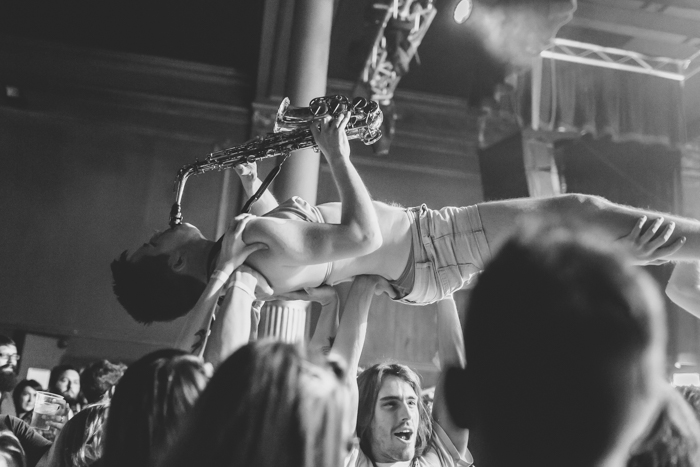 After a short wait, Andrew WK hit the stage. From the very first moment you could tell what kind of a gig this was going to be. Pints flew from the very first note, with a moshpit instantly forming in front of the stage. Andrew, dressed in his trademark white t-shirt and grubby white jeans, bounced energetically onto the stage to the pulsating sounds of a backing track and hailed the crowd, before launching into It’s Time To Party on his keyboard (the only instrument onstage).

There was no musical foreplay here, no warming up of the crowd, just straight into the action. Covered in beer, we must admit we were reluctant to get too involved in the moshing (it was a bad night to wear brand new glasses).

Accompanied by Blakey Boy Canaris (ostensibly just a bald, bearded and shouting man in a vest, looking very much like one of the 90s WWF tag-team The Bushwackers), Andrew WK rattled through a 20-minute medley of his back catalogue, including an especially fine version of Take It Off. It seemed odd to hear such loud music and just see one man playing keyboards on stage. It was as though Elton John and The Ramones had been collided together in the Large Hadron Collider. Andrew’s classical training shone through though, and he seemed note perfect for the entire gig.

However, the question has to be asked – is this partying? There’s a big debate over the merits of Andrew WK’s music. In one camp there are people who go all-out batshit crazy for his songs, and in the other are people who simply don’t understand the love for the man. As long as you recognise it as big, dumb fun and don’t take any of it seriously on any level, you can have the time of your life at one of his gigs. Trying to deconstruct his act will only leave you more confused.

The crowd must have won the moshpit of the year award during We Want Fun, as more pints and bodies flew left and right, crowd-surfers went up and down and Andrew and Blakey screamed their lungs out. Following that we saw Andrew show off his more jazzy side, showing more glimpses of his obvious talent on the piano.

He also managed to get the crowd moshing during the more downtempo and hip hop songs, before sending them almost feral with a truly excellent I Love New York City, which included a duet with a stage invader who managed to pull off the most note-perfect stage dive I have ever seen – to the obvious and glowing admiration of both Andrew WK and the crowd. Finishing even more strongly than he started, the audience went over the top for Party Hard and I Get Wet, which saw a mass crowd invasion to end the show.

If you walked into any other place and saw a guy with a piano and a bearded guy in a vest shouting at you, demanding you party, you might walk out, but with Andrew WK it works perfectly. There’s no denying that Andrew WK knows how to get people partying.

There’s something extremely infectious about both him as a person and his music.  As a live experience it’s a great chance to put your brain away for an hour or so and just have stupid fun getting sweaty with a room full of people doing likewise. Judging by the big grins on everyone’s faces at the end, I’d say the party was a success.