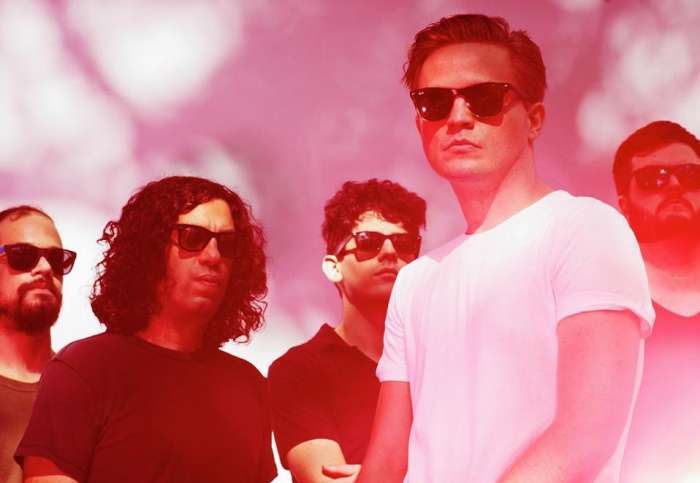 Merchandise return to Liverpool armed with new album After The End, Getintothis’  Will Neville reports.

Merchandise are a Florida-based trio made up of multi-instrumentalists Dave Vassalotti and Carson Cox, who also sings, and Patrick Brady on bass.

After The End, their third full-length album and first for 4AD, will be released at the end of this month. They are a good fit for the label, bringing to mind some of the classic sounds from Ivo Watts-Russell’s label.

This new album features poppy singles Little Killers, with its echoes of slightly gloomy 80’s indie like The Chameleons and Echo & The Bunnymen, and Enemy, which brings to mind more greats of that era such as The Smiths, Felt and The Weather Prophets. Other highlights include Green Lady, with its (you guessed it!) rather 80’s keyboard and drum sounds.

After The End is the follow-up to their second album proper Children Of Desire, released on Katorga Works in April 2012 that includes a couple of tracks that fly past the ten-minute barrier without boring the pants off listeners. This was followed by the Totale Night ep on the Iowa label Night People last year.

Shopping emerged from the ashes of slightly murkier CoverGirl in London in November 2012 and released their funky, angular but tuneful, post-punk debut album Consumer Complaints on MÏLK Records a year later, on vinyl and download only. They describe their sound as “propulsive bass lines, primitive disco-not-disco drums and guitar lines sharp as broken glass” and have been enthusiastically championed by Marc Riley on BBC 6 Music. The band consists of Rachel Aggs on guitar (who also writes the I Trust My Guitar music fanzine), bassist Billy Easter and tub-thumper Andrew Milk. They are currently in the process of recording their sophomore release.

Fans of all kinds of 80’s post-punk and indie, and more modern heirs of those sounds such as Savages and The Futureheads, should snap up a ticket for when Harvest Sun bring Merchandise and Shopping to The Kazimier on Wednesday, November 26. Tickets £9.