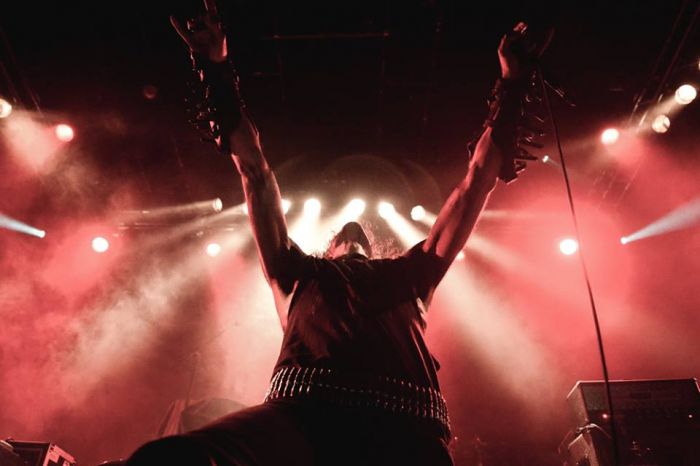 In the first of our metal columns, Getintothis’ Laura Coppin salutes the colossal sounds of Necronautical, 1349, Cannibal Corpse and Xerath.

Channel 4’s car-crash-TV masterpiece First Dates isn’t something you’d initially expect to inspire a reverie on the nature of alternative music, but one evening recently yours truly found herself staring aghast at what can only be described as a complete parody of a metal fan. While drinking wine alone and watching re-runs of excruciating dating shows doesn’t exactly put anyone on the moral high ground, it was still bizarre to see the degree to which he defined himself by his love of ‘obscure’ music.

And what’s wrong with that? I hear you ask. Well, it’s because the first band he went on to name was Nightwish. Not that there’s anything wrong with Nightwish, but ‘obscure’ definitely isn’t the word you’d use to describe a band who has sold more than 8 million records worldwide.

This chap didn’t have the excuse of teenage angst (we’ve all been there, cloaked in darkness and pure ennui, hatefully scorning those who didn’t fit into our own musical niche…), he was a grown man who presumably must have been aware of their status as one of Finland’s most successful musical exports. What was almost worse however, was the fact that this wasn’t simply confined to him.

On one of his more successful dates, his ‘I <3 Nightwish 4eva’ announcement was met with a flash of recognition and a gleeful smile – prompting him to splutter ‘you know Nightwish?’ as though he had never before met another living soul who had even heard their name. She, in return, entirely unnecessarily (and with no apparent trace of irony) gushed ‘you’ve HEARD of Nightwish?!’ before they then proceeded to quiver at one another unsettlingly.

If acts that successful can be seen as obscure, then what does that mean for the countless bands still hoisting the extreme metal flag on the UK’s musical front lines? Dingy, sweaty places all over the country are playing host to fantastic talent every week, yet few bands have the crowds they deserve there to witness them.  No matter how obscure you believe your musical tastes to be, dig a little deeper and go to see a band you’ve never heard of – you might just witness the beginnings of something beautiful.

Ranting aside, today’s musical landscape is shaping up to be a very exciting one indeed.  June saw the release of Necronautical’s Black Sea Misanthropy, a record which exploits the (as yet unsigned) band’s nautical theme to romp its way across the ocean waves with hateful abandon. Crashing storms and driving rain weave in and out of punishing guitars and bestial howling, with tracks such as Ghosts of Men making for gloriously compulsive listening. A remarkable progression from their first Slaying the Leviathan EP, Black Sea Misanthropy marks Necronautical as a band very much on their ascension.

Black metal veterans 1349 have their own much-anticipated release on the horizon; the rather clumsily titled Massive Cauldron of Chaos. Don’t let the title fool you though – it blows their most recent releases out of the water. It still doesn’t reach the sonic heights (or should it be depths?) of Hellfire, but it is nonetheless a return to form which bodes well for their Chaos Raids Europe tour in November.

Speaking of veterans, there can be few reading this who haven’t heard at least one track from Cannibal Corpse’s newly released A Skeletal Domain. Notable for its razor sharp production, the album mixes their trademark grotesquery with brutal riffs and Corpsegrinder’s unmistakable guttural vocals. They do stick to their formula it has to be said, but it’s a formula that has served them well; this marks their 13th album. Fittingly, the band have also brought out their beautifully illustrated biography Bible of Butchery, a tome which takes fans on a nostalgic trip through the annuls of their genre defining history.

Experimental bands like Trioscapes are also making themselves known, issuing forth a mind boggling fusion of prog-rock and jazz. Not for all tastes certainly, but for those who like their music on the rampantly unusual side their new album Digital Dream Sequence is well worth a try.

For those among you who long for the unadulterated rock’n’roll party that was the 70s and 80s, you need look no further than Norway’s icy shores. Both Lonely Kamel and Audrey Horne have new offerings, with the former edging ahead due to the filthy swagger running through Shit City. Pure Heavy is still a great record, but it carries with it a touch of the characterlessness that typifies stadium rock.

This is not, however, a criticism that can be levelled at either King of Asgard or Gormathon. Both bands have produced remarkably meaty, distinctive records; songs which seize you by the ears and refuse to let go until the last squeal of guitar fades away. King of Asgard’s succinctly named Karg opens with Runes of Hell, a brutally catchy track which sets the precedent for the rest of the album. Gormathon’s Following the Beast opens with Remedy, a delightful meld of chugging guitars, deep growls, and soaring melodies which still manages to be bested by the songs which follow in its wake.

The sheer number of quality releases coming out at the moment is astounding. Xerath for example have transformed their sound with their third offering III; embracing a more melodic sound but losing none of their technical wizardry. There are of course absolute stinkers rearing their heads, lest you start to think there’s nothing that this columnist’s ears don’t writhe in rapture to. There’s too many musical turds in the world however to waste any time discussing them here – let us instead spread the twisted gospel of the bands who deserve it.