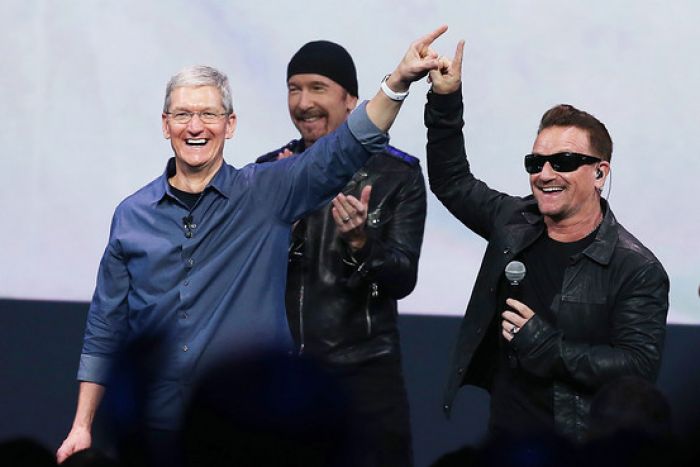 U2 and Apple CEO Tim Cook

U2 dropped new album Songs Of Innocence on an unsuspecting half a billion people’s iTunes for free, Getintothis’ Ian Salmon salutes both Apple and Bono for their audacious game-changing manoeuvre.

Getintothis found ourselves watching the Apple presentation somewhat slightly delayed and purely by accident. ‘Nice new phones’ we thought and gently cursed taking out a two year contract last month. Looked at the watch and thought ‘Yes, nice and shiny, new toy, one of them please’. ‘A game changer’, we said to a friend on Twitter.

And then U2 came out. And performed what was, in all fairness, a fairly ropey sounding live version of what was basically just another U2 single. One more U2 song. Unnecessary, unremarkable, a pale imitation of a Chris Martin Band track (and that’s as damning an indictment of anything as we can imagine).

Staged, stumbling, corporate. Bono claimed that ‘people think U2 haven’t recorded a new album in five years. We have, we just haven’t released them’ asserting the idea that they were waiting until they had something that could stand alongside former glories before unleashing it on the world.

‘Bono. Seriously. If you think that is as good as anything you’ve done in the past then you clearly haven’t listened to it’, we muttered at the screen and commenced to composing a witty tweet to say exactly this.

And as we typed Bono went into his…well, his Bono bit and started on an obviously pre-scripted conversation with the guy who, well, runs Apple. ‘We want to get this to as many people as we can’ he said. ‘We can do that’ said the guy, ‘we’ve got half a billion customers’. ‘Could you get it to all of them?’ queried the perma-beshaded diminutive frontman, ‘for free?’ The answer was a clear affirmative. ‘How soon could you do this?’ mused the little Irish fella. ‘How about in five seconds?’

This was clearly becoming ridiculous. This was stupid. This was pantomime. This was…hold on…this was happening. They were counting. Down. Five to One. This was real.

A minute previously there was no U2 album. You could get good money on there never being another U2 album; they’d dried up, become irrelevant, pointless, writer’s block was their entire being. Then everything changed and half a billion of us had a new U2 album in front of us. Yes, whether we wanted it or not, we can hear you complaining you know.

This, we went semi-public on Facebook to say, was unprecedented. We thought that an album couldn’t be an event any longer. Thought there was no way of making people talk about an album release any more; the world was too blasé. “Well, there was Bowie last year” pointed out a friend. Yes, there was Dave, we forgot Dave, how could we forget Dave.

An album from nowhere but we still had to get it, still had to make a choice; this was just there. Immediately. The biggest album release of all time. An audience reached instantaneously of a size that no other artist had ever attempted. Everybody that could possibly fancy a new U2 album receiving at exactly the same time. Plus, yes, a lot of people who wanted very little less than a new U2 album but nobody’s making you listen to it are they.

As a piece of theatre it was jaw dropping: as a concept, audacious. We were left staring at the screen musing ‘have they really just done that?’

They had. A new album had gone from announcement to ownership in five seconds. U2 and Apple had just managed to raise the bar further than anybody had ever considered previously. You can have it, you can have it now, we can communicate with you directly, we have just killed the record companies. 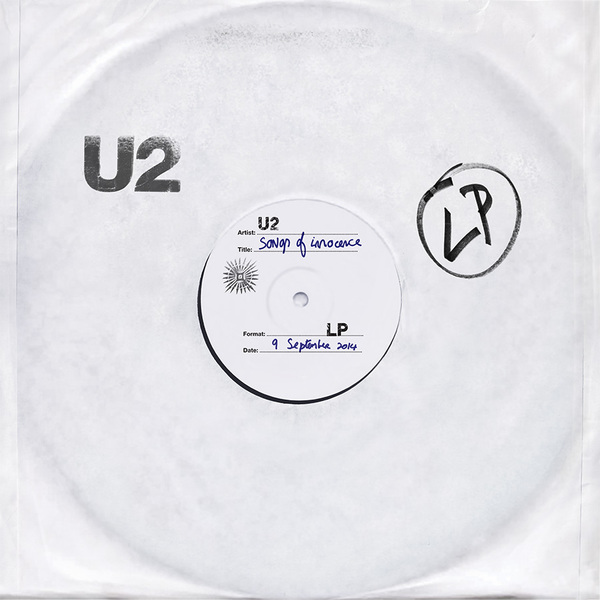 U2: Songs of Innocence

Yes, we can hear the arguments; U2 have just convinced the world that music can, is and should be free. U2 have devalued all music. U2 can do this because they’re already richer than God, what chance does it leave every act that actually needs to make a living? And they’re all valid arguments, particularly that last one. But honestly? The world doesn’t need a major act to tell it that music is free, they already know it, they already believe it. There are less people willing to pay for ownership of music everyday.

Streaming is everything. U2 aren’t your problem, they’re just a symbol, just an outfit that are in a position to play the modern game and make it work to their advantage. The current generation of teenagers aren’t buying music (trust me, we know a father of two of that generation) they know where to get everything free, they will never pay for music. And the smaller acts that still need to make a living? Sorry guys but you’re not competing for the same dollar/pound/euro yen as U2 are. No more than this article is competing with the guy who’s getting paid to say the same thing for The Guardian. U2 aren’t the problem you’re facing.

U2 were facing some of the same problem. They were well aware that nobody was waiting for the new U2 album. They knew that the record stores (the ones left) weren’t going to open to Joshua Tree levels of demand. They knew their new work would limp off the shelves. They knew this as Prince knew it before his commando/guerrilla tour brought him a level of awareness that he would have struggled to generate by actually just releasing Plectrum Electrum. As Bowie knew it when he announced a new album out of the blue and watched it out-perform his previous two (equally good) albums.

U2 just took this to the next level. U2 just did it faster.

And, obviously, see you with the follow up that you’ll have to pay for later in the year, see you in the enormodomes at £95 a pop next summer. Nobody pretended it was charity, it was just a damn good gimmick.

You can practically guarantee that the first two tracks, The Miracle (of Joey Ramone) and Every Breaking Wave, will open their gigs. You can hear the Where The Streets Have No Name guitars where you would expect to hear them. You know that Song For Someone will be the new Stuck In A Moment on this tour. You know where the lights will go up and where the lights will go down. It’s a late period U2 album, it sounds like a late period U2 album, like a good late period U2 album. People who like that kind of thing will like it. The whole process made easier by the fact that they’ve already got it.

They’re not reinventing the wheel. They’re not changing the world. Except they may just have. Audacious.