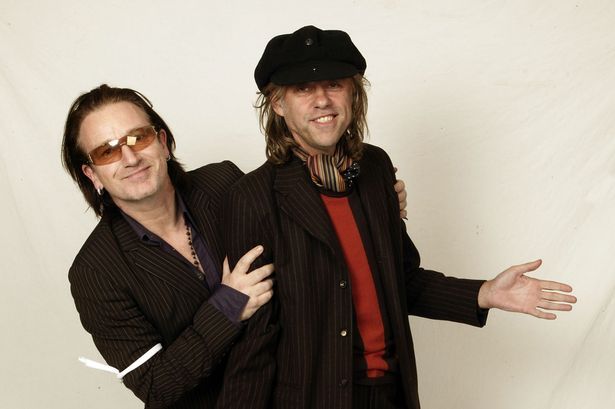 Another decade, another Band Aid

As Band Aid 30 storms to the top of the charts, Getintothis’ Shaun Ponsonby looks back on the history of the charity single and why it simply has no place in today’s music scene.

What a difference thirty years makes.

When Geldof and Ure first put Band Aid together in 1984, it was the greedy 1980s; Thatcher, Reagan and every man for himself. So, it might have been refreshing to see something like Do They Know It’s Christmas? and its even more saccharine US counterpart, the seventeen hour long We Are The World. The concept was simple: there’s a famine in Ethiopia, let’s try and raise some money.

The all star charity single was a new concept, one that inspired other similar singles for a few years, all equally terrible. There was Canada’s Tears Are Not Enough, the heavy metal community’s Stars. There’s actually a bizarre level of enjoyment to be had watching such projects from other parts of the world, such as Norway’s Sammen For Liven.

The only one we’ll admit was pretty awesome, though, is Sun City from Steve Van Zandt’s Artists United Against Apartheid, which at least had the decency to be upbeat and include George Clinton, Joey Ramone, Miles Davis, Lou Reed and Afrika Bambaata in what might be the strangest collective of artists to ever record together (and that includes the band that Neil Young was in with Rick James in the 60s).

Although the songs may have been mainly terrible, we don’t wish to bad mouth the artists taking part too much. Even if it is sometimes insincere philanthropy, it’s preferable to sincere apathy.

At the time, the reaction was largely positive. The selfless deed (if the added publicity and self-righteousness don’t count) made headlines for the right reasons. Geldof, considered a has-been at the time, was suddenly transformed into a hero.

Of course, that could have been partially peer pressure. These days, you can sit in anonymity and bitch about this kind of thing, a luxury one didn’t have pre-internet. Now, you can look at a comments section and realise that you’re not the only one who holds a negative view of all of this. For a long time, art made for charity has gotten away with being lousy, but it seems more people are willing to say: ‘ I don’t care if Children In Need is for a good cause. I wouldn’t be able to kick that shit off the TV fast enough if it was broadcast under any other context than charity’.

Although, there was some parody of it, such as this excellent Spitting Image sketch.

By the time you read this, Band Aid 30 will have inevitably hit the top of the charts, raising money for Africa during the Ebola crisis. The reaction thirty years later is…well…mixed. Few people have referred to it as controversial, but it has been as divisive as just about anything in recent memory. Miley Cyrus did it all wrong when she started twerking on Robin Thicke’s crotch at the MTV Awards. She should have released a charity single instead.

Some of the criticisms haven’t necessarily been valid. Bryony Gordon in The Telegraph spent almost an entire article complaining about artists donating time while asking us to donate money. But this is an unfair presumption. How does she know that the artists aren’t also donating money? How dare she? She doesn’t know these people or what charities they’re involved with. That’s like us proclaiming that Gordon eats live cats based purely on the fact that we have never seen her not eat live cats.

But some have been fair points. Damon Albarn was one of the first to pipe up, telling Channel 4 News: ‘Our perspective and our idea of what helps and our idea of what’s wrong and right are not necessarily shared by other cultures. There are problems with our idea of charity, especially these things that suddenly balloon out of nothing and then create a media frenzy where some of that essential communication is lost and it starts to feel like a process where if you give money you solve the problem, and really sometimes giving money creates another problem.’

This seems to be a sentiment echoed by a number of prominent Africans in the media. Robtel Neajai Pailey is a researcher at the School of Oriental and African Studies. She has been particularly vocal, telling Al Jazeera that the song was ‘offensive then, and remains offensive now’, continuing that such Western charity songs are ‘patronising, redundant and unoriginal’. Appearing on Radio 4’s Today, she also accused the song of ‘reinforcing stereotypes’. The point being a major reason rapper Fuse ODG refused to participate.

And then there is Geldof himself. Wow. According to him, the best way to inspire charity and goodwill amongst people is to act like a colossal prick. On Sky News, he responded to criticisms of the campaign not with intelligent discussion, but with ‘bollocks’. He told the world that ‘It really doesn’t matter if you don’t like this song. What you have to do is buy the song.’

That’s a pretty arrogant way of putting it. People don’t tend to respond well to that kind of bullying. Are you telling us that the only way to donate to charity to help aid Ebola is to purchase a half arsed song that even the song’s writer has professed to being ‘terrible’ for 99p? Maybe you could get away with that kind of schtick in 1984 when information was more difficult to come by but, dude, this is the 21st century. We have this thing called the internet. Fabulous invention. You may have heard of it as you’re using it to read these words right now. And I just used it to donate £20 – £19.01 more than you’re asking me to donate – to the cause without having to download a lousy song with a lousy cast.

And the cast is predictably lousy. This is the fourth incarnation of Band Aid now, and each one has featured more than their fair share of flash-in-the-pans; Marilyn, Bros, Glen Goldsmith and Gary Jules all featuring in the retrospective ‘who the hell are they?’ category, but at least they were famous at the time. This time around we’re looking at people and wondering who they are now.

I mean, really, who is this?

Seriously, who is this guy?

We’re not even joking. We have no idea who this person is. Has he ever had a hit? Is he even a musician?

Forgetting the cause, there’s the song as a piece of music. It isn’t a great song to begin with, but if we’re being honest it does have the curse of the Christmas hit. It’s kind of like the in-laws. You only ever spend time with them at Christmas and try to avoid it even then. As the time draws nearer, you get this sense of dread in your stomach, and you sigh despondently when you eventually see them. But, in the end, it wasn’t half as bad as you thought it was going to be, in fact it was pretty painless. You wouldn’t choose to spend time with them, but you feel like a better person for getting through it.

Actually, this time around, they’ve changed the lyrics a bit to reflect the Ebola crisis rather than famine. That is, until you get to the end and they’re still saying ‘feed the world’, which makes you wonder why they bothered to change the lyrics in the first place. They’re not feeding the world this time, they’re trying to provide medical equipment. OK, that might not be as catchy, but it is certainly more accurate, and in some ways that’s more important. Because it doesn’t entirely make sense. It would be like if Sly & The Family Stone had told us to Dance To The Wardrobe. Dancing and wardrobes have very little to do with each other. The Ebola victims could be comfortably fed for all you know, it’s a cure for this life-threatening disease that they’re really hoping for.

Furthermore, there is the lingering question of ‘why now?‘ There have been many crisis to hit all manner of different parts of the world, Africa included, that didn’t feature a Band Aid reformation to aid it. There have been wars and diseases and tsunamis and terrorism and reality TV stars getting their own spin-offs all over the world since the last Band Aid. Without dismissing the seriousness of Ebola, why have they decided that this particular crisis deserving of a new Do They Know It’s Christmas? Is it just that Ebola had the common decency to break out during one of Band Aid’s landmark anniversary years? Did Band Aid 26 not have enough of a ring to it for the 2010 earthquake in Haiti?

Perhaps more so than celebrities being self-righteous, the backlash is against an outdated idea. Something that may have worked in the 1980s, but doesn’t work anymore. In 2014, information is easier to access. We don’t need to raise awareness because it’s already trending on Twitter. We can see how Africans feel about our big, gaudy Western idea of charity. We can find where to donate with much greater ease. Because of this, we don’t take kindly to somebody worth millions with suspect tax arrangements ordering us to buy a crappy song.

When Bono entered the studio to record the song, he said that they want to ‘make Band Aid history’, meaning they want to reach a point where we don’t need to make records like this. Maybe we’re already there. It’s Christmas time, and there’s no need.