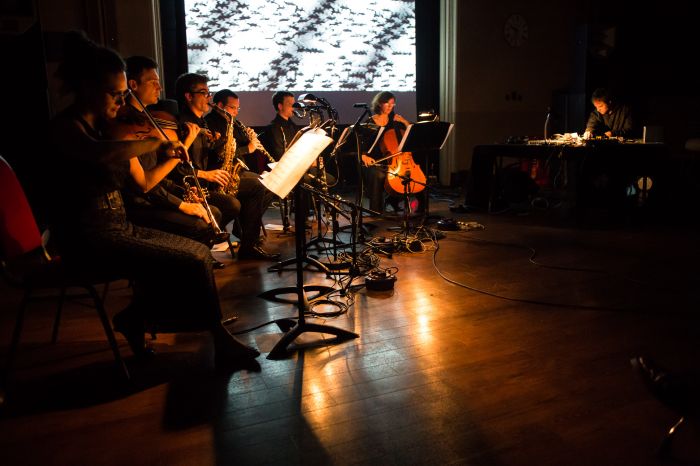 Thanks to the ubiquity of high-technology and its commercialisation, listening has quickly evolved into an experience that is more accurately described as audio-visual rather than simply aural.

Syndrome have been putting on several shows to address the multitude of avenues that this line of thinking has to explore. Its 2.4 show was an example of how to scratch its surface and plunder its depths.

The event was not only the first of a powerhouse 2014 edition of Liverpool Music Week but also the highlight in a week’s worth of events put on for the Open Circuit Festival; a new series of events in the sonic arts put on by the most audio-visual of departments, the University of Liverpool’s School of Music. It’s clear that the movement of music events into all round experience events has begun (the Liverpool Festival of Psychedelia being another great and successful example) and all for the better.

First up were The Hive Collective with their piece, Engineering Joy (3.0). Having not seen the previous instalments of their work, it’s hard to grasp the full scope of it as a whole. 3.0, however, was very clearly concerned with links between death and sensuality, all shot through a diffused wall of interconnected technology.

Beginning with a recreation of drowning, the visual and sound created a claustrophobic and unsettling impression of a near-death experience but also played on the idea that death was an aesthetically thrilling moment.

Leading into this, its next section presented a more voyeuristic presentation between human and technological interaction, with sounds being recorded on stethoscopic microphones and images of skin pulsating through macro lenses.

The next performance was an entirely different amalgamation of ideas in the form of The Aleph performing live to a new film, The Good Eater (2014).This played more with the traditional idea of audio-visual form, feeling at times like the audio-visual methods of silent cinema of the media’s first twenty-or -so years.

The Aleph’s musical eccentricity is best summed up in the outfit’s name. It is actually a short story by Jorge Luis Borges about a fixed point that, when viewed, can show every moment in time; past, present, and future. Musically, there is a similar idea here with just about every possible form finding its way into the performance – from circus waltzes, to electro-pop round Henry Purcell’s Dido’s Lament and back again to King Crimson-esque riffery.

This all played to the largely photographic film by Craig Sinclair (collaborating with photographer Simon Gabriel), recalling the form of Chris Marker’s La Jetée (1962) but with a knowing nostalgia for something unfathomably lost in childhood.

After a brief interlude, the main bulk of the performance began; a monolithic experience of ideas by Vessel (of Tri-Angle Records), The Immix Ensemble and Sam Wiehl. There seems to have been an unspoken cross-over between high avant-garde composition and intelligent electronica for some time now, yet the mixture of musical ideas seems to have peaked here, creating something that was deeply immersive and hypnotic.

Texturally, the classical elements flitted between an almost ambient pianissimo contrasted with jagged Bartók-like aggression, with the occasional Philip Glass cello line and a gradually built atonal cacophony. Bouncing around with these elements, Vessel’s electronica melted into the ether, blurring the line between the reality of the technology and the otherness of the sounds it was actually producing.

The visual elements looked into industry and texture through machinery and the textile industry. The patterns of fabric that formed seemed to create a polar to the jaggedness of the music with one suggesting a serenity of finished production while the other crying out to show the violence that went into making it.

One moment in particular stood out where Wiehl’s surreal vision realigned the mundane image of a sewing machine into a 2001-style obelisk; floating around in the void, its meaning lost without its operator. It was a pretty apt moment to finish on for an event reconnecting creative humanity with its increasingly overarched obsession with technology and its glitches.

* Immix round off their season of immersive neo-classical electronic ambience at Static Gallery on Wednesday November 19, 7.30pm.