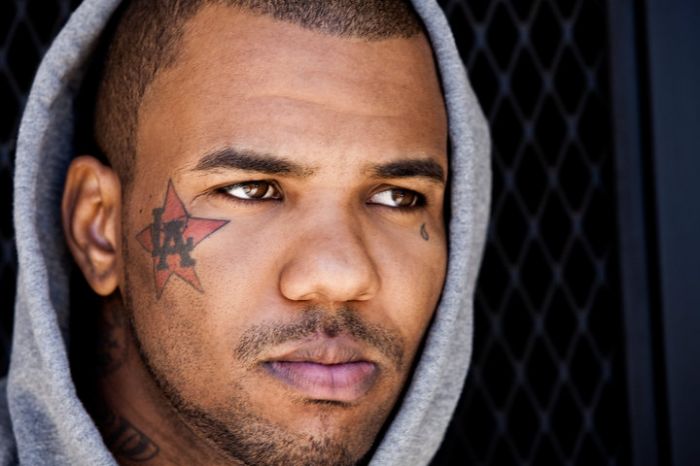 As The Game’s groundbreaking rap album The Documentary reaches its tenth birthday, Getintothis’ Joel Richards discusses the making of it and reflects on its legacy.

18 January 2015 marked the tenth anniversary of the release of The Documentary by Jayceon Terrell Taylor, better known as The Game. This album has had an enduring impact and in many ways did much to change the face of the West Coast rap scene.

The recording of the album was aided by West Coast legend Dr. Dre. with high profile production provided by Kanye West, Scott Storch, Timbaland and more. With guest appearances including 50 Cent, Eminem, Nate Dogg and Faith Evans, all the ingredients were there for an artist who had previously attracted plenty of hype.

However, life before fame wasn’t so straightforward for Taylor. Born in Los Angeles on 29 November 1979, he grew up in the Compton neighbourhood of Santana Blocc, an area infamous for gang violence. Although primarily a Crip gang neighbourhood, The Game grew to be a member of the notorious Bloods gang.

In many ways a life dominated by gang culture seemed pre-ordained. Gang culture dominated The Game‘s formative years. He has previously recalled as a youngster seeing both of his parents preparing to go on drive-by-shootings. His father was a Nutty Block Crip and his mother a Hoover Crippelette.

After recovering from the shooting, which left him in a coma, The Game pursued a rap career and was discovered by Dr. Dre. who signed him to his Aftermath Entertainment label.

All these incidents and more are recalled on The Documentary. The album gets off to a strong start, with Westside Story combining a simple keyboard part and beat which is catchy and features 50 Cent on the chorus.

From there, we’re taken straight into Dreams, a song that’s dedicated to Yetunde Price – half-sister of Venus and Serena Williams – who was shot dead during a gang shoot-out in Compton in 2003. Produced by Kanye West, the track takes on a Martin Luther King-esque speech from Game with reference to how far he’d came since he “woke up from that coma in 2001.”

That is followed by arguably the stand-out song of the LP, Hate it or Love it. Featuring 50 Cent, the two combine to deliver an upbeat chorus and timeless classic that still resonates now as much as it did on first release.

But what makes this album all the more celebrated is the ultimate fallout between the pair. In a 2005 Vibe Magazine interview, 50 Cent stated he was brought in by Interscope Records to work on the album, which he claimed was on the verge of being shelved and The Game being dropped from the label.

However, in an interview with Funkmaster Flex, The Game said his status was never uncertain nor was he ever close to being dropped. Additionally 50 Cent also claimed that he wrote six of The Documentary’s eighteen tracks and was not receiving proper credit for his work. The Game however denied the claim, saying 50 Cent helped to write just two songs.

From there, a long running dispute was born, with 50 Cent and The Game regularly releasing bootlegs attacking the other in the years to come.

Overall the first half of the album contains “upbeat, gangsta-boogie” tracks with the other half including “smoothed out R&B manoeuvres”. Both sides complement each other well.

The main achievement of The Documentary, and ultimately its longer term impact, was to revive the West Coast rap scene. This had been in decline long since the days of N.W.A. and 2Pac, having been overtaken by artists from the East Midwest and South.

Consequently it’s safe to say The Game’s place in the history of rap is undeniable, even if he’s failed to hit greater heights compared to his predecessors or his contemporaries.