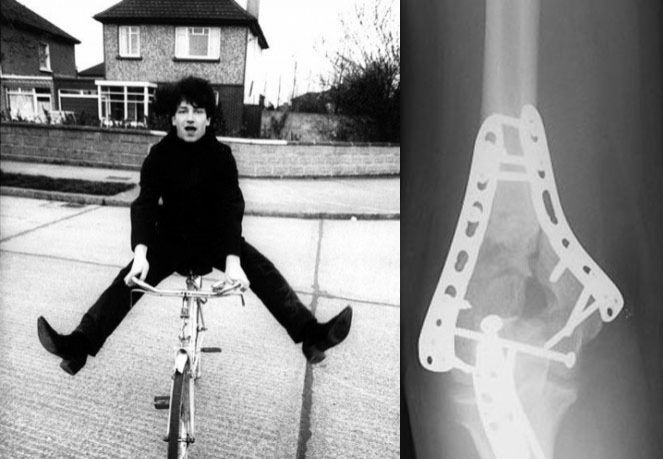 After recovering from her sympathetic elbow pains and finally finishing her 100 greatest Bono solo’s playlist, Getintothis’ Vicky Pea offers the U2 front man some salient advice.

You’ve probably heard the devastating news that Bono just doesn’t know if he will ever be able to play guitar again after falling off his bike.

I know what you’re thinking – first the glaucoma bombshell, now this. It took us a few days to get to grips with the news and after reluctantly entering into the grief cycle (denial, anger, bargaining and depression) we eventually came to accept this fate.

Now instead of resting on our laurels and leaving Bono to deal with this difficult situation by himself we thought we should offer him the support he deserves. Cakes were discussed, along with collages, a video of supportive messages, a little mini crochet The Edge doll.

However, what we decided he really needs right now is inspiration: a reason to go on strumming and some heroes to look up to, so we’ve put together this collection of amazing guitarists who riff against the odds to put a smile back on Bono’s beautiful face.

Most people are probably aware that at age 17 the Black Sabbath legend chopped clean off the tips of two fingers on his left hand while working at a sheet metal factory and considered abandoning the guitar. Well praise the dark lord he didn’t!

Unsurprisingly playing with the injured fingers caused too much pain so creatively he produced the plastic finger tips he continues to use today. Toni still needed to make adjustments at first – such as using banjo strings until the introduction of light gauge strings – and looking back he admits it may have been easier just to switch hands but at the time felt like too much of a challenge.

In fact when he was about to chuck the playing in it was a friend who convinced him to continue by showing him a clip of our next guitarist.

For a long time Django was considered to be up there with the best guitarists in the world, especially in the inner circles of european jazz and had the prestigious honor of being the first European jazz guitarist to make any major contributions to the discipline.

After losing the use of this third and forth fingers on his left hand due to a fire at age 18 he continued to break new ground with the support of his brother who brought him a new guitar to help with his rehabilitation.

With just his index and middle fingers he would perform his famous solos while accidentally creating a new playing technique called ‘hot jazz’ which still pops up today mainly in traditional gypsy taught players.

You can catch Keith in action most weeks with his band Xander & the Peace Pirates around Liverpool as one of the resident bands at the Cavern. They’ve had their fair share of success, supporting Bon Jovi, playing with Keith Richards & Jeff Beck all after being picked up by Gibson to play at their showcases.

Keith’s performances really are something to behold and ears alone you couldn’t separate Keith from any established rock n roll guitarists which is credit to his natural skill and passion for the instrument.

This death metal band from Montana has a hardcore lead guitarist and singer, who unlike Keith has decided to leave the right arm out of it entirely. An elusive internet star he still remains unnamed, known only by Southpaw.

Tony Meledez has no arms. Tony Meledez is a guitarist, singer and songwriter. Tony Meledez makes my life achievements look like a dog chasing its tail. He was born without arms in Nicaragua after his mother was given Thalidomide while pregnant.

At the age of 23 he started performing in Los Angeles having learnt to play the guitar with his feet, and at 25 he played for Pope John Paul II. He continues to tour today with his band (awesomely named Tow Jam) and has won both music and humanitarian awards.

Now if this doesn’t give Bono the motivation to get back on the frets and get better than ever, well frankly we’d be surprised because if anyone appreciates a good struggle against the odds, ‘boy comes good’ story you’d expect it to be him.

However, should – despite all the good vibes and inspiration we’ve provided – his arm just not recover to its exceptional high standards, we’re sure Apple could sort him out something. 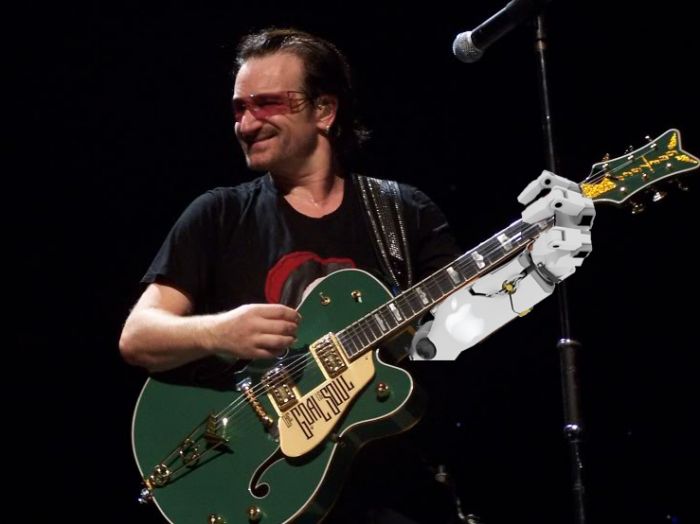