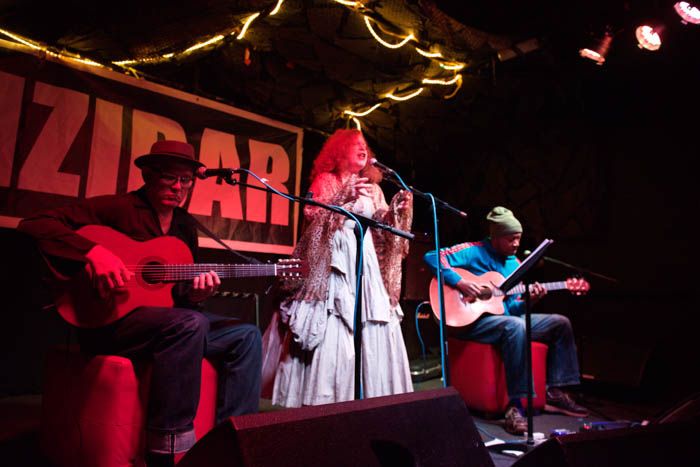 It is fair to say that Sarah Jane Morris has had an interesting and varied career.

Beginning as singer in the early 1980s with London’s politically inspired outfit, The Republic, Morris found broader fame – and chart success – as a vocal foil to Jimmy Somerville in The Communards. Notoriety was assured as her 1989 solo single Me and Mrs Jones was banned by the BBC for its lesbian content.

It is to her credit, then, that her most recent LP, Bloody Rain, feels like a high watermark in an already acclaimed career. Something of a return to her politically-inspired and Afro-influenced roots, lyrically the record focuses heavily on themes of social injustice while musically the record draws greatest influence from the continent of Africa as well having strong nods in the direction of blues, jazz, soul and folk.

Her Zanzibar set was culled almost entirely from Bloody Rain, a record that is unflinching and broad in its range of targets. Political despotism, homophobia, familial femicide (there is, after all, no “honour” in killing, only murder) and child soldiers all attract Morris‘s considerable ire.

That’s not to say that the album is downbeat and sombre. On the contrary it feels uplifting and hopeful. The songs are carried with a percussive élan and a soulful humanity so common to African music. Resonant of the We Shall Overcome defiance of the mid-century American civil rights movement, what often feels like a window into the past is a timely reminder that, sadly, lots of those themes remain depressingly relevant today.

On stage Morris is accompanied only by twin guitarists, Trinidadian Tim Cansfield and longstanding collaborator and co-songwriter Tony Rémy. It is to the credit of the two guitarists that the presence of the many additional contributors to the album was not overly missed. Where the album can on occasion sound a tad bloated, the leaner quality on display, and in particular the exquisitely fluid acoustic rhythms conjured by Rémy, gave the songs an additional sense of urgency and potency.

In particular it allowed Morris‘s voice to truly shine. And, boy, what a voice.

Deep and resonant yet honeyed and mellifluous, it positively drips with emotion and soul. Vocally expressive and powerful, the strong messages are delivered unambiguously yet humanely and with a tender angriness. Enough to make you sure of the rage yet also to feel the hope and positivity.

Songs such as No Beyoncé brought home the futility of so-called honour killings, Bloody Rain pointed its fire at governments who don’t give a damn about their people (which, as Morris herself suggested, “could be anywhere!“) and Comfort Zone reminded that we live in a world where violence against women remains all too commonplace.

In many ways her most affecting songs were the ones most personal to her. Wild Flowers found her looking back to her uncoventional childhood while celebrating her mother’s love in so doing. The lyric “wherever there is my mother there is my home” was delivered with a tender, tear-inducing beauty while On My Way To You, her tribute to her husband, was positively dripping in romantic intent.

The set was also notable for some standout cover versions. Sting‘s Fragile was played in the memory of John Lennon, Dylan‘s We Shall Be Released was in-keeping with the spiritualism of the album, and the soul was restored to Erma Franklin‘s Piece of My Heart as it was given an African makeover. The standout cover of the night was Tracy Chapman‘s Fast Car performed with a delicate fragility after Morris had recalled being awestruck on first hearing it performed at the Mandela concert in London in 1988.

Carl Harper had opened the night with a short but brief set of plaintive solo acoustic guitar-pop that told tales of romantic travels, lost love and longing. Playing in support of his current EP, songs such as Roll With The Thunder and Different Shores were pleasant enough if veering a little to much into lyrical cliché territory.

Newer songs Queen of Hearts and Faith offered greater hints towards something bolder. Queen of Hearts was written as a tribute to his aunt at the request of his uncle who lacked the articulacy to express his feelings and Faith was blessed with a more quirky and up-beat delivery.

The message of the night was delivered by Morris herself. The album Bloody Rain was intended to turn the word FEAR into something positive. Freedom. Education. Acceptance. Revolution. On the basis of the songs and the performance, it may well go some way to achieving its lofty ambitions. 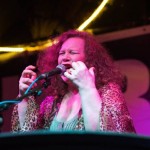 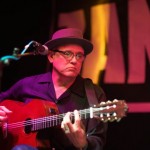 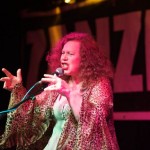 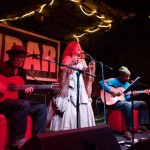 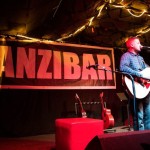 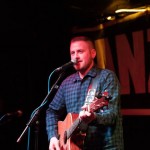