This week The Replacements announced their UK return, Getintothis’ Shaun Ponsonby somehow manages to pull himself together long enough to report.

It’s finally happening. We were told it wouldn’t. We were told we were crazy dreamers. But we had faith…and now The Replacements are coming to the UK.

They reformed in 2012 to record an EP to help pay former guitarist Slim Dunlap’s medical bills and have performed sporadically ever since. Usually at US festivals, sometimes with Green Day’s Billy Joe Armstrong on guitar, at least once with frontman Paul Westerberg lying horizontally on a couch for 80% of the performance. And on June 2nd, they’re playing a one-off headline show at London’s Roundhouse. The only shows in recent times that have matched this on the “ohmygodwecantbelievethisishappening” scale are Kate Bush’s Before The Dawn shows last year.

The Replacements might just be the most important alternative rock band of all time. As Brian Fallon of The Gaslight Anthem has said, you can see the ‘Mats (as those in the know call ‘em) in “every band that you love out there today”.  Like the Velvet Underground, the New York Dolls and their own heroes Big Star, they are part of a unique clique of bands where few people bought their records at the time, but near enough everybody who did became stars in their own right.

They were the band that everybody expected to do what R.E.M. and Nirvana eventually did and break alternative rock into the mainstream. In fact, when Nirvana released Nevermind (which, incidentally, is even named after a 1987 ‘Mats track), Chris Robinson of the Black Crowes quipped “that’s a nice little Replacements album they made there”.

On top of the group’s genuine streetwise punk credentials, mainman Paul Westerberg also had one of the best pop ears of any songwriter of his generation. Listen to I’ll Be You, Can’t Hardly Wait, Alex Chilton, Left of the Dial, Little Mascara, I Will Dare. Any one of them could have been huge radio hits. Even in the band’s earliest hardcore days, songs like I’m In Trouble combine punk angst with hooky melodies that stick in your head for hours afterwards.

He is also a wonderful lyricist, able to reflect the audience’s deadbeat insecurities and misfit fears, and to deliver it with wit, humour and angst. “Jesus rides beside me, he never buys any smokes” he sings in Can’t Hardly Wait. To an uptight but beautiful air hostess he tells “you ain’t nothin’ but a waitress in the sky” (that’s how you write a song about an air hostess, Busted!).

But there’s also Unsatisfied, where he bellows like a man possessed by his own despair, making Mick Jagger sound positively satisfied in the process. There’s Here Comes a Regular, in which he is sat in a bar in the middle of the day and asks “am I the only one who feels ashamed?”

Yet, despite all of this, it might be difficult for some to understand why their return is so exciting. Sure, their live shows are legendary, but usually for the wrong reasons. Infamous occasions include original guitarist Bob Stinson (RIP) playing shows naked except for a tutu, or standing in a trash can only for the bin to fall over mid-solo. Sets that featured only poor cover versions of AM Radio hits. They were fired from a support slot with Tom Petty & The Heartbreakers for raiding the band’s luggage and going on stage in their wives frocks. Paul Westerberg swinging from a chandelier and seriously injuring himself. Semi-regular on stage physical altercations between band members. Playing one song on their instruments, but singing a completely different one at the same time.

Of course, there is also their dramatic on-stage break up, where each member of the band was gradually replaced by roadies.

They also had a fondness for self-sabotage, and a complete unwillingness to play ball with the powers that be. When they signed to Warners in 1985, the record company gave them thousands of dollars to make a video for MTV. They handed in Bastards of Young, which consisted of one continuous shot of a speaker in black and white, and each video from the parent album, Tim, was exactly the same. When Warners said they had to appear in the videos for their next album, 1987’s Pleased To Meet Me, the videos literally consisted of them awkwardly sitting on a couch. The most action in those videos consisted of ear scratching, and ear scratching alone.

A drunken 1985 “performance” on Saturday Night Live got them banned from the 30 Rock studios. In 1985, they released the live album The Shit Hits The Fans, a horrible performance recorded by a bootlegger that even has a moment where Westerberg accidentally pushed record on the master copy and the song is momentarily replaced by a post-show mumble.

So, given this, why are we so excited by the return of the ‘Mats?

Legacy aside, the answer is simple: they’re needed.

We need The Replacements because we need the insecurity, we need the excitement, we need to believe that anything can happen tonight. We need that spirit, and nobody has ever done it better.

Judging by bootleg recording of their shows thus far, the band have been pretty tight and probably sound close to what they might have sounded like in the 80s had they got their shit together and decided they wanted to take over the world. Maybe that’s still a possibility. Stranger things have happened.

The Replacements are back! Colour us impressed! 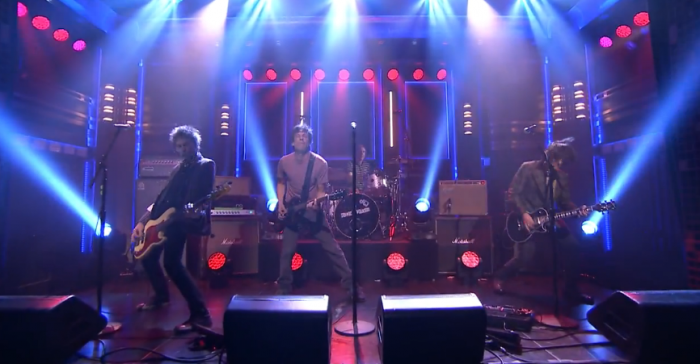