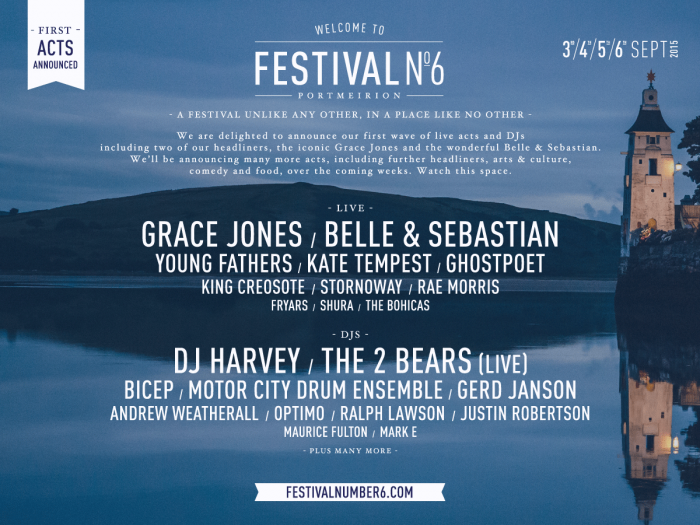 Festival Number 6 have revealed Grace Jones and Belle & Sebastian as the 2015 headliners.

The Portmeirion-based, Prisoner-themed festival will host Glasgow pop royalty Belle & Sebastian on Saturday September 5 with iconic singer-songwriter, model, actor and all-round fashionista Ms Grace Jones bringing her blend of disco-funk, pop and punk to the party in what promises to be a live set not to miss.

Belle & Sebastian, who are to also headline Liverpool Sound City in May, said: “We’re very excited to be headlining No.6 on the Saturday night. We’ve always loved playing unusual, special places and Portmeirion definitely fits the bill.”

The festival, which runs September 3-6, will be announcing a second wave of artists including the final headliner in the coming months.

Festival director Luke Huxham said: “We’re tremendously excited about this year’s festival. Our first wave of artists and DJ’s is stronger than ever and there’s a lot more to come including our third main stage headline act, another headline DJ and a big second wave of live acts.

“There are also a few surprises up our sleeves – I think it’s safe to say it’s going to be our best festival yet.”

Festival Number 6, which last year featured Beck, London Grammar, The Pet Shop Boys, Steve Mason and many more, was Getintothis‘ number one festival of 2014 in our end of year round up.

Take a look at our review and picture galleries here. And our 2013 review and gallery here.

You can be sure whoever is announced in the second wave of artists we’ll be there with bells on, cheering the Brythoniaid Welsh Male Voice Choir.