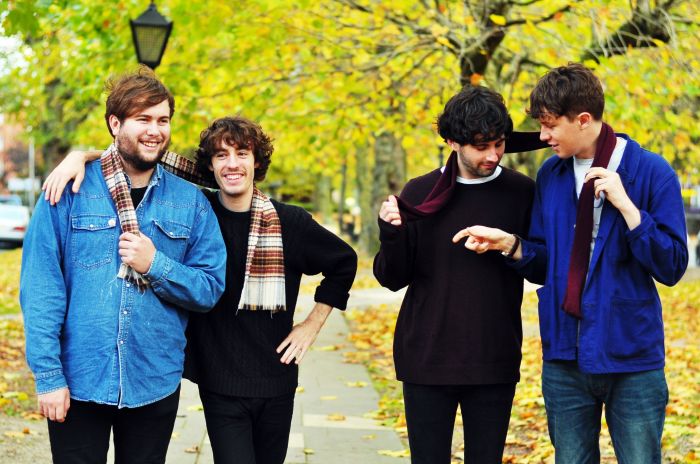 Different sport it may be but FA Cup heroes Bradford City aren’t the only club enjoying a fairytale 2015.

Hooton Tennis Club’s progress from student project to one of the UK’s most talked about bands has been meteoric to say the least and perhaps ironically for a band named after the road sign at the end of their street, it’s hard at the moment to guess just where the journey might end.

Catching up with Wirral lads Ryan Murphy, James Madden, Callum McFadden and Harry Chalmers ahead of both their GIT Award nomination and a much anticipated gig at Liverpool’s Shipping Forecast , it’s possible to sense a band both revelling in and slightly embarrassed about the speed of their rise.

Just months earlier, I’d first come across HTC (could that phone sponsorship be a call away?) when they played the opening of Edge Hill’s University new media centre. With special guest – an impressed 6Music’s Stuart Maconie – in attendance, it was clear that here was that rare thing: a brilliant band who had arrived seemingly fully formed. So how did they do it?

“That was our first gig,” says Harry with a chuckle. “It wasn’t even that long before then that we’d form – only a couple of months – but we’d known each other since high school and had done buts of music things together, but yeah, we can’t deny it’s all happened so quickly.”

Crucial to the band’s breakthrough has been Scouse svengali Carl Hunter, bassist with baggy heroes The Farm and a man who knows a thing or two about the music business in his capacity as a lecturer in media, film and television at Edge Hill.

Setting up a record label called The Label Recordings at the Ormskirk university in order to give students eyeing-up a career in the competitive industry some real hands-on experience, Carl was looking for bands to sign and happened upon an embryonic HTC.

“We’d made some EPs and people started to listen and then we made it onto Dave Monks’ BBC Radio Merseyside show. Carl picked up on it and asked us to do the thing with the label at Edge Hill and it’s all gone on from there.

“Meeting Carl was like a magic moment. He’s a fantastic bloke. He was looking for two bands and had found one but couldn’t find the other one and was going through piles of demos. We were played on the Sunday night and he got in touch after the weekend and since then he’s been an absolute inspiration.”

For the next eight months or so Edge Hill students worked on marketing HTC’s debut single Kathleen Sat On The Arm Of Her Favourite Chair, filming them at live events and organising the band’s slot at The Label’s showcase at Liverpool Sound City Festival.

For a new band it was a mutually beneficial relationship, enabling HTC to grow creatively and get the sort of priceless attention such an original innovation deserved. And for those artists concerned with paying their dues and earning your stripes who might question whether HTC have had it all a little easy, Harry is unapologetic.

“It’s strange because we don’t really know any other way. Obviously we know with most bands it can take years and years and people put loads of effort in so we know how lucky we’ve been that everything’s happened so quickly for us.

“Sometimes I feel like we’ve skipped a step. We’ve gone from nothing to feeling like this really established Liverpool band.

“I remember when we had one of our bands together we were really heavily into gigging and we’d even pay to play. We’d just play, play, play all the time but with the Hooton stuff it really started as a bedroom project and we didn’t think we’d really take it out of the house.

“We made the EPs for the hell of it really just so we could record the songs and see what we could do. We had an idea about how many songs could we do in a short space of time. There’s no one set path to it I guess.” 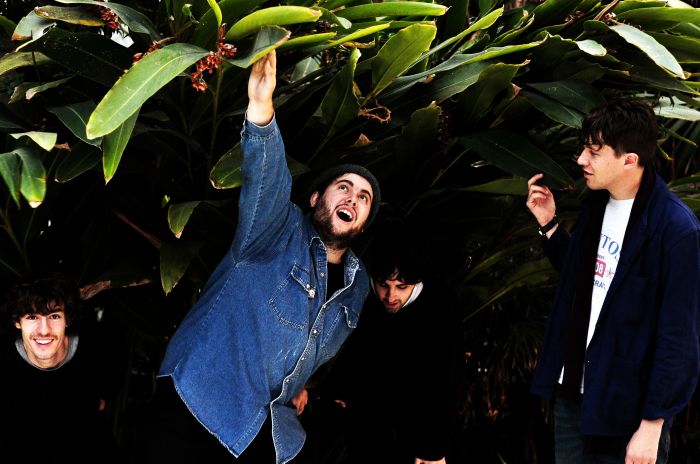 With Carl working his PR magic on the band, word soon got to Jeff Barrett of Heavenly Recordings who came to see the band at their third gig – a Liverpool Sound City showcase last May. With a history spanning two decades, Barrett’s reputation as the founder of Heavenly is wholly justified as a quick look at who has graced the roster down the years makes clear. So were the lads aware that this was the man who had discovered the likes of Saint Etienne, Manic Street Preachers, Chemical Brothers and Doves?

“Jeff is really switched on and it’s helped that Carl is so enthusiastic as well,” says Harry. “He approached Jeff about us and virtually dragged him to our gig.

“Ryan and I went to uni in Liverpool with a guy whose uncles are Paul and Martin Kelly who are like Jeff’s right hand men so we’d heard a bit about the label before but then I started to delve into it properly and do a bit of research.

“James also went to college with one of the Stealing Sheep girls but I don’t think we knew that they were on the label. It really hit home when Ryan and me where at the first Festival No.6 in Port Merion and Steeling Sheep were playing. We went down to the Heavenly stage and just thought it was completely magical experience. It really kicked us in the face and I remember thinking I’d love to be a part of this.

“With labels in general it’s only in the past few years that I’ve even looked at which label a band is on. Bands would crop up and I’d never pay any attention to which label they were on but once you do it opens up the doors to all kinds of stuff.”

A beautiful friendship was born, and after signing in September, the first fruits of the partnership can be heard on HTC’s cracking debut single proper Jasper which has been winning plaudits with its gorgeously fuzzy take on early 90s slacker pop. Judging by the band’s language the relationship is still very much in the honeymoon stage.

“I’d never really realised all the work they did,” says Harry, rather sweetly.  “Every day it’s like ‘get this sorted, then get this sorted’ but at the same time we’ve still got the freedom to do what we think is right for us.

“They are a great label and they’re helping us to do exactly what we want. They’ve not been afraid to tell us to go back and do something again but luckily it’s not been anything too major.

“Jeff’s well on the ball. We’ll get an email at about 4am in the morning and we don’t know if he’s just got in or is just getting up. He’s so enthusiastic and open minded and takes it all on board.”

Their debut single’s perfect pop might have come as a surprise for those initially drawn in by the band’s shoegazing-isms but with comparisons to the likes of Pavement and Guided By Voices ringing in their ears, Harry says the band are happy with their opening statement. Just don’t mention that it sounds a bit like Teenage Fanclub.

“It’s the poppiest song we’ve got and when it comes to defining our sound it’s there or there abouts and isn’t drastically removed from the rest,” claims Harry.

“With Teenage Fanclub it’s a weird one because I don’t think any of us have ever listened to them. When I did listen to them I really didn’t like it. To me it was really cheesy, shiny pop.

With a tour scheduled around the release of Jasper and another single in April before an album later this year, the excitement surrounding HTC is palpable but it’s still the simple pleasures which appeal to Harry.

“We checked on Spotify and Jasper has 50,000 plays,” adds Harry. “To me that’s amazing but for all I know Heavenly might be really disappointed with that. I don’t know if it’s good or bad.

“But it’s lovely being on 6music. I was in the bath the other day and I could hear through the floor that someone had it in on in the kitchen and was listening to our song. It was weird but wonderful.”