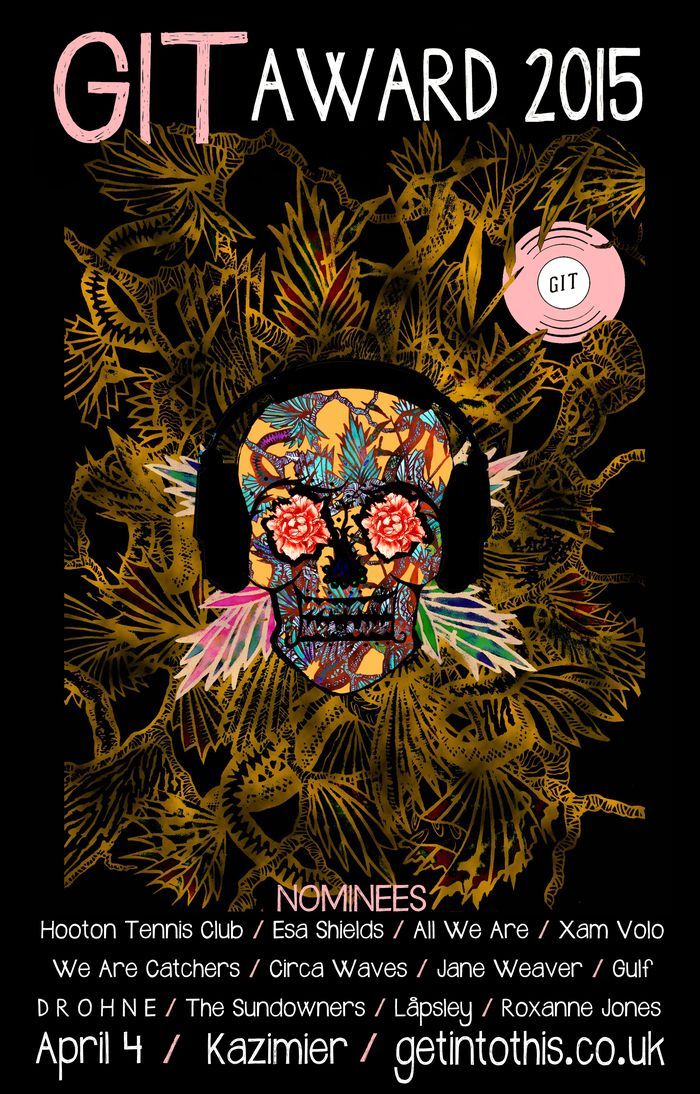 Liverpool music prize, The GIT Award, can today reveal the 12 shortlisted artists for the 2015 edition.

General manager at 4AD Records and GIT Award 2015 judge, Rich Walker, said: “What a great award to be asked to help judge.

“Working at 4AD, there’s never a shortage of new music to listen to but I’ve particularly enjoyed discovering what a fertile and supportive scene Liverpool currently has. More cities really should copy the GIT template and do their own award.”

Now in its fourth consecutive year, The GIT (Getintothis) Award, champions the best of Merseyside music providing a snapshot of the year while recognising significant artistic achievement across a range of musical styles.

And the 2015 shortlist is no different…

Reflecting on this year’s shortlist, Dot Levine, from UK Music, said: “It was a huge honour to be a GIT Award judge.

“The standard in Merseyside is exceptionally high and we have heard some incredible music. It was a very difficult task choosing the shortlist – but boy did I enjoy the debates!

“The whole process for the Award has been brilliant. As a national judge, who attended an evening of debate in Liverpool, just being surrounded by some of the most engaging and inspiring music lovers based in the north west was a great moment for me.”

Dubbed ‘the Scouse Mercury Prize,’ backed by Yoko Ono and the cornerstones of Merseyside’s flourishing cultural community, the winner of the GIT Award 2015 will be revealed on Saturday 4 April 2015 at The Kazimier in Wolstenholme Square. Like previous years, the winner will receive a specially commissioned trophy and cheque for £1,000.

Having relaunched for the fourth year at Liverpool Music Week in November 2014 up until the closing date at the end of January 2015, the GIT Award judges met on six occasions, discussing more than 330 eligible artists and bands, before carefully whittling them down to just 12.

Those 12 will now feature at the industry showcase on Saturday 4 April 2015 and will include performances from the shortlisted artists plus a dramatic aftershow featuring live music, DJs and specially produced set piece spectacles.

This year, a specially commissioned Merseyside team will transform the unique setting of the Kazimier into an Aztec Jungle while 50 lucky souls will also have the chance to log on to the Kazimier website and obtain a pass to this once-in-a-lifetime occasion.

Also on the night, a special Inspiration Award, recognising services to Liverpool’s music industry will also be presented. Previous recipients are Africa Oye (2014), Hillsborough Justice Collective (2013) and The Kazimier (2012).

Bella Union boss and GIT Award judge Simon Raymonde, added: “The waiting is almost over. The GIT Award shortlist is now finalised – and what a near-impossible job that was!

“You have 12 outstanding talents, all equally deserving of the Award. Quite how we will whittle this down to one I don’t know but the good news is that whoever does win will be a beacon of light for all future artists from the area. April 4, The Kazimier – enter it into your phone now.”

GIT Award founder and chair of judges, Peter Guy, said: “The GIT Award 2015 shortlist represents a new phase in Liverpool and the wider region’s artistic development; these artists are creating new sounds quite unlike any other and surpassing most other cities in the world.

“This year there’s 10 brand new names on the shortlist selected by judges who travelled from all corners of the UK to Liverpool to listen to them and deliver the final shortlist – it proves what a vital time in Merseyside music’s history this truly is. Saturday April 4 at the Kazimier is set to be another monumental occasion.”