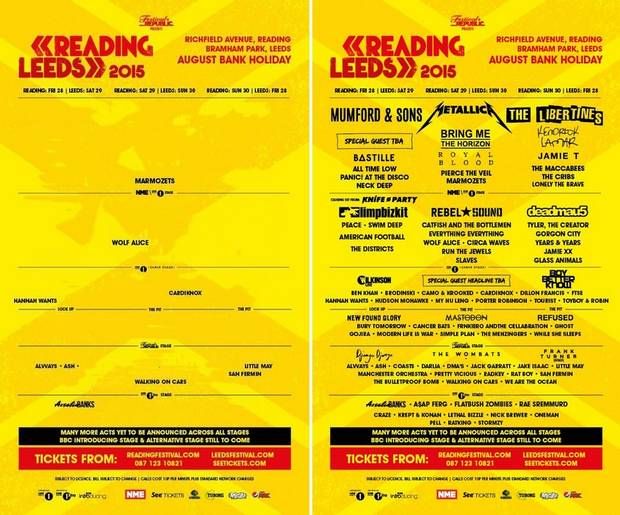 Yesterday Reading and Leeds Festival completed their 2015 line up. Today the internet near exploded when Crack in the Road published a copy of said line up omitting all acts that didn’t boast at least one female member.

Of the near 100 acts announced so far, Reading and Leeds have booked just nine that have at least one vagina between them (the Libertines excluded).

Ladies and gentlemen, I’m sure you’re aware of the fact but let me throw it out there again just for safe measure: it is 2015. We are living in the twenty first century.

Yet here we still are. In sausage country.

Naturally, as with all issues considered feminist or “women’s issues”, there was an immediate outcry of disgust, disbelief and outrage from some, and a complete whitewash campaign of defence of the damned patriarchy from others.

“This is just the way it is and always has been.”

“There just aren’t any female acts big enough or good enough to headline”.

Having given due time and consideration to the most appropriate way I might voice my impassioned rebuttal to these claims I’ve settled on the following eloquent, and I think quite fitting, declaration:

Bollocks to your “there just aren’t any good female acts out there” (Warpaint, Chvrches, St Vincent, Haim )

And bollocks indeed to your “that’s just the way things are”.

If civilisation as a whole had ever been satisfied with the way things are and always have been we’d still be sitting around a dank cave dragging our fists and grunting at each other – although having read some of the comments made about this outrageous display of gender inequality I wouldn’t be surprised if some of us still are. 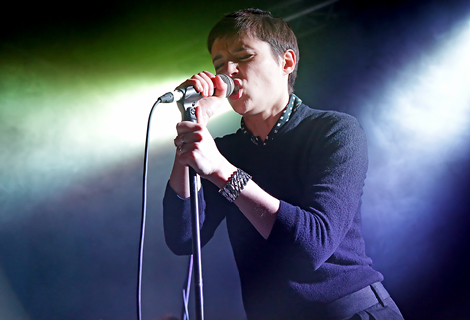 Sadly, this line up is not alone in its heavy masculine slant, female artists are under-represented on many festival bills, particularly when it comes to headline slots.

Last summer when Two Door Cinema Club had to pull out of Latitude, Lily Allen stood in and became the only woman to perform a headline slot at any of the six big festivals in 2014.

At the time, some helpful person over at The Telegraph trawled through festival statistics to paint a bigger, uglier picture of gender equality on UK festival bills.

In 2014, all female bands made up a minuscule 3.5% of artists to perform at Glastonbury, Reading, Latitude, Isle of Wight, Bestival and V Festival.

In comparison, all male bands racked up 43% of the festival slots. Reading and Leeds surpassed that already dire disparity with 56% all male bands taking to their paired stages in contrast with just one, lonely all female band, Warpaint.

Back then, Reading’s booker Jon Mac acknowledged that “a historical precedent needs to change” when it comes to gender equality on festival line ups.

However, ahead of this week’s announcement Reading organiser Melvin Benn, told Gigwise that while there has been a “historic lack of opportunity for young women to get into bands” he said he didn’t believe female acts are ‘sidelined’ and there was “an abundance of opportunity now“.

But is it the responsibility of the festival organisers and booking agents to balance the gender scales?

Emily Eavis believes so. She was quoted last year as saying that Glastonbury “consciously” tried to meet a balance of male and female acts, placing high importance on slotting some of those women at the top of the bill.

Perhaps not ideal candidates for Reading Leeds headline sets but it does go to show that the big female acts are out there, they just happen to cluster at the ‘poppier’ end of the spectrum.

However, flipping that argument on its head, the Reading Leeds bill is so diluted from its original demographic that it now boasts the likes of Mumford & Suns who would have been drenched in bottles of urine quicker than you can say, ‘Daphne and Celeste‘.

We could diverge into the question of why women are more attracted, or more likely to gain notoriety, in a genre that relies much more on image (and generally a highly sexualised image) rather than artistic merit. We could also discuss if that has anything to do with a general tendency to take pop less seriously as a credible genre.

But lets stick to the bottom line.

Melvin Benn may defend his team’s booking decisions with an emphasis on artist ‘quality’ rather than equality but when it comes down to it we all know that the greatest driving force behind his and many others’ booking choices come down to money.

Festivals book the big hitters who put bums on seats (or wellies in mud) and sell tickets, we live in a consumerist world, that’s just the way things are – right?

I can give you a few reasons – Madonna, Whitney Houston, Kylie Minogue, Britney Spears and more recently, Beyonce. Let’s call them forerunners, pioneers, precursors, and most importantly role models.

When it comes to the nitty gritty of it, this problem is the same problem that women encounter in business, sport, politics and every other global stage where men still dominate and hog the spotlight. If girls and young women don’t see female artists on that stage they’re far less likely to strive for it themselves.

It goes right back to the playground where kids pretend at being in a band – the boys get to play drums and bass and guitar and rock out as the front man, and the girls get to stand in formation looking pretty and singing backing vocals that consist of nothing more than over-enunciated vowels.

It’s going to take another Blondie, PJ Harvey, Bjork or The Slits to bring forth that next generation of festival headline female artists that trade on their own talent and artistic merit rather than a team of stylists, choreographers and song writers. And it’s going to take those profit-driven festivals to give them a shot, because God knows they’ve already got the rest of the world against them.

Should all the major festivals introduce an all female shortlist when it comes to booking 2016? We’d call it a worthy investment.