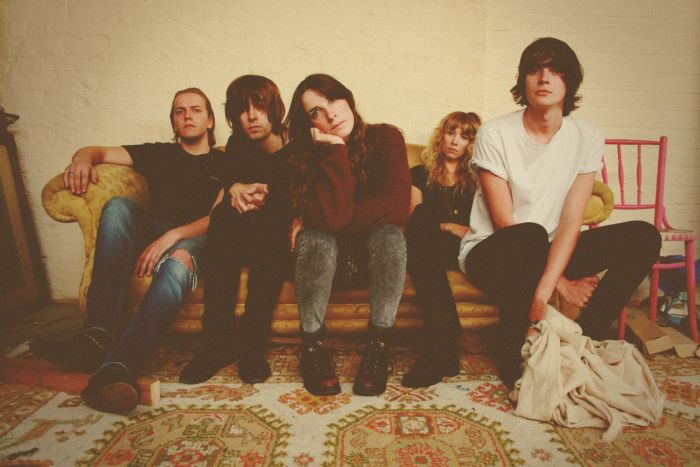 With a UK headline tour and debut album finally under their belts, Getintothis’ Adam Lowerson spoke to the Sundowners about the long journey which has brought them here.

“We were at practice just last night going over old tunes which were great at the time. But we were laughing about them, they just seemed so naive, and if that was out there on a record you wouldn’t be able to take that back. I’m glad we’ve evolved and got to where we are now, and the stuff that we’re putting out is the first record and is what we’ll be known for forever,” says Fiona Skelly of Wirral psych-rockers the Sundowners, telling Getintothis about the long growth and development of the band.

Now, with a debut album under their belts, a successful nationwide headline tour behind them and support slots with the Modfather himself Paul Weller in the pipeline, it feels as if the Sundowners have finally arrived.

Regulars on the Liverpool music scene will know it hasn’t always been that easy for the GIT Award 2015 nominees, and it was the formation of Skeleton Key Records that gave the five-piece the break that they’ve worked for over the last four years. Over the years a lack of money has stopped the band from making the album they have wanted to on a number of occasions, and at times, as co-vocalist Niamh Rowe admitted, nearly brought the band to breaking point.

“You go through time and years and nothing has happened, and you just think what are we doing this for? I’ve got no money, I still live at home and I’m trying so hard and getting nothing back, it brings you down.” However, she adds that every time it came close to all coming to an end, a lifeline, like their appearance at Glastonbury festival in 2013, was handed to the band to spur them on further. “Every time we’ve got to that point of being really down something like Glastonbury would pop up, or something like Skeleton Key would form. So there’s always been something which has given us a boost again.”

But it’s these ups and downs that Fiona thinks has inspired much of the group’s songwriting, resulting in their self-titled album. “Every time something has happened and given us that momentum again we’ve written a whole bunch of new songs. I think the way it’s all happened is meant to.” This is something which Niamh agrees with, “Even though it’s been really frustrating and felt trivial at times everything has happened when it was supposed to.”

It does certainly feel like the band have been slowly building towards this moment for several years now, and this was reflected in the rapturous welcome given by a packed out crowd at their recent Kazimier show, bringing their UK tour to a climatic close. They’ve been working hard towards this for years now, and it finally seems to be paying off.

The resulting record, which was produced by the brothers of Fiona and guitarist Alfie, James and Ian Skelly, feels like a band who have finally nailed their craft. Crowd favourite and one of the oldest tracks on the album Hummingbird is given a new west coast psychedelic sheen, but new tracks such as Into The Light, Who We Are and Medicine really outshine it.

The krautrock inspired drums of Jim Sharrock give the sound an arena sized lift while Alfie Skelly’s psych guitar lines and Niamh and Fiona’s soaring harmonies keep the dreamy feel that has been the Sundowner’s trademark since they first took the the Zanzibar stage four years ago.

This new, refined sound is something which Niamh thinks is down the freedom the band were given by James and Ian when recording the record. “They don’t try to force you to do anything, they guide you but they don’t force you. If we were on a major label and they’d said we don’t like this this and this so go and change it. But if James disagrees with something we’re doing he won’t force us to change what we’re doing. He’ll still say this is how I feel about it, but you can still disagree which is good.” Fiona adds, “They make us work really hard. They never try and mould us but they guide us a lot.” 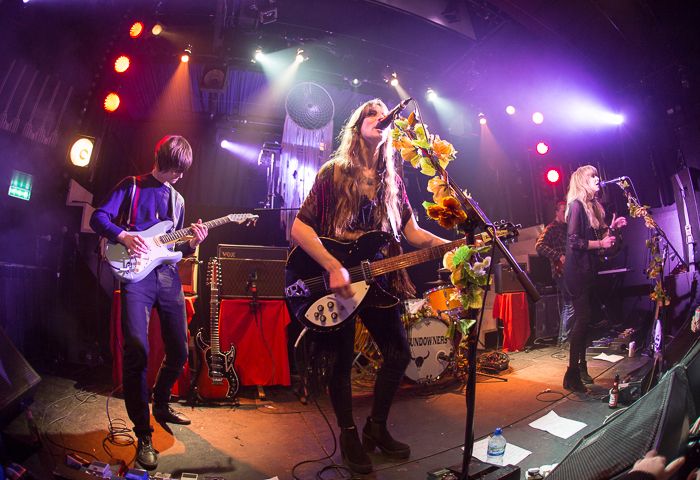 The Sundowners at the Kazimier

Obviously, the family ties between the band and their producers play a big part in this creative freedom. Having members of one of Liverpool’s most successful bands the Coral acting as mentors will certainly draw attention to the Sundowners, but Fiona believes that it’s the trust that comes with working with family which has really helped them. She said “Even down to the photos and stuff, Ian has been our photographer for most of it. So all the photos we’ve done, that’s Ian. So we haven’t got some like fella telling us to crawl on the floor and growl at the camera.”

2015 is already looking to be a hugely busy year for the Sundowners, with tour dates all over the UK still on their way in the coming months – the aforementioned support slots with Paul Weller – and they believe that the timing of their GIT Award nomination will come as a huge boost. Niamh said “It’s nice, it feels like you’re accepted in the Liverpool scene, so it’s good. We were all flattered and made up about it.” Fiona added, “Because we’re over the water, things that happen in town we’ve missed out on a lot of the time. We don’t really expect to be included in a lot of stuff, so it’s a nice surprise.”

A Wirral band they may be, but they certainly now feel like one of the main players in the Liverpool scene, and it is a scene that they feel they owe a lot to. Niamh said “We learnt really how to play live well in Zanzibar. That was where we played our first ever gigs. We’ll definitely go back in the future and do gigs there. We love it there, it always has the best sound, crowd, atmosphere, so the Zanzibar definitely taught us how to play.

“There’s so many good bands. What I like about Liverpool bands is that no one gives up, they just keep going. There’s a strong scene and a strong connection between all the bands.”

With a second LP already in the works, the rise of the Sundowners has been a long one. At times it has looked like it might not happen, but now they’ve got a debut record to be proud of, and a whole load of new fans they’ve picked up across their UK tour. They’re a band who are a shining light for how hard work can really pay off.

They’ve seen the highs and lows, and their journey has given Niamh a pretty strong opinion of the music industry. “It just seems like it’s become very middle class and you’ve got to have money to make it. But we’ll keep striving.”