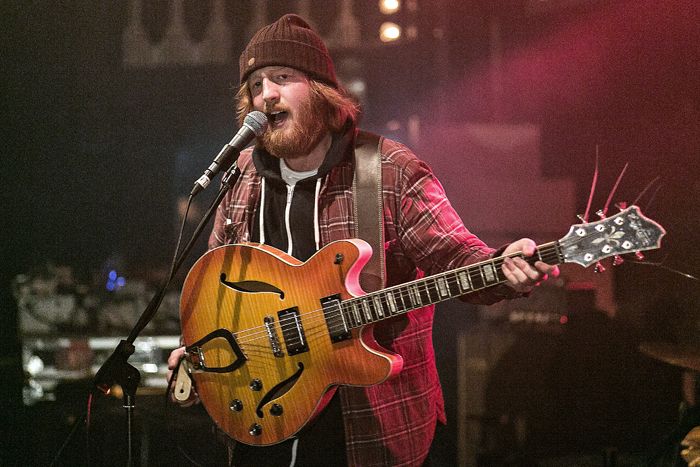 It was quite the lineup down at 24 Kitchen Street as Getintothis’ Patrick Clarke caught Strange Collective in the form of their lives among superlative support.

A more exciting quadruple-bill of grassroots Merseyside talent could hardly be imagined. Even with the headliners’ cultish draw of psych-tinged garage rock aside, with the incendiary punk of Ohmns, the opaque elegance of RongoRongo and the spikey grooves of Holy Thursday all on the bill, before a note’s been struck or a whammy bar waggled our expectations are high.

It’s a shame not many made the super-early kick-off, Holy Thursday taking to a thin on the ground though still fairly expectant crowd.

That their half-hour’s an excellent one yet still slightly short of the astronomical standards they’ve managed to set for themselves is testament to the foursome’s talent, who push through slightly blunt mixing for a much-more than adequate warm up.

Sumptuous four-part harmonies hover cloudlike atop clenching grooves, spikes of guitar and worming, winding riffs, yet nothing quite ignites in the audience. Probably because there’s about ten of us, but they deserve more nonetheless.

It soon becomes clear that this steadily filling room waits for one band only, and as Strange Collective‘s Alex Wynne arrives at the night, sauntering and shaking hands with just about everyone, it’s clear that RongoRongo, next up on the stage, are to have similar trouble drawing the crowd’s full attention.

Like their predecessors they’re great in themselves, slightly shaky vocals the only real flaw in an eclectic, brooding textural cauldron. They peak on their faster efforts, the blistering cuts of guitar and shadowy choruses of Shiver hitting more of a mark among the throng than less immediate, slower-to-unfurl numbers like Slice of Heart.

By the time garage-punk newcomers Ohmns hit the stage they’re welcomed by a substantial set of onlookers, and their frenetic few tracks are the first to fully hit their sweet spot with a propulsive set interrupted only by the occasional unintelligible on-stage banter (something about Craig Charles and Takeshi’s Castle if memory serves us correctly).

The set feels a bit like a running tour through the history of punk, only skipping the years 1977-80. There’s times they recall the proto-punk fire of MC5 and The Stooges, others when they hit on brutalist PiL-ish grooves. What ties it all together is simply energy, buoyed by a crowd beginning to find their feet.

Even newly-energised by the ferocity of the lead support, the change that comes over Kitchen Street as Strange Collective finally take their place is nothing short of remarkable, an indication of just how deep the adoration’s become as a result of long-standing live reputation.

It still seems remarkable they’ve just one official single to their name, and on tonight’s showing a minor disgrace they’ve not got more, for tonight both reaffirms their potency as a live act, and their incredible potential as a recorded one.

They fire through a varied and immensely enjoyable forty minutes or so, unique and earworming riffs forming a raucous dovetail with Wynne‘s relentless, characterful vocal, backed by a rough-and-ready rhythm section that sways, pulls and careers to the edge of chaos.

Though they touch on marked influences from their garage-rock guardians (Thee Oh Sees, White Fence), the set is entirely their own thanks to smatterings of psychedelia and a good-old-fashioned sense of fun, shared by a crowd who leap and clamour to every punch of fuzz. A worthy end to a night full of potential, leaving nothing but optimism for the newest wave of Liverpool’s musical resurgence.