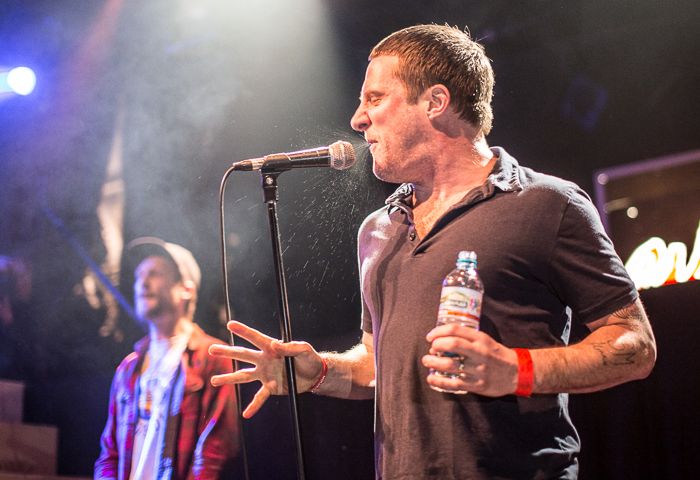 It was one of those night’s at The Kazimier that had everyone buzzing well into the next day, including Getintothis’ Jamie Bowman.

Anger, as John Lydon once put it so beautifully, is an energy. But despite the erstwhile Sex Pistol‘s maxim holding true almost 30 years after he sung it, it’s an emotion rarely tapped in today’s music.

With this in mind, it’s a pleasurable shock to the system to be confronted with a band like Sugarmen. Barely out of their teens, this band of one-time Liverpool scruffs have smartened up their image and their sound to an extent where they’re barely recognisable from so many groups their age. Frontman Luke Fenlon’s Bolan-esque curls have been replaced by a tight quiff and with the rest of the lads donning leather jackets and black drainpipes there’s a definite feeling of the last gang in town about these youngsters.

While they’re undeniably sharp looks-wise, so thankfully are the songs, as snotty punk anthem after snotty punk anthem emerges from Fenlon’s mic. With guitarist Chay a taut study of cool on guitar, Sugarmen are blessed with two perfect leaders and there’s something of the Libertines about the way they interact effortlessly on the Kazimier stage.

Of course, we Brits are good at this type of thing and it’s hardly suprising to spot the Fagan-like figure of Clash legend Mick Jones lurking in the shadows watching a band who at times resemble his former lot so closely he must be pondering suing them rather than producing them. But as Fenlon dedicates a song to the NHS (“our NHS” he corrects himself) before launching into an impeccably visceral cover of Lou Reed’s Hanging Around it’s hard not to think the future is in safe hands.

Where Sugarmen are all tension and release, Hooton Tennis Club offer a more relaxed take on life’s frustrations. With flannel shirts and floppy fringes to the fore, they take their musical cue from US slackers like Pavement and Guided By Voices but their charming tales of smalltown inertia are imbibed with a lovely languid sense of Englishness. Debut single Jasper is an absolute corker of a song, held together by a stunningly loose guitar riff and lyrics so lazily non-committal (“We go to galleries once in a while / And stand around at look at paintings all day“) it’s barely made its breakfast. There are plenty more aces in the pack too with the likes of Kathleen Sat On The Arm of Her Favourite Chair showing their sloppy shoegaze is as tuneful as it is loveable.

And so to the main event. On paper, Sleaford Mods sound almost too good to be true. A perfect band for these imperfect times, made up of a pair of n’er do wells who look like they’ve come straight from a Channel 5 documentary about surviving benefits. In recent months Jason Williamson and Andrew Fearns have been tagged as voices of a generational underclass with their tales of dole queues, hangovers and crap lives getting many a critic hot under the collar. To top it all, vocalist Williamson was born in Grantham, the hometown of Margaret Thatcher. Here it seemed were Thatcher’s children in all their misanthropic glory, ready to tear down the barricades with their electro beats and swearing.

As a result there’s a strange sense of anticipation in a by now packed Kazimier. Those who’ve seen and heard the duo are full of nervous excitement while the rest are standing with folded arms thinking ‘come on then, let’s see what you’ve got‘.  It makes for a brilliantly charged atmosphere and when Fearns wanders onto the stage with all the grace of a pizza delivery man and plugs in his laptop what follows is quite simply one of the most astonishing hours of music this writer has ever seen.

As Fearns stands back and lets his machinery spew out it’s sparse mix of electro and tinny dub, Williamson launches into a savage tirade of a song called Bunch of Cunts whilst appearing to mimic a combination of Mark E Smith, Richard III and music hall legend Max Wall as he barks out a succession of pop culture references and swear words in a thick Nottinghamshire accent.

If that sounds horrible, you’re right, but so compelling is Williamson as a presence it’s impossible to keep your eyes off him. Bunch of Cunts is followed by a succession of similar sounding diatribes (“This one’s about cunts too” jokes Williamson by way as an introduction to one) called things like Jolly Fucker (“Ian Beale tight trunks / Grammar wanker“),  Fizzy (“work my dreams off for two bits of ravioli and a warm bottle of Smirnoff under a manager that doesn’t have a clue“) and Tiswas (“I’m not bothered, I never was / Here’s a crap joke from Spit the Dog“). Best of all is Tied Up In Nottz opening line which insists that “the smell of piss is so strong that it smells like decent bacon“.

Quite who or what, Williamson is angry with never becomes clear and instead you’re left to surmise it’s simply everyone  from David Cameron’s hairdresser to Razorlight frontman Johnny Borrell who gets it both barrells in 6 Horsemen (The Brixtons) deconstruction of London hipsters (“Johnny Borrell fucks off to an island for four months at the height of his fame. Was the country bothered? Was it fuck. He made a massively bad calculation.”)
The sheer physicality of Williamson’s performance is extraordinary as he stalks the stage with a succession of nervous ticks, mad stares and blown raspberries. The contrast between the energy he’s exuding and the apparent stasis of Fearns who does little more than chuckle and drink lager only makes it funnier.
And here’s the problem. A quick glance around the crowd shows people grinning from ear to ear but is that the point? As Williamson pours his heart out in the bitter tragicomedy of Jobseeker (“Can of Strongbow / I’m a mess / Desperately clutching a note on depression“) how are we supposed to feel? Sympathetic? Amused?
How Sleaford Mods avoid being a here-today-gone-tomorrow novelty is their next challenge. For now let’s just rejoice in something so different and vital it screams to be heard. 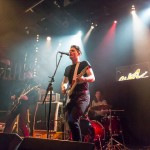 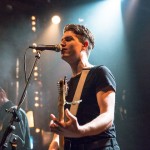 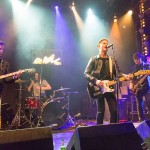 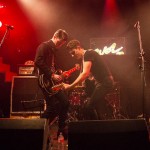 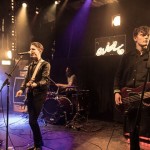 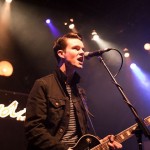 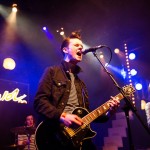 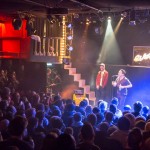 Sleaford Mods at the Kazimier 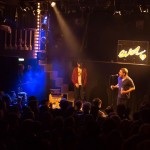 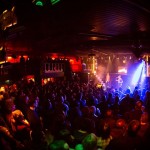 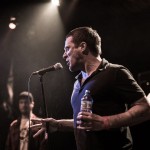 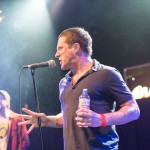 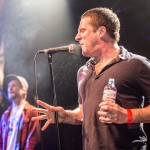 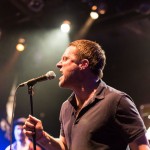 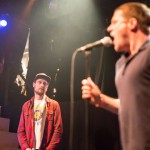 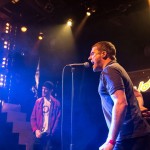 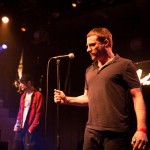 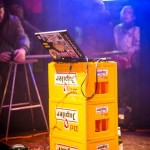 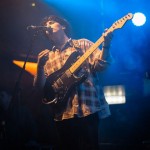 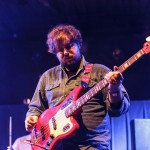 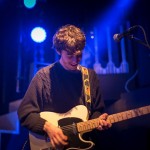 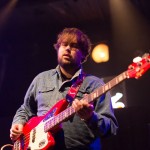 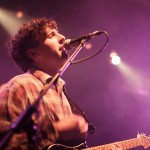 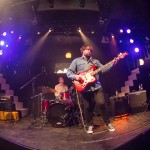